Here is a synopsis of the state of the US economy in 2019, for average hard working Americans, the 80% of us. We all know that for the top 20% and especially that top 1%, the US economy has been doing great.

But if you are like most Americans without significant stock investments beyond a 401k company retirement plan, than the Dow records demonstrating soaring gains in the stock market in 2017 and 2018 don’t mean much. Most Americans haven’t been invited to this Wall Street party.

In short, If your wages have been stagnated for decades and you’re not significantly invested in the market, you’re out of luck.

In all, just 54% of Americans invest in the market at some level, either through individual stocks, mutual funds, pensions or retirement plans like a 401(k), according to Gallup. That’s down 11% since the Great Recession of 2008-2009. (84% of all stocks owned by Americans belong to the wealthiest 10 percent of households.)

As per a 2/8/2018 NY Times report by Patricia Cohen, “A whopping 84 percent of all stocks owned by Americans belong to the wealthiest 10 percent of households. And that includes everyone’s stakes in pension plans, 401(k)’s and individual retirement accounts, as well as trust funds, mutual funds and college savings programs like 529 plans.

“For the vast majority of Americans, fluctuations in the stock market have relatively little effect on their wealth, or well-being, for that matter,” said Edward N. Wolff, an economist at New York University who recently published new research on the topic.

We the people as the vast majority who have been shut out of the booming US economy for rich folks, have been lied to by the republican President Donald Trump with his GOP cohorts in the US Senate. Recall that in December 2017, they claimed that their mega 2017 tax cuts would generate enough extra revenues to pay down the addition of $1.5 trillion dollars being added to the US deficit over a 10 year period.

But there are recent published CBO Congressional Budget Office estimates for the years 2019-2029, that prove otherwise. It details that after 2019, annual economic growth is projected to slow —to an average of 1.7 percent through 2023, and from 2024 to 2029, economic growth and potential growth are projected to average 1.8 percent per year—less than their long-term historical averages. With this rate of growth, there will never be    enough additional revenues to cover the add-on of $1.5 trillion dollars over 10 years to the US deficit. 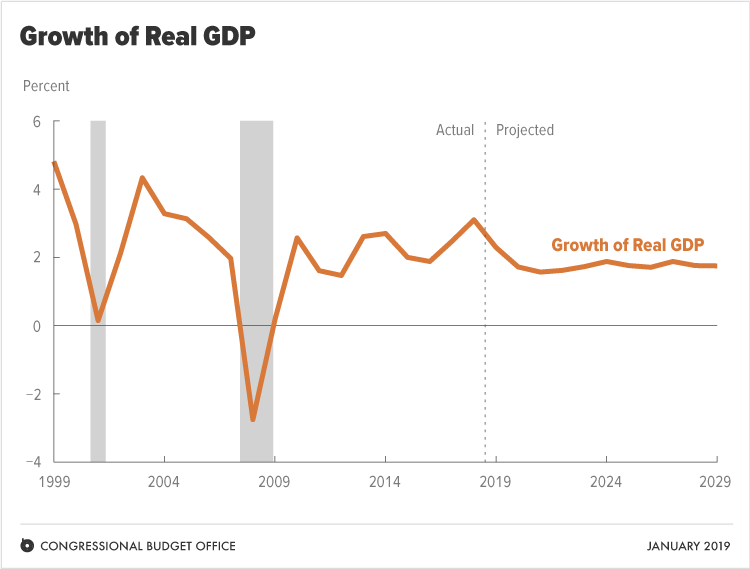 Don’t forget that we were told about how many additional  jobs would be created as businesses would have extra monies, because of the tax cuts, to invest in expansion and other projects. Only this didn’t happen as most company executives decided to use these extra funds for stock buy backs.

Then it wasn’t bad enough that we the people were snookered by GOP over these 2017 tax cuts, but the republican president over a 2019 funding dispute in December 2018,  forced a government shutdown that lasted 35 days which cost the US economy an estimated $11 billion dollars where $3 billion will never be recovered.

The construction of this US SW border wall was a promise the president delivered repeatedly to his supporters at his numerous campaign rallies as a way for him to drive home his intent to cut back on immigrants as many were convinced that immigrants were the ones taking their jobs and for keeping wages depressed. In short, the president and many GOP lawmakers, leaders have been complicit in provoking peoples fears based on very misleading divisive information. There are numerous reasons as to why the American average worker is correctly  feeling financially squeezed which have nothing to with immigrants like the increased usage of technology within corporations, changing markets and consumer demands where all reduction in jobs are decisions made by corporate executives

See: Foxconn factory jobs touted by Trump will not come to pass

See: Dear US Corporations, What’s Happening In Paris Can Happen Here, In The USA

As per a 1/25/19 NY Times report, “The Hidden Automation Agenda of the Davos Elite” by Kevin Roose, “They’ll never admit it in public, but many of your bosses want machines to replace you as soon as possible.”

“I know this because, for the past week, I’ve been mingling with corporate executives at the World Economic Forum’s annual meeting in Davos. And I’ve noticed that their answers to questions about automation depend very much on who’s listening.”

“In public, many executives wring their hands over the negative consequences that artificial intelligence and automation could have for workers. They take part in panel discussions about building “human-centered A.I.” for the “Fourth Industrial Revolution” — Davos-speak for the corporate adoption of machine learning and other advanced technology — and talk about the need to provide a safety net for people who lose their jobs as a result of automation.”

“But in private settings, including meetings with the leaders of the many consulting and technology firms whose pop-up storefronts line the Davos Promenade, these executives tell a different story: They’re racing to automate their own work forces to stay ahead of the competition, with little regard for the impact on workers.”

It’s my opinion that the president and the GOP lawmakers have done squat to lift up the lot of average tax paying Americans in 2017, 2018, except for overseeing an economy with a low unemployment rate. Wages are still stagnant and whatever growth there’ has been, has been eaten up with inflation

Then let’s not forget about the president’s trade wars/ tariffs with our neighbors and friends where Americans were sold the concept that they would be getting a better deal which would translate into fewer jobs being diverted to different countries as CEOs figured out that it was much better for their bottom lines if products were manufactured abroad because labor costs were less expensive. Well, so far, that’s not working so well, either. 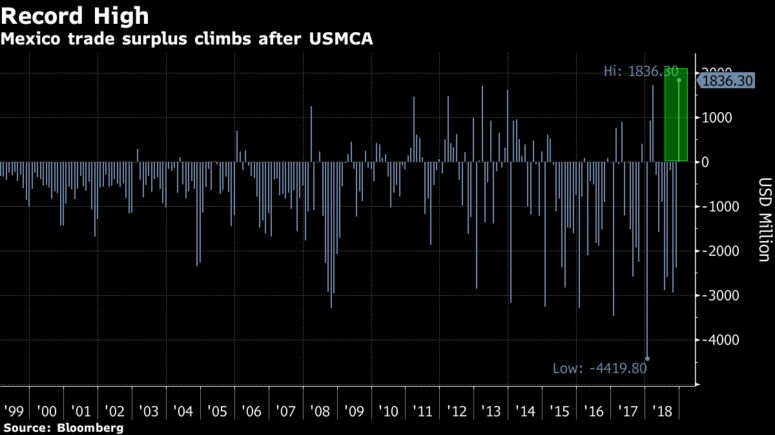 Here’s info as to how tariffs effect American workers…

As per a January 28, 2019 Bloomberg report by Nacha Cattan and Rafael Gavol:

“Mexico posted its highest trade surplus on record in December despite efforts by U.S. President Donald Trump to reduce the nation’s shipments to his country by redoing the North American Free Trade Agreement.”

“Mexico, which sends the majority of its exports to the U.S., saw its surplus soar to $1.8 billion, the most for any month since data has been collected in 1999. Automotive exports rose 7.4 percent from a year earlier to $11.5 billion dollars, while oil-product imports fell 15.5 percent to $1.38 billion.”

After more than a year of negotiations, Mexico, the U.S. and Canada signed their new trade deal in November known as USMCA. Trump had threatened to cancel Nafta if Mexico and Canada couldn’t reach a deal that he said would bring the countries closer to balanced trade. The legislative bodies of all 3 countries need to ratify the new agreement.

Car production and demand has recovered amid less uncertainty over Nafta,” said Marco Oviedo, chief Mexico economist at Barclays. “It seems that the new deal implies business as usual and that car exports should continue to be an important component of trade.”

“On the other hand, domestic demand appears to have weakened at the end of the year, he said. “Domestic demand seems weak while the new government is reducing oil imports.”

Link to get to EPI graphs: productivity and wages relationship 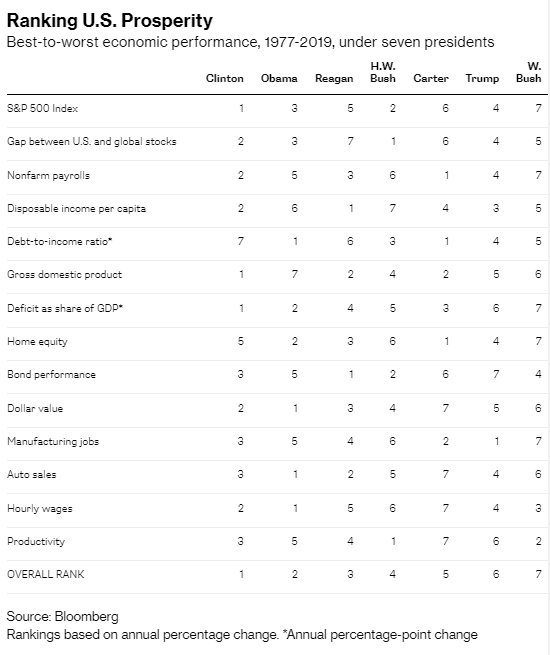