Dear Readers, I’ve found myself becoming a very angry human being by following closely the political shenanigans of our President Donald Trump. It’s time to take a break from news watching. I’ll be back blogging in a couple of days.

I just had a couple of days in a row where I found myself ready to blow up while having a conversation with a couple of individuals who voted for President Trump.

The problem is that acting like a crazed democrat, I know that I’ll never at least plant the seeds for looking at things from a different perspective.

Thanks for hanging in there until I return. I am so grateful of all your support.

My Thinking on FL. freshman US Senator Rick Scott

The Republican Party ex-Governor and freshman US Senator Rick Scott representing the State of Florida has been in Washington DC  for just a few weeks where he should be keeping his head down as he learns the ropes. But he couldn’t stand it as he was no longer a center of attention. So, he pens an op-ed piece for the Washington Post with a lot of GOP talking points’ bashing of the Democrats for not going along with the president’s SW border wall; and then he trots out the tried and true declaration that there’s a deal to be had. It’s not like there haven’t been numerous past attempts that the republican President Donald Trump has nixed. It’s obvious that he hasn’t done his homework on this subject of the wall or he wouldn’t be making assertions that most of us know have been debunked over and over again.

The last I checked, there were over 6,000 comments left by readers with the majority being negative.

I would suggest that he take the time to do his home work regarding the president’s demands for a SW border wall by talking to those who know something, like a fellow GOP US Rep. William Hurd who actually represents people living in border areas in Texas. Rep. Hurd is a shining GOP star, ex-CIA agent who could give Mr. Scott a realistic run down of what’s been happening.

As per a 5/5/17 Politico report, (William)  Hurd is also unafraid of bucking the GOP and the president himself, especially in the interest of his district. He denounced Trump during the campaign, distancing himself in particular from the candidate’s rhetoric about Mexican immigrants. He voted against Ryan’s health care bill in early May, knowing the toll it would take on the many poor, isolated constituents he represents.

“And he has emerged as perhaps the most vocal opponent of Trump’s plan to build a wall along the southern border, which he argues would hurt trade, send the wrong message and fail to keep out intruders.”Washington is talking about Hurd as a bonafide superstar who could represent the future of the Republican Party…”

For Rep. Will Hurd’s views on the wall see: will hurd border wall

On February 1, 2019, the Floridian republican freshman Senator for the Washington Post penned the following opinion piece, “I’ve been a senator for three weeks. Washington is worse than you’ve heard.”

“I’ve been a U.S. senator for three weeks now, and I can tell you that reports of hate and incompetence in Washington are severely understated. Things are actually much worse than they appear.”

“One year ago, I called on Congress to make a simple deal on immigration requiring both Republicans and Democrats to do two things — compromise and respect the wishes of the American people. This deal is so logical and so easy, even politicians in Washington should be able to grasp it. But, as the events of the past few weeks have shown, they cannot.”

“Democrats would have to agree with the American people that our border needs to be secure, and that we need some kind of physical barriers to secure it. It’s not complicated; it’s common sense.”

“Republicans would have to agree with the American people that “dreamers,” kids who grew up here after being brought to the United States by their parents, must be welcomed into our society. Again, it’s common sense.”

“That’s it. That’s all. Done. It is simply asking politicians to agree with the voters and do something practical and logical. In what parallel universe is this a hard decision? Answer: Washington.”

“The truth is, the vast majority of Republicans are ready to make this deal, and are ready to provide a route for the dreamers. But Democratic leaders are not ready to make this or any deal. Sure, the Democrats have voiced support and cast votes for border security in the form of physical barriers in the past, but they won’t do so now because of their hatred of the president of the United States.” 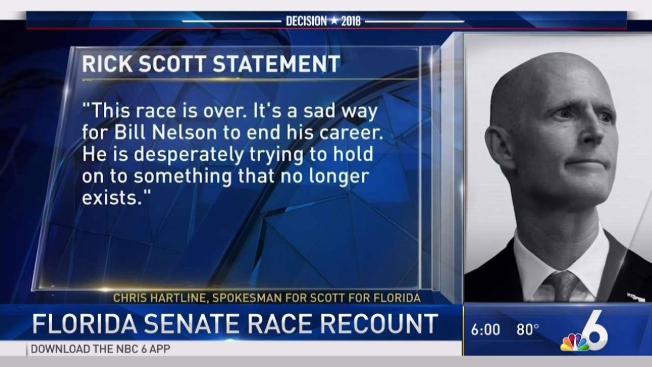 “Hate is bad that way; it clouds your judgment. As former senator Alan Simpson said at the funeral for former president George H.W. Bush, “Hatred corrodes the container it’s carried in.” That’s the predicament that Democratic leaders find themselves in now. They hate President Trump so much that they cannot behave in a rational manner.”

“My state of Florida is home to more than 27,000 dreamers. The notion that we would — after educating them, protecting them and raising them — kick them out of the country, well, it’s just absurd.”

“Let’s be very clear here: I am inflexible when it comes to illegal immigration. I am against it, always have been and always will be. The president was completely correct when he said that we don’t keep our doors locked at night because we hate the people on the outside, but rather because we love the people on the inside.”

“Florida is home to nearly 21 million people, more than 4 million of whom are Hispanic. They want fairness for these dreamers. But guess what else they want: a secure border. That’s right, and it’s not something you hear on the news, but it is true: Hispanics want border security.

“In a post-election survey of 1,014 Hispanic voters in Florida, my campaign asked this question: Thinking about our nation’s immigration laws, do you think we need stricter or looser enforcement of these laws?”

“Sixty-nine percent of the respondents said we need stricter enforcement of our immigration laws, while only 29 percent preferred looser enforcement.”

“Securing our borders with a physical barrier is not a partisan issue, it’s a common-sense issue. Likewise, once we agree to secure our borders, it is only common sense to deal fairly and justly with the dreamers.”

“There is only one thing standing in the way of this common-sense solution for America: irrational and clouded thinking motivated by hate from Democratic leaders in Washington.”

Link to entire article: I’ve been a senator for three weeks. Washington is worse than you’ve …