Abuse of power? Corruption at the highest levels? How is it that FOX TV has become the republican President Donald J. Trump’s propaganda machine.

What until you learn about how FOX TV and the White House have been playing revolving doors where high level personnel go back and forth between the two organizations. 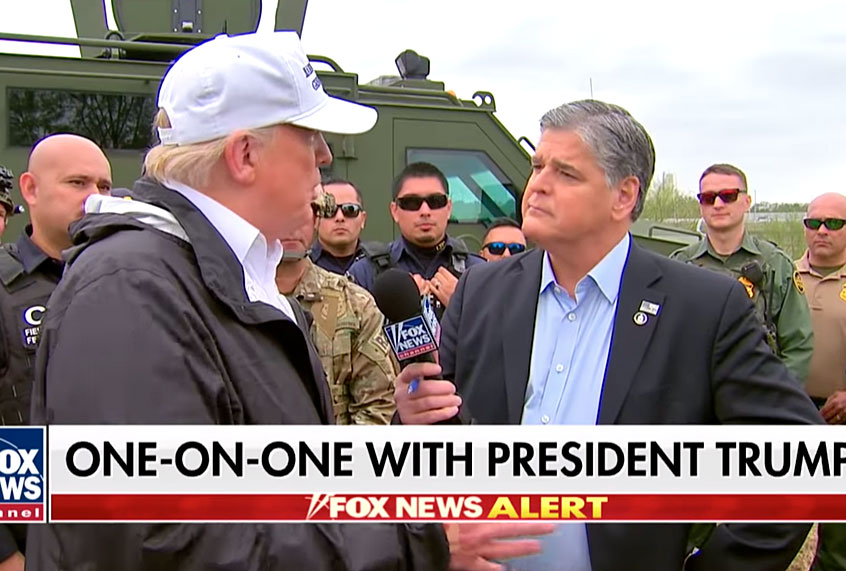 Here is the rest of the story..

The New Yorker is publishing a March 11, 2019 report by Jane Meyer, “The Making of the Fox News White House” on the 4th of March, 2019. “Fox News has always been partisan. But has it become propaganda?”

“In January, during the longest government shutdown in America’s history, President Donald Trump rode in a motorcade through Hidalgo County, Texas, eventually stopping on a grassy bluff overlooking the Rio Grande. The White House wanted to dramatize what Trump was portraying as a national emergency: the need to build a wall along the Mexican border. The presence of armored vehicles, bales of confiscated marijuana, and federal agents in flak jackets underscored the message.” 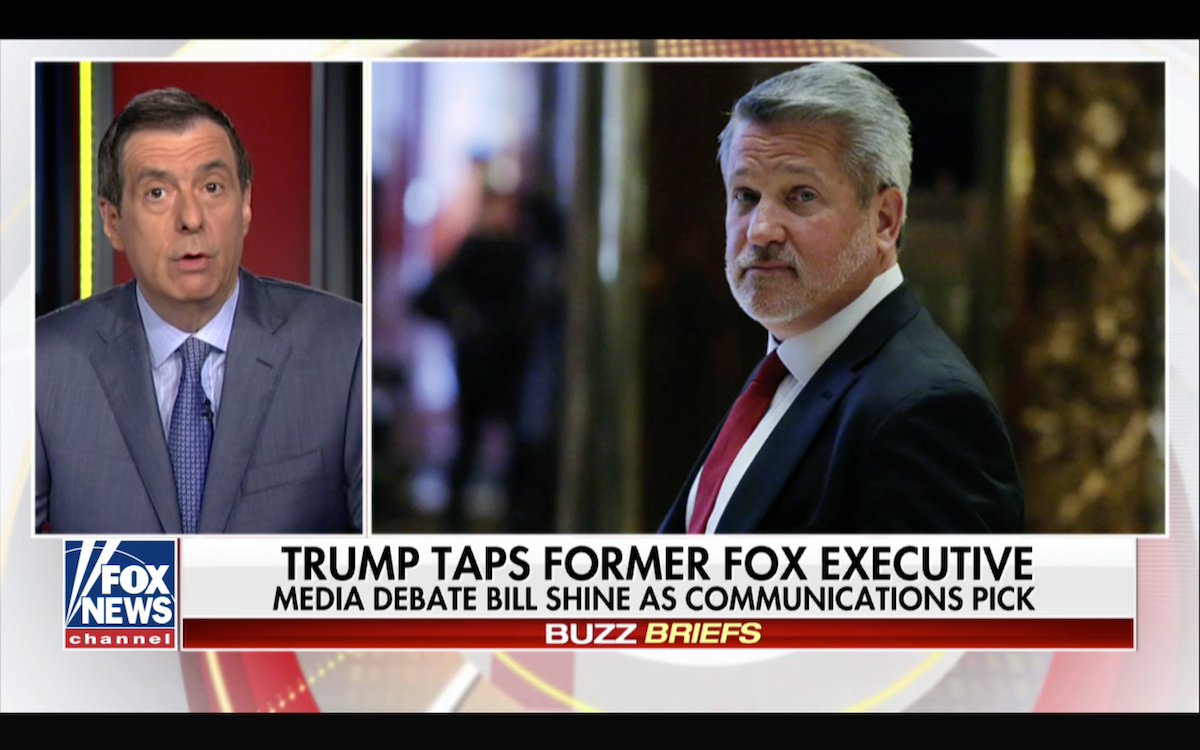 “But the photo op dramatized something else about the Administration. After members of the press pool got out of vans and headed over to where the President was about to speak, they noticed that Sean Hannity, the Fox News host, was already on location. Unlike them, he hadn’t been confined by the Secret Service, and was mingling with Administration officials, at one point hugging Kirstjen Nielsen, the Secretary of Homeland Security. The pool report noted that Hannity was seen “huddling” with the White House communications director, Bill Shine. After the photo op, Hannity had an exclusive on-air interview with Trump. Politico later reported that it was Hannity’s seventh interview with the President, and Fox’s forty-second. Since then, Trump has given Fox 2 more. He has granted only 10 to the 3 other main television networks combined, and none to CNN, which he denounces as “fake news.” 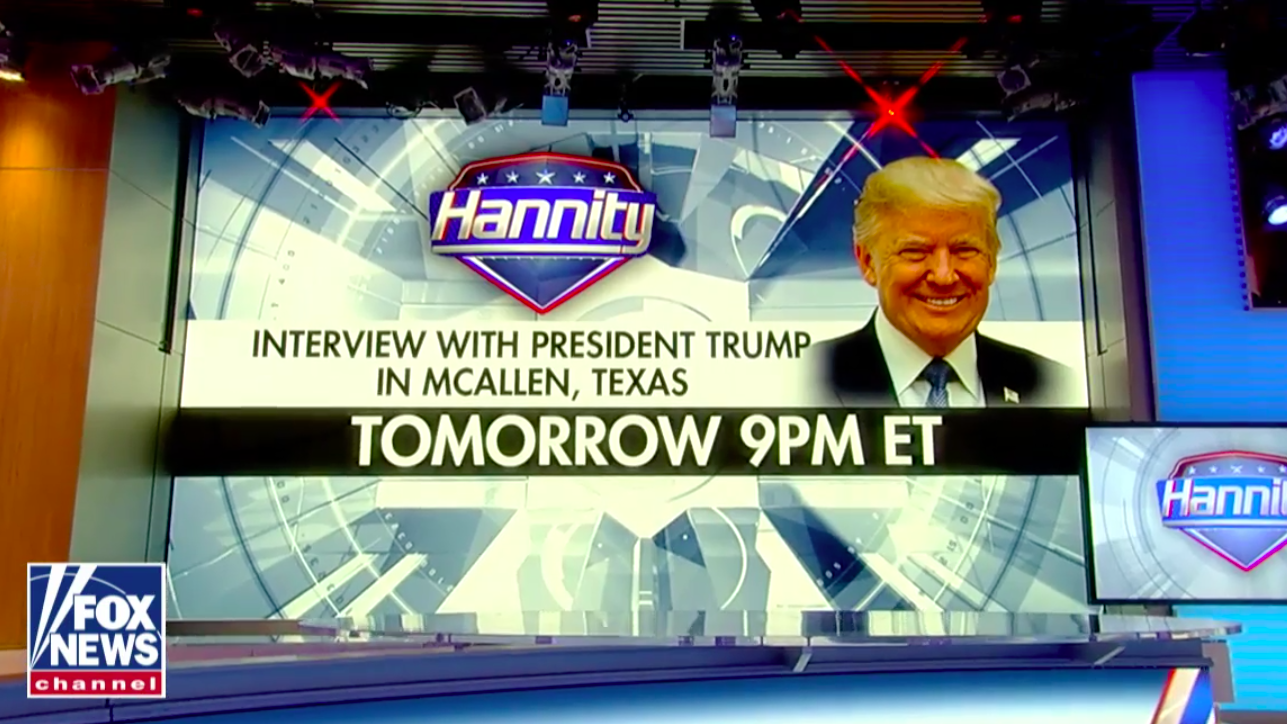 Hannity was treated in Texas like a member of the Administration because he virtually is one. The same can be said of Fox’s chairman, Rupert Murdoch. Fox has long been a bane of liberals, but in the past two years many people who watch the network closely, including some Fox alumni, say that it has evolved into something that hasn’t existed before in the United States. Nicole Hemmer, an assistant professor of Presidential studies at the University of Virginia’s Miller Center and the author of “Messengers of the Right,” a history of the conservative media’s impact on American politics, says of Fox, “It’s the closest we’ve come to having state TV.”

“Hemmer argues that Fox—which, as the most watched cable news network, generates about $2.7 billion a year for its parent company, 21st Century Fox—acts as a force multiplier for Trump, solidifying his hold over the Republican Party and intensifying his support. “Fox is not just taking the temperature of the base—it’s raising the temperature,” she says. “It’s a radicalization model.” For both Trump and Fox, “fear is a business strategy—it keeps people watching.” As the President has been beset by scandals, congressional hearings, and even talk of impeachment, Fox has been both his shield and his sword. The White House and Fox interact so seamlessly that it can be hard to determine, during a particular news cycle, which one is following the other’s lead. All day long, Trump retweets claims made on the network; his press secretary, Sarah Sanders, has largely stopped holding press conferences, but she has made some thirty appearances on such shows as “Fox & Friends” and “Hannity.” Trump, Hemmer says, has “almost become a programmer.” 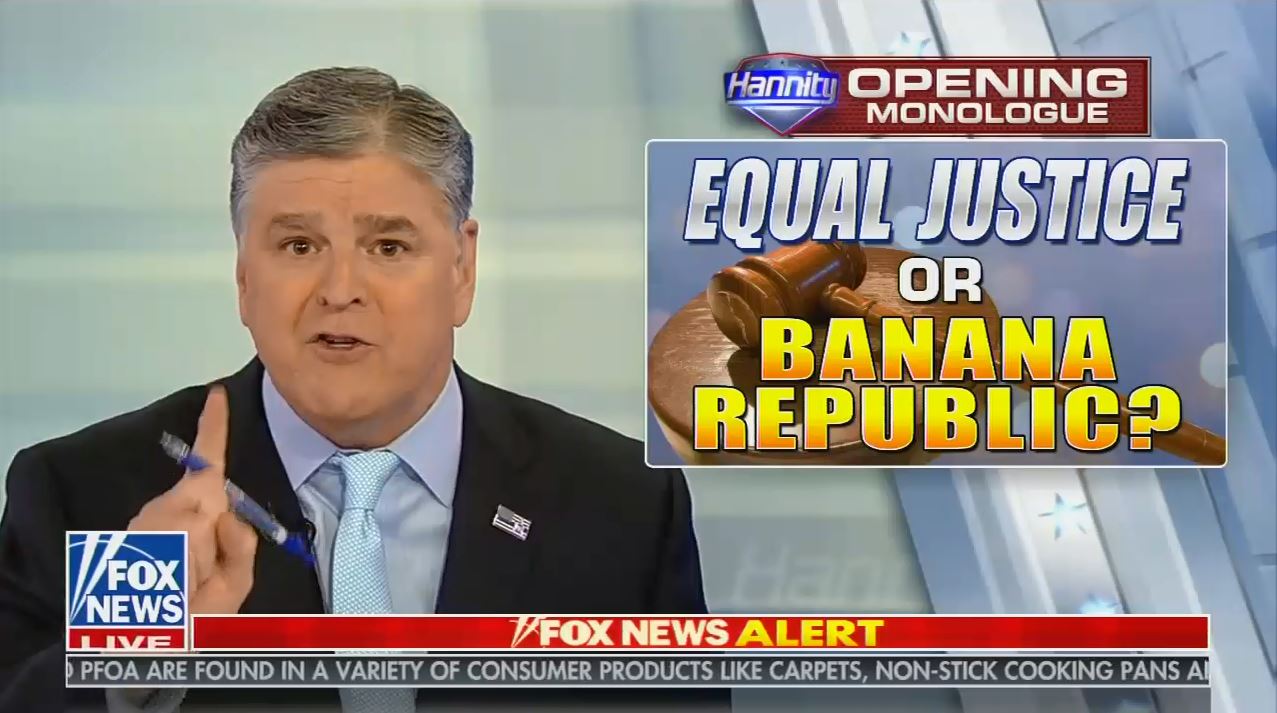 Fox’s defenders view such criticism as unfounded and politically biased. Ken LaCorte, who was in senior management at Fox News for nearly 20 years, until 2016, and recently started his own news service, told me, “The people at Fox said the same thing about the press and Obama.” Fox’s public-relations department offers numerous examples of its reporters and talk-show hosts challenging the Administration. Chris Wallace, a tough-minded and ecumenical interviewer, recently grilled Stephen Miller, a senior Trump adviser, on the need for a border wall, given that virtually all drugs seized at the border are discovered at checkpoints. Trump is not the first President to have a favorite media organization; James Madison and Andrew Jackson were each boosted by partisan newspapers. But many people who have watched and worked with Fox over the years, including some leading conservatives, regard Fox’s deepening Trump orthodoxy with alarm. Bill Kristol, who was a paid contributor to Fox News until 2012 and is a prominent Never Trumper, said of the network, “It’s changed. Before, it was conservative, but it wasn’t crazy. Now it’s just propaganda.” Joe Peyronnin, a professor of journalism at N.Y.U., was an early president of Fox News, in the mid-nineties. “I’ve never seen anything like it before,” he says of Fox. “It’s as if the President had his own press organization.”

Nothing has formalized the partnership between Fox and Trump more than the appointment, in July, 2018, of Bill Shine, the former co-president of Fox News, as director of communications and deputy chief of staff at the White House. Kristol says of Shine, “When I first met him, he was producing Hannity’s show at Fox, and the two were incredibly close.” Both come from white working-class families on Long Island, and they are godfathers to each other’s children, who refer to them as “Uncle Bill” and “Uncle Sean.” Another former colleague says, “They spend their vacations together.” A third recalls, “I was rarely in Shine’s office when Sean didn’t call.”

“Shine led Fox News’ programming division for a dozen years, overseeing the morning and evening opinion shows, which collectively get the biggest ratings and define the network’s conservative brand. Straight news wasn’t within his purview. In July, 2016, Roger Ailes, the co-founder and C.E.O. of Fox, was fired in the face of numerous allegations of chronic sexual harassment, and Shine became co-president. But within a year he, too, had been forced out, amid a second wave of sexual-harassment allegations, some of them against Fox’s biggest star at the time, Bill O’Reilly. Shine wasn’t personally accused of sexual harassment, but several lawsuits named him as complicit in a workplace culture of coverups, payoffs, and victim intimidation.”

Shine, who has denied any wrongdoing, has kept a low profile at the White House.” But Kristol contends that Shine’s White House appointment is a scandal. “It’s been wildly under-covered,” he said. “It’s astounding that Shine—the guy who covered up Ailes’s horrible behavior—is the deputy chief of staff!”

“The Washington Post columnist Jennifer Rubin, another conservative Never Trumper, used to appear on the network, but wouldn’t do so now. “Fox was begun as a good-faith effort to counter bias, but it’s morphed into something that is not even news,” she says. “It’s simply a mouthpiece for the President, repeating what the President says, no matter how false or contradictory.” The feedback loop is so strong, she notes, that Trump “will even pick up an error made by Fox,” as when he promoted on Twitter a bogus Fox story claiming that South Africa was “seizing land from white farmers.” Rubin told me, “It’s funny that Bill Shine went over to the White House. He could have stayed in his old job. The only difference is payroll.” 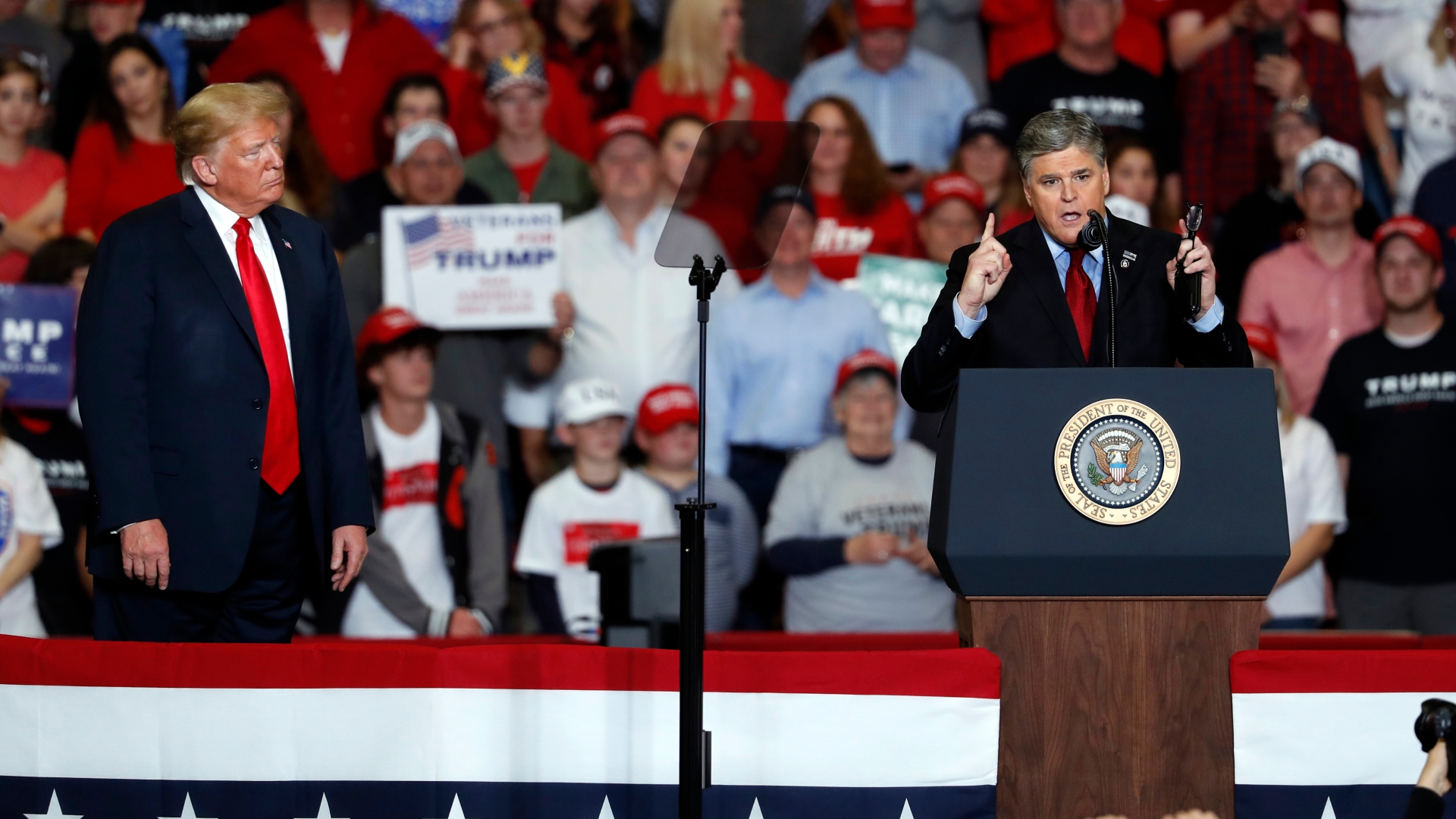 “With Shine, the Fox and White House payrolls actually do overlap. The Hollywood Reporter obtained financial-disclosure forms revealing that Fox has been paying Shine millions of dollars since he joined the Administration. Last year, he collected the first half of a seven-million-dollar bonus that he was owed after resigning from Fox; this year, he’ll collect the remainder. That sum is in addition to an $8.4-million severance payment that he received upon leaving the network. In December, 4 Democratic senators sent a letter to the White House counsel’s office, demanding proof that Fox’s payments to Shine don’t violate federal ethics and conflict-of-interest statutes.”

“Shine is only the most recent Fox News alumnus to join the Trump Administration. Among others, Trump appointed the former Fox contributor Ben Carson to be his Secretary of Housing and Urban Development, the former Fox commentator John Bolton to be his national-security adviser, and the former Fox commentator K. T. McFarland to be his deputy national-security adviser. (McFarland resigned after four months.) Trump recently picked the former Fox News anchor Heather Nauert to be the Ambassador to the United Nations, but she soon withdrew herself from consideration, reportedly because her nanny, an immigrant, lacked a work permit. The White House door swings both ways: Hope Hicks, Shine’s predecessor in the communications job, is now the top public-relations officer at 21st Century Fox. Several others who have left the Trump White House, including Sebastian Gorka, a former adviser on national security, regularly appear on Fox. Gorka recently insisted, on Fox Business, that one of Trump’s biggest setbacks—retreating from the shutdown without securing border-wall funds—was actually a “masterstroke.”

Link to entire report: The Making of the Fox News White House