WTF Is The New Green Deal And What’s All The Fuss About?/ Part I

Anyone who keeps up with the political news has heard about the Democratic Party NY freshman Rep. Alexandra Ortisio-Cortez (AOC) and the New Green Deal (GND), an ambitious plan in outline form that has been crafted to aggressively address the existential threat to our world as we know it, climate change.

The news coverage on the New Green Deal has been confusing and all over the map. The behind the scenes political turf battles about this idea of the GND has been off the charts. But the New Green Deal concept is NOT new. Thomas L. Friedman was writing about the need for this all encompassing climate change plan in 2007, in his book Hot, Flat, and Crowded VOX reporters delved into the historical weeds about how this GND came to be. The writers do cover related topics like the role it’s playing in current politics, the effort to back it up with a real policy program, and the many, many challenges facing it before it can become legislation.

This post will provide mostly a historical analysis on how the GND came into being.

What’s surprising is that the GND is more popular than all the naysayers would have you believe.

As per a February 2019, HuffPost report, “Mandates requiring the country to generate 100 percent of its electricity from renewables by 2050 enjoyed sweeping support. The question noted that Democrats believed such a policy would “kickstart the renewable energy sector, creating jobs for many Americans and ensuring that America leads the world in green technology,” while Republicans said, “this would take away freedom from American consumers, put people out of work, and raise prices for everything from transportation to consumer goods.”

“Update, 2/23/2019: Sen. Ed Markey (D-MA) and Rep. Alexandria Ocasio-Cortez (D-NY) introduced a Green New Deal resolution on February 7 that lays out the goals, aspirations, and specifics of the program in a more definitive way. Read about it here, and read about the criticism that followed here.” 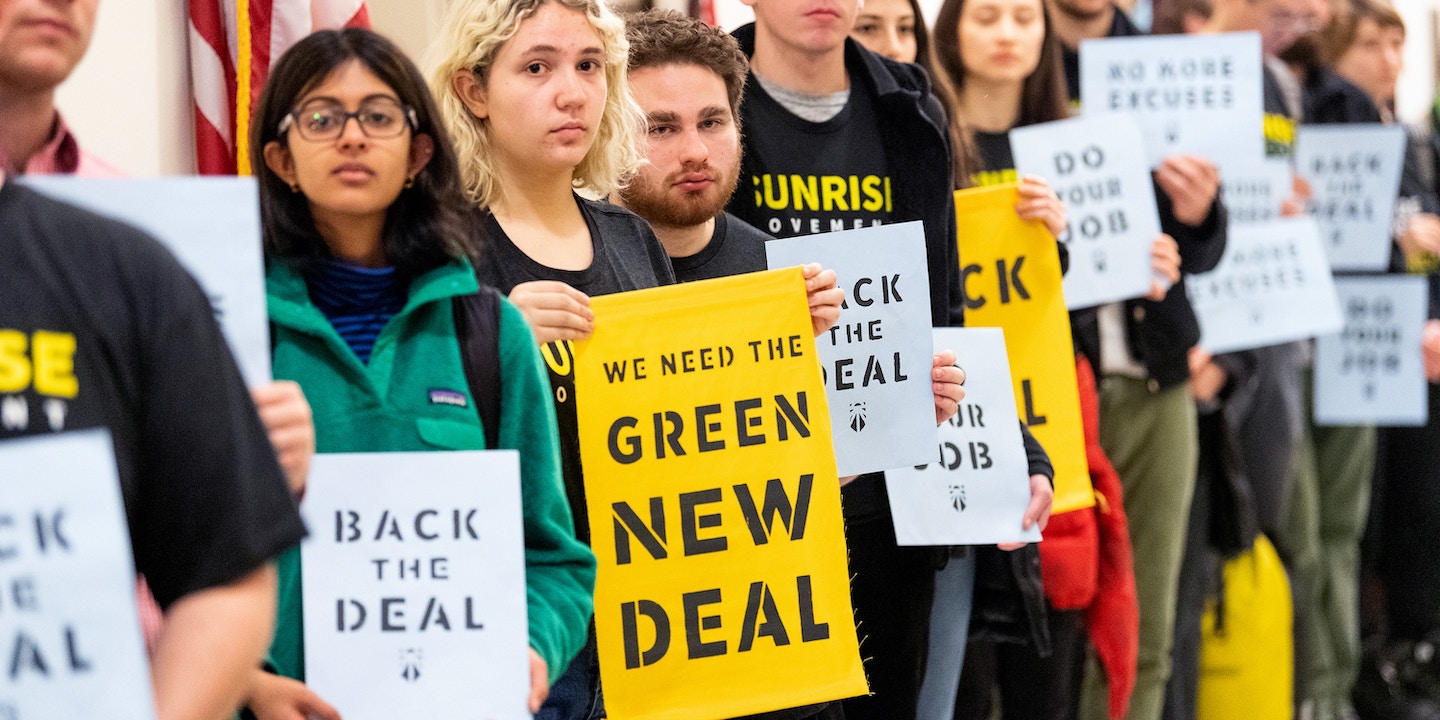 “As we will see, the exact details of the GND remain to be worked out, but the broad thrust is fairly simple. It refers, in the loosest sense, to a massive program of investments in clean-energy jobs and infrastructure, meant to transform not just the energy sector, but the entire economy. It is meant both to decarbonize the economy and to make it fairer and more just.”

“But the policy is only part of the picture. Just as striking are the politics, which seem to have tapped into an enormous, untapped demand for climate ambition.”

“When I think about the social status of the GND, I am struck by an analogy: It’s a bit like concentrated solar power. In a concentrated solar power plant, large arrays of mirrors reflect sunlight onto a single tower, heating the fluid inside it. The fluid transfers heat to water, the steam from the boiling fluid drives a turbine, and the turbine generates electrical power.”

“The GND is the tower, and all the sudden, all the mirrors are aligned, focused on it. The heat is building, the water is rapidly reaching a boil. Meanwhile, its owners are racing to build a turbine.”

“There is immense potential energy in the GND, a concentration of social attention and intensity. But converting that heat to power — to real results on the ground — will involve a great deal of political and policy engineering, almost all of which lies ahead.”

“The GND has great potential, but then, American political history is a long story of wasted potential, of waves of progressive enthusiasm breaking on the rocky shores of Washington, DC, to no lasting effect.”

“Before jumping in, it’s worth noting that a number of great journalists have blazed the trail on this story already. See, in particular: Kate Aronoff’s work, here and here but especially, for the big picture, here; Hannah Northey and the crew at E&E are all over the daily developments; Alexander Kaufman at Huffington Post keeps track of the politics; and Rob Meyer at the Atlantic always has good thoughts. (There are no doubt many others I’m forgetting.)” The GND concept is not new

“The first use of the term “GND” in the US may trace to New York Times columnist Thomas Friedman, who called for one in a 2007 column (and in his book Hot, Flat, and Crowded) as a kind of green globalism. (Funny thing, politics.) As Kaufman notes in a story on this history, none other than Barack Obama was taken by Friedman’s idea and included a GND in his 2008 platform. (It can also be argued that Obama’s stimulus bill was a proto-GND in itself.)”

“Around the same time, in 2007, British economist Richard Murphy began discussing a GND and founded the Green New Deal Group, which funneled some ideas to the Labour Party. The UN also took up the idea, calling for a global GND in 2009.”

“But then Tories won in the UK in 2009, the Republicans swept the 2010 midterms, and the idea mostly went quiescent, at least among politicians.”

“In 2016, a GND has been part of the US Green Party’s platform for over a decade. (It is also central to the platform of the European Greens — see this study from the Wuppertal Institute.)”

“Bernie Sanders’s 2016 campaign included a GND. And then, in the 2018 midterms, Alexandria Ocasio-Cortez, now a representative-elect, took it up.”

“But that capsule history of the term itself, the brand, somewhat sells short the intellectual lineage. Many pieces of the GND have been worked on by many people over the years. The constituent ideas — 100 percent clean energy; a just transition to a new, better economy; massive public sector investments — are not new.”

“Talk of a “blue-green alliance” between labor and environmentalists, built around public infrastructure investments and new jobs, goes all the way back to 2000 presidential candidate Ralph Nader; real work has been underway at least since 2006, when the, er, Blue-Green Alliance was established. The AFL-CIO has its own big infrastructure plan.”

“Van Jones wrote a book about green jobs back in 2008 and even worked briefly as an Obama green jobs adviser, before a right-wing smear campaign drove him from the administration. The whole green-economy frame almost took root, but once the Dems went on the defensive in 2010, it faded to the background.”

“In Washington state this year, activists ran a ballot initiative that coupled a carbon tax with a GND-style program of investments, but, in the face of $30 million of oil money, it went down to defeat.”

“Nonetheless, the basic GND ideas have persisted. And their appeal only grew as climate warnings became more dire. They were in the collective water, like an oversaturated solution, just waiting for a particle around which to crystallize.”

“That particle came in November.”

The GND comes to Washington

“After the 2016 race, some of the folks who worked on the Sanders campaign started an organization called Brand New Congress, with the audacious (some might say insane) goal of recruiting 400 fresh new faces to run for, and take over, Congress. Part of the shared platform was an ambitious, WWII-style mobilization on climate change (though not yet branded GND).”

That effort did not result in a congressional takeover, but it was not without fruits. Brand New Congress spun off a group called Justice Democrats that went on to recruit several winning candidates like Rashida Tlaib, Ilhan Omar, and Ayanna Pressley.

“Among them was Ocasio-Cortez, the young bartender who ran against incumbent centrist Democrat Joe Crowley in the New York’s 14th District primary. The co-founder of Brand New Congress, Saikat Chakrabarti, became Ocasio-Cortez’s co-campaign manager. (As of January, he will be her chief of staff.) And Ocasio-Cortez, who was already committed to putting climate change at the top of her agenda, eagerly embraced the green mobilization plan and began using the GND branding.”

“Then came the first week of orientation for new members of Congress.”

“Then a piece in the Hill reported that House Democrats had no plans to move on climate change, which appeared nowhere in theirlist of priorities. Meanwhile, House Minority Leader Nancy Pelosi started talking the day after the election about a “bipartisan marketplace of ideas,” which is not exactly what you’d call reading the room.” 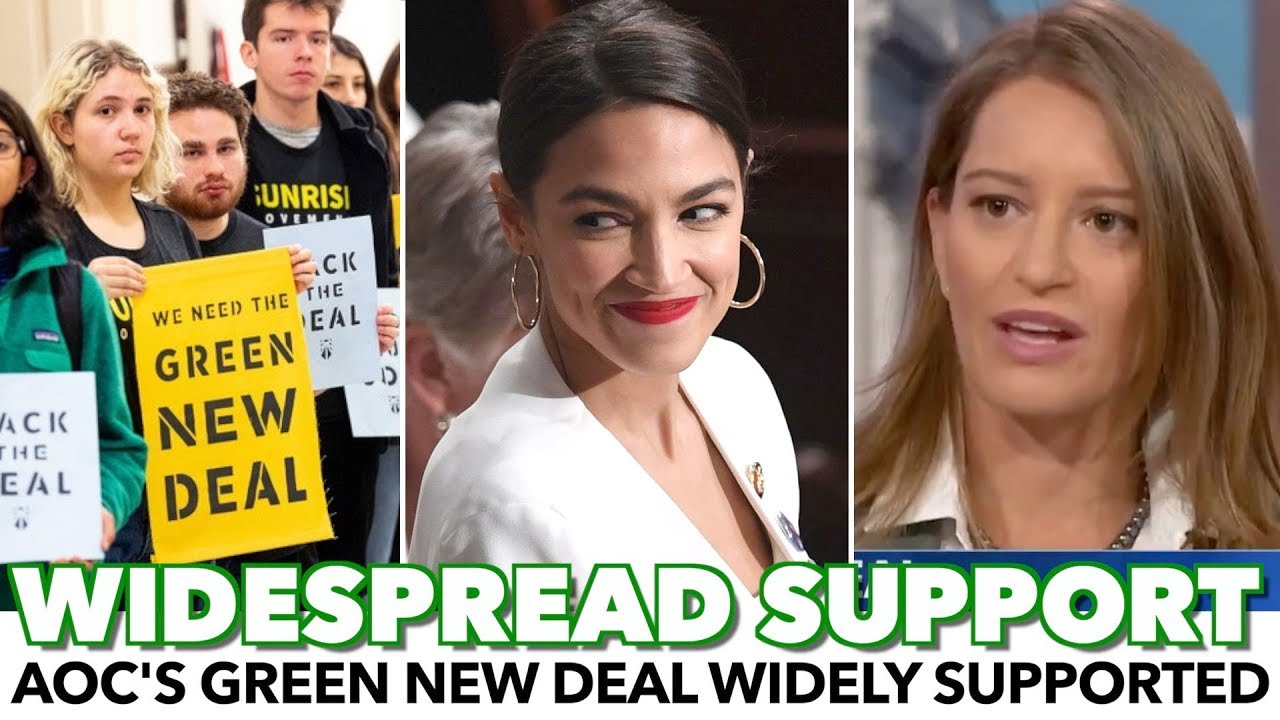 “Pelosi signaled that she planned to revive the Select Committee on Energy Independence and Global Warming (2007 to 2011, RIP), but activists and the incoming class of social democrats wanted something much bolder.”

“They didn’t see any point in pursuing cooperation with Republicans, a strategy that has proven fruitless for a decade. And they didn’t want climate policy tucked away in a committee that would do nothing.”

“But it gave them something to ask for. They couldn’t very well demand the full GND before the new Congress was even sworn in. But they could ask for a commitment.” 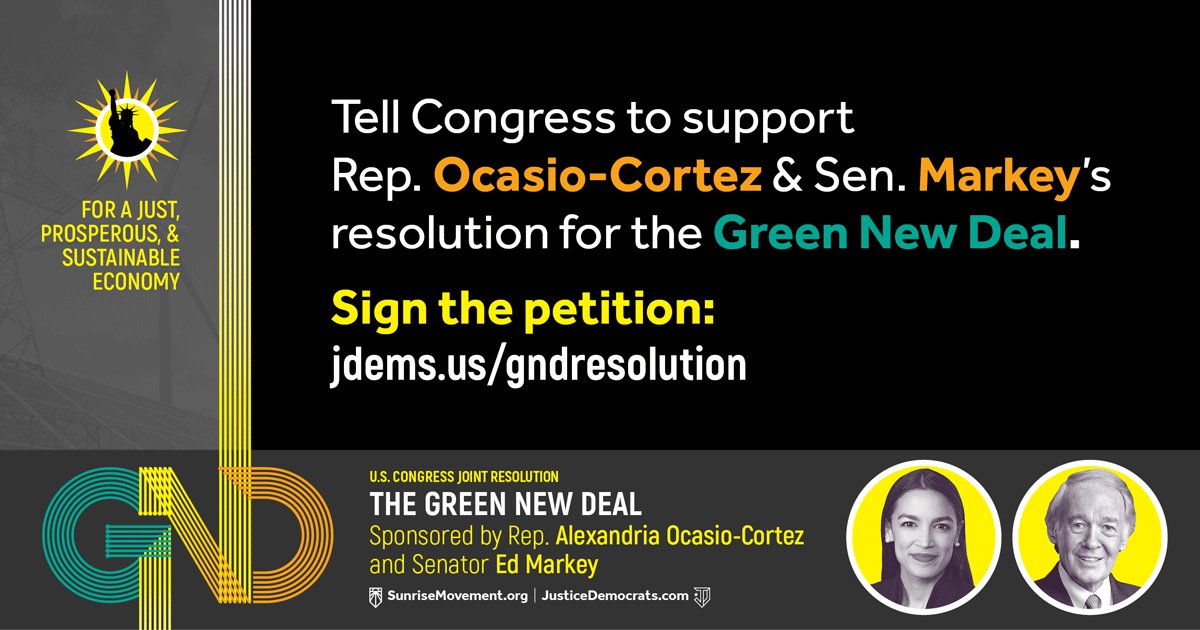 “So the Sunrise Movement, a youth-led organization organizing around a GND, planned a sit-in in Pelosi’s office, to demand a committee with teeth — a committee that would be charged with actually developing a plan to meet the ambitious targets implied by the IPCC report.”

“Sunrise approached Ocasio-Cortez to ask if she might help publicize the event, perhaps with a tweet. Instead, she vowed to show up.”

“Working together, Sunrise, Ocasio-Cortez, and the Justice Democrats quickly hashed out a proposal for a Select Committee on a Green New Deal, outlining their vision for the kind of plan such a committee would produce.” 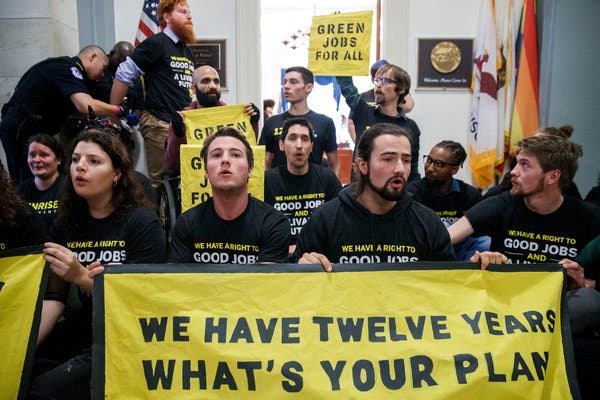 “In retrospect, though it came together on the fly, the timing was fortuitous. The elections were over; there was no presidential election yet; Trump hadn’t tweeted in a few whole minutes; the political press was bored. The IPCC had put climate change in the news. And the prospect of a young, newly elected, not-yet-sworn-in progressive representative leading a youth protest against her leader-to-be proved irresistible.

In the ensuing weeks, Ocasio-Cortez and Sunrise pushed incoming members of Congress to sign on to the GND Select Committee plan. On December 10, there was another sit-in in Pelosi’s office, this time with activists stretched out the door. By the end, 40 members of Congress — including several notable senators like Booker, Sanders, and Jeff Merkley, each a potential 2020 presidential candidate — signed on to support the committee. 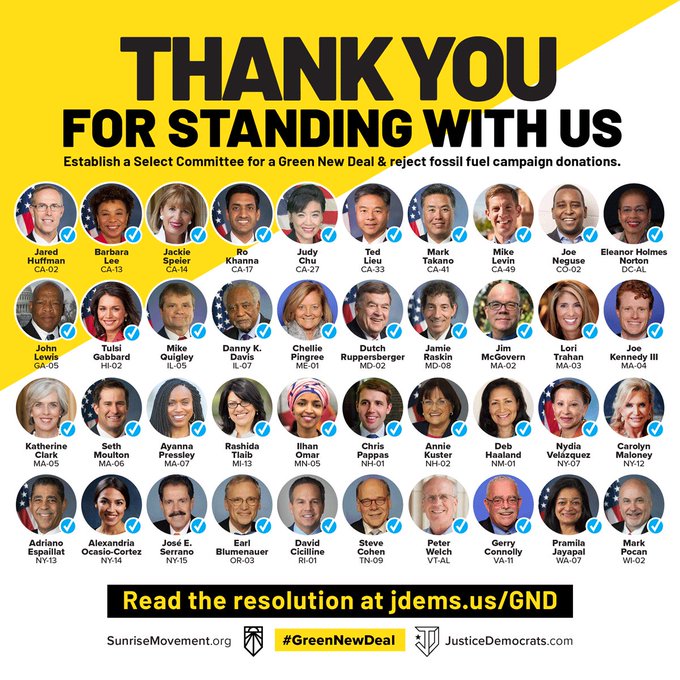 40 Representatives now back the Select Committee for a #GreenNewDeal — one of the most ambitious economic and climate policies ever discussed in Congress.

Our organizing is working. We’re changing politics in America.

It was an activist campaign building momentum for serious climate action, and it was making headlines.
Can anyone guess, why GOP members who are climate change deniers, have been orchestrating a full press court attack on Rep. Alexandria Ocasio Cortez?