Let’s Be Clear, Sen. Gillibrand Will Never Win My Support For Her Treatment Of Sen. Al Franken

Around December 2017, when the #Me,Too movement was in full force the Democratic Party’s NY US Senator Kirsten Gillibrand was the first senator to speak out against the then Senator Al Franken. She led the charge to push for his resignation after multiple women had accused him of sexual misconduct because of her desire for -0- tolerance for any and all sexual inappropriateness. By her actions, she forced her colleagues’ hands in a deft public maneuver that made it hard for them not to go along with her.

Sen. Al Franken had been blind sighted, claimed he didn’t remember a lot of what was being alleged and when he did recall things, his memory of what happened was very different. But he apologized for any of his actions having caused anyone pain and discomfort. He had volunteered to  fully cooperate with a thorough ethics investigation, as he asked for due process. But the noise was so loud and mob like that he decided to resign to spare the Democratic Party from being harmed. He had already been damaged. 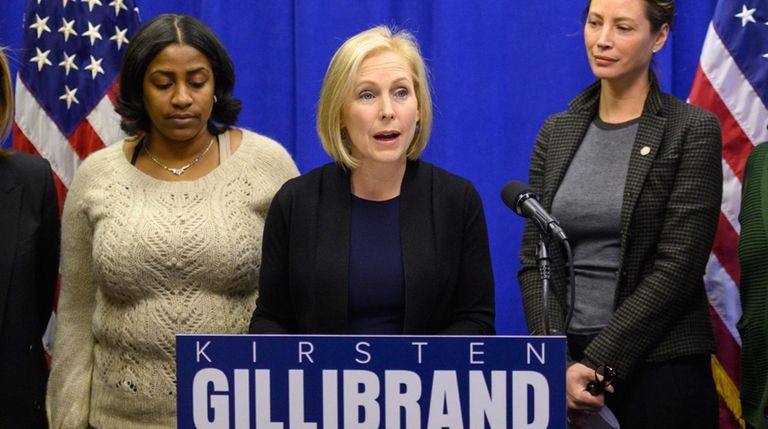 I argue that there needs to be a conversation about what the consequences should be in each individual case involving claims of sexual inappropriate behaviors in the workplace with a sense towards proportionality. The standard should be to start with an ethics review for all those accused, before one’s resignation is demanded. Just as in any business environment, the offending party could face consequences from being given a warning to cease and desist from certain behaviors to being out-rightly fired, subsequent to an investigative process.

These standards on how to deal with these cases might have helped Senator Gillibrand’s handling of her own office’s #Me,Too case regarding one of her staffers. In short, the staffer who filed a sexual harassment complaint against the senator’s aide Abbas Malik, resigned because she felt that her assertions had not been given serious consideration. Mr. Malik was forced to resign only after there was proof provided about other similar allegations.

Senator Gillibrand has been feeling the blow-back from all this history from Democratic Party voters and donors after she announced her bid to run to be its presidential candidate for 2020.

To defend her actions, this is what Senator Gillibrand has been saying: “The truth is we miss him and people loved him, but he had 8 credible allegations against him of sexual harassment for groping, two of them since he was a senator, and the eighth one was a congressional staffer. And I had a choice to make whether to stay silent or not, whether to say, ‘That’s not okay with me,’ and I decided to say that.”

It’s my opinion that not all the claims were credible. The initial complaint involved a controversial photo which I’m convinced was a set up, as described below. Four where anonymous. The four had this right to remain anonymous, but for Senator Gillibrand to push forward aggressively for Senator Al Franken’s head on a platter without allowing him the most basic due process procedure, smells of crass politics. In short, there were options that she could have taken between remaining silent and pushing for the death sentence.

The photo that did in Sen. Al Franken…

Here are the reasons I have doubts about that photo taken during a 2006 USO tour where Mr. Franken is shown touching Ms. Lee Ann Tweeden’s breasts while she’s fully clothed but appears to be asleep.

1.) Al Franken’s brother who took the photo describes the context of what happened very differently from Ms. Tweeden’s version.

2.)  She had been a frequent guest of “Hannity” on Fox News.

3.) Does this have a familiar ring? As per a 11/16 Daily Caller report, “Famed Republican political operative Roger Stone knew that a news anchor would accuse Democratic Minnesota Sen. Al Franken of sexual assault.”

“Let’s just say Sen. Franken’s time in the barrel is about to come,” Stone told The Daily Caller over text early Thursday morning, hours before Leeann Tweeden came out with her claims.”

“Stone, a longtime political adviser to President Trump, is known for his “dirty tricks.” He did not elaborate to The DC how he knew Tweeden was going to come out with her claims”.

4.) Ms. LeeAnn Tweedon had a history of being in provocative photos in order to garner added publicity.

I’m disappointed with my friend Leeann Tweedon. Her partner at KABC John Phillips is a Roger Stone pal & they coached her for weeks to bring Al Franken down. I’d hoped she’d use her voice to speak out for all women again predators like Roy Moore & Donald Trump but she’s a birther

On the 19th of March 2019, Senator Gillibrand tweeted out an explanation for her above described actions, followed by a request for monies, but the responses were brutal.

Here’s the tweet issued by Senator Gillibrand’s campaign and some of the responses dated March 19, 2019...

“I knew that calling on Al Franken to resign was a risk, but silence wasn’t an option. I’m running for president to fight for a country that values women, and I’m ready to share this vision with the American people. Will you give $1 to help us bring our vision to the debate stage?”

Paid for by Gillibrand 2020
***
@GrondaMorin22 minutes ago
Replying to @SenGillibrand

Doing the right thing was an option. Supporting an investigation like you did for your own employee was an option. Do you think Sen. Al Franken deserved any less? Remaining silent was not your only option. You won’t gain my support.

My God! Everytime I forget what it is about you that rubs me the wrong way, you remind me! Unless & until you ADMIT, ACCEPT & APOLOGIZE for your stupid mistake pushing #AlFranken out, YOU CAN FORGET ABOUT MY SUPPORT!

What an awful thing to use as a fund raiser. Al Franken asked for due process but playing politics was too important to you.

Getting rid of a rival was of utmost importance as well.

It was an opportunistic move on your part. You thought you could damage a rival and you did.

The allegations against senator Franken were NOT credible! You know he was set up and you keep using him to try to advance your political standing. You should be ashamed. I’d vote for @alfranken for president before I’d ever vote for you. #Franken2020

Amen. What was done to Franken was such a blatant sham

Ma’am, I’m not sure who your advisors are, but this message is not to your advantage. It’s an “in your face” to many who believe the former senator didn’t get his due process.

Cedarflame‏@Cedarflame16h16 hours ago
I agree it kind of pissed me off.

PamS‏@Pam54cfl17h17 hours ago
Replying to @SenGillibrand

I do not agree with you on Al Franken. You will not get my donation.

I’m a Dem from your state, but Nope. Al Franken was a deal-breaker.

jay‏@jbcaug1317h17 hours ago
Replying to @SenGillibrand

Ballsy enough to bring up the Al Franken situation. It was a calculated risk on your part that will most likely be your most prominent identifying feature in a huge field of Democratic contenders. I think it will be the one that kills your shot at the office

Shane‏@Sparky40318h18 hours ago
Replying to @SenGillibrand

Absolutely not — You should look into due process it’s a thing and you’re a sanctimonious bully. I can’t believe you’d fund raise on this — it was over-reach. @alfranken

How is it the right thing to do when there was no investigation? Resign for taking a funny picture? Resign because Roger Stone created a false narrative? A terrible decision on your part to lose one of our most powerful voices.

I totally agree and I don’t think she realizes how angry so many are about it.

Your campaign does nothing to dispel the strong suspicion many had that your actions were politically motivated. If this fund drive fails to pull in the revenue you hoped for, as I suspect it will, you can always put up for auction the knife you stuck in Sen. Franken’s back.

That is the reason I won’t support you in the primary. Nice way to rub my nose in it. You were wrong and it cost the Democratic Party a powerful voice. I would trade you to have Franken back any day.

Nope. Al Franken was a great senator. I cannot forgive you for that. He was a decent man who did care about women’s rights.

Geezer at large‏@geezeratlarge17h17 hours ago
Replying to @SenGillibrand

Hate to say it, but Al Franken will be in the first paragraph of your obituary.

Who are you trying to convince, other people or yourself? Please, girl. You threw him under the bus and you know it. Then ran over him a few extra times for good measure. You will get my vote when hell freezes over. The end.

Starshine‏@Rebecca3887195017h17 hours ago
Replying to @SenGillibrand

No, it was wrong. Thats what it was.

Well, that one thing you thought was the right thing, was a very wrong thing for many people. Not forgotten, not forgiven, zero chance of winning the primary

I think giving him his “day in court” so to speak, would have been the correct move.

This isnt going well‏@List_goddess17h17 hours ago
Replying to @SenGillibrand

Nope. Due process means something – apparently not to you though

this fundraising line feels a bit awkward. the number of negative replies is kind of shocking, and sooo many from democrat women voters! guess a lot of ppl, including myself, love/loved @alfranken enough to think he deserved due process. hope u fired whoever approved this ad.

Misspell‏@misspell17h17 hours ago
Replying to @SenGillibrand

@alfranken come back. We need you. Run for President.

Hell no. Your loud and clear call for him to resign was grandstanding and backfired. How about due process? How about letting voters decide? That “risk” will cost you dearly. We’ll never forget you were the lead in giving up a Dem senate seat.

How’s this working out for you? Not the way you thought it would, I bet. You’ll not get one red cent from me because of what you did to @alfranken. We needed his intelligence in the Senate and you cost us dearly.

You miscalculated. Thankfully, we have many other Dem choices.

Oh yeah, now I remember why I don’t like you.

I just figured out why I won’t be voting for her.

Stef‏@harkinsstef17h17 hours ago
Replying to @SenGillibrand

Nope. But thanks for playing.

It was reckless and showed your lack and patience and due diligence. So for this reason only you will not have my Minnesota support. You removed my voice in the senate.

jerZboyMediaUSA‏@jerZboyUSA17h17 hours ago
Replying to @SenGillibrand

So this is an UNSOLICITED ad placed on my timeline from Twitter.

No, that was poor judgment on Frankel. Will vote for you if you become Democratic candidate. But no support whatsoever until then.

Oh, & btw, you’re right; Sen. Franken COULD have “stuck it out” & gone thru the ethics process. But he was smart enough to realize that for the good of his PARTY, it was best he step aside. You see, he has INTEGRITY – something YOU clearly lack.

LibraryLady2‏@lbottge17h17 hours ago
Replying to @SenGillibrand

You will soon be a question in the 2020 edition of Trivial Pursuit….

Judy‏@MIJudy14h14 hours ago
Replying to @SenGillibrand

Not at this time. You said there were 8 credible accusations against Sen. Franken. Some were anonymous as I recall (can’t be verified as credible). One complained he put his hand on her waist while taking a picture. Really?

No. And quit using your kids as props.