I’ve been telling myself to take a deep breath and to be patient a bit longer. On the 22nd of March 2019, “We the People” have been told for sure, two key details. First, the FBI’s Special Counsel Robert Mueller III has delivered his final report to the US Department of Justice (DOJ), regarding his findings in pursuant of his assignment to investigate how extensively did Russia interfere with the US 2016 election’s infrastructure; and if Americans worked in concert with Russia to effect the outcome of the 2016 elections.

The second key point is that the public has been advised that report does not include any additional indictments.

As the head of the US Department of Justice,  the Attorney General William Barr then issued a letter to the leaders of the House and Senate Judiciary committees.

For right now, I’m refusing to participate in the speculation game, as to why additional indictments have not been forthcoming or what is or is not contained within this final report.

What we don’t know is when the report will be made available to the public minus redactions due to classified material, data still under investigation and the personal data of individuals like home addresses, phone numbers, social security numbers, etc.

Here’s a tweet by the US House Intelligence Committee Chairman Rep. Adam Schiff:

Mueller’s investigation began as a counterintelligence inquiry into whether individuals associated with the Trump campaign were compromised by a foreign power. By law, that evidence he uncovered must be shared with our Committee. And his report must also be made public. Now. 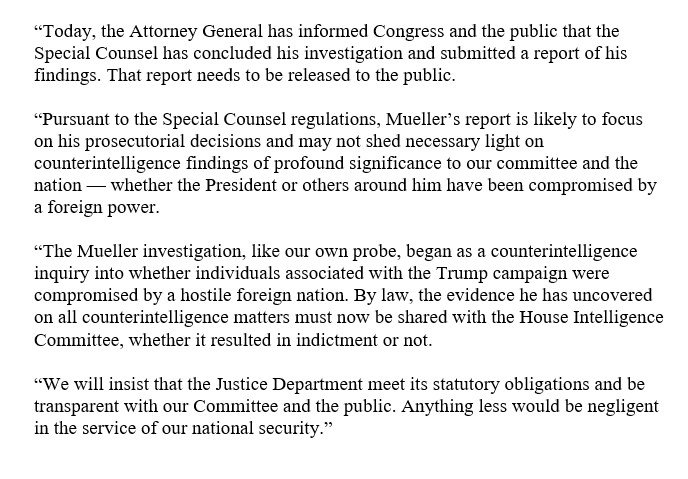 NYT: [Trump responds to the Times’s report on the FBI investigation via Twitter.] 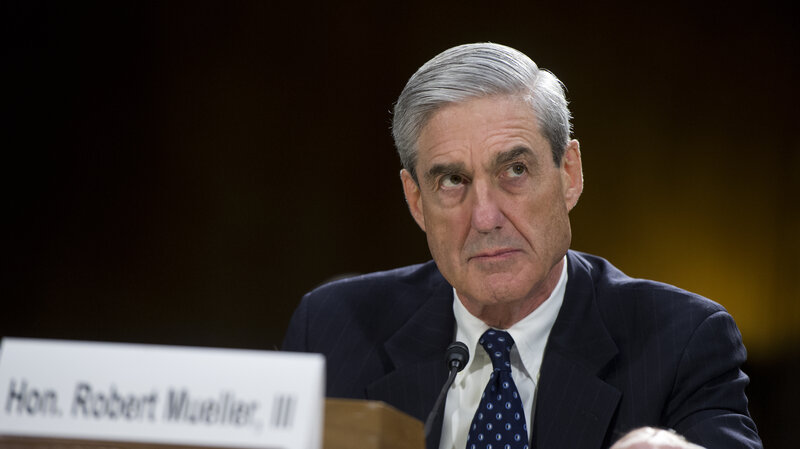 “Special counsel Robert S. Mueller III has submitted a confidential report to Attorney General William P. Barr, marking the end of his investigation into Russian interference in the 2016 election and possible obstruction of justice by President Trump, a Justice Department spokeswoman said.”

“The Justice Department notified Congress late Friday (3/22/2019) that it had received Mueller’s report but did not describe its contents. Barr is expected to summarize the findings for lawmakers in coming days.”

“In less than 2 years, Mueller’s investigation has led to criminal charges against more than 30 individuals. A senior Justice Department official said the special counsel hasn’t recommended any further indictments.”

“In a letter to the leaders of the House and Senate Judiciary committees, Barr wrote that Mueller “has concluded his investigation of Russian interference in the 2016 election and related matters.”

“The submission of Mueller’s report marks the culmination of his closely held inquiry, a case that has engulfed the Trump administration since its inception and led to multiple guilty pleas from former advisers to the president. With the closing of his investigation, Congress and the newly empowered Democratic House majority will soon assess his findings — and determine what steps to take.”

“Immediately after the news of Mueller’s report broke, Democrats demanded that its contents be made public.”

Barr wrote that Mueller submitted a report to him explaining his prosecution decisions. The attorney general told lawmakers he was “reviewing the report and anticipate that I may be in a position to advise you of the Special Counsel’s principal conclusions as soon as this weekend.”

“The attorney general wrote he would consult with Deputy Attorney General Rod J. Rosenstein and Mueller “to determine what other information from the report can be released to Congress and the public consistent with the law, including the Special Counsel regulations, and the Department’s long-standing practices and policies.”

“Barr said there were no instances in the course of the investigation in which any of Mueller’s decisions were vetoed by his superiors at the Justice Department.”

“I remain committed to as much transparency as possible, and I’ll keep you informed as to the status of my review,” Barr wrote.” 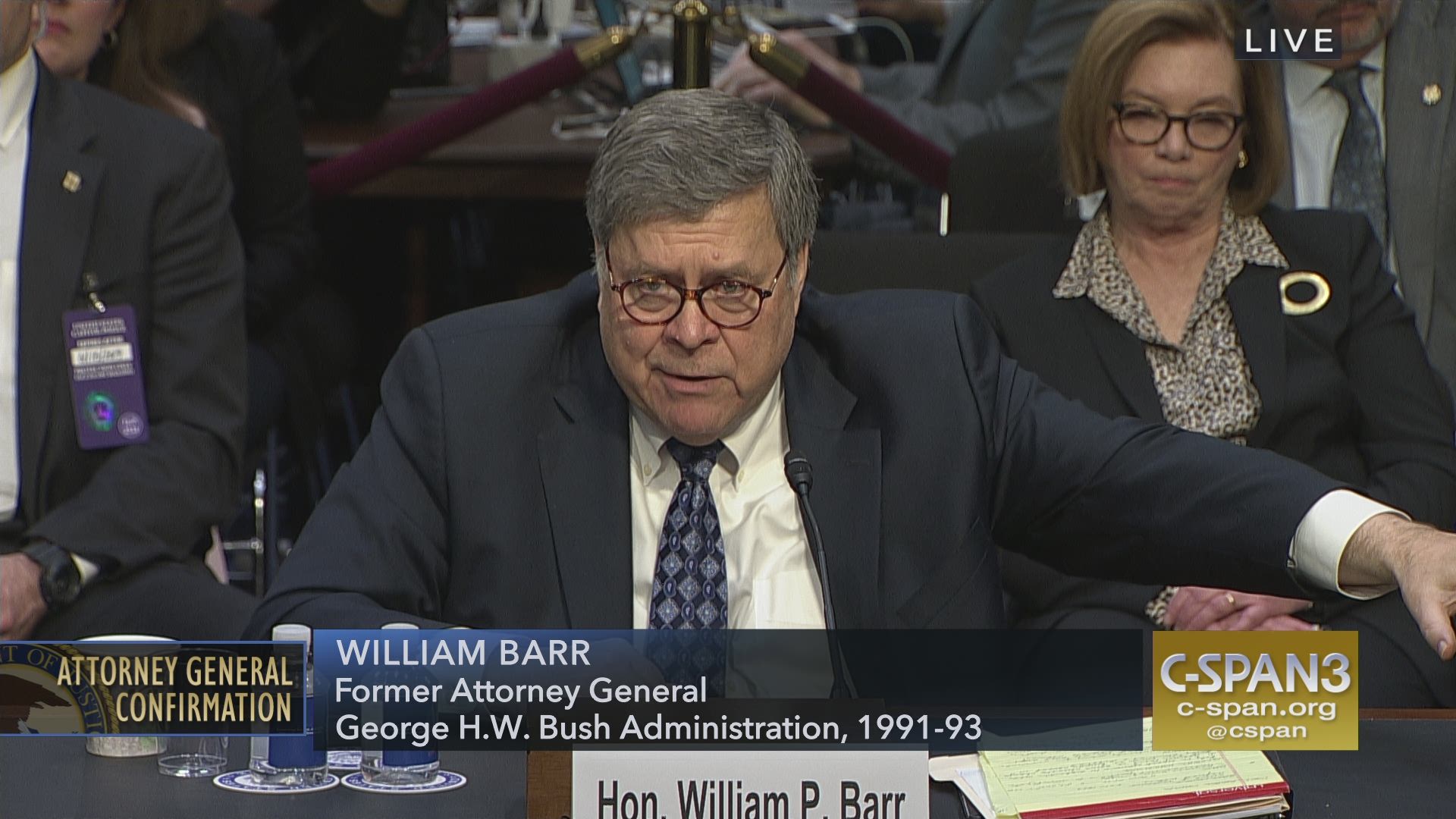 “After a week of growing expectation that Mueller’s long-awaited report would soon arrive, a security officer from Mueller’s office delivered it Friday afternoon to Rosenstein’s office at Justice Department headquarters, according to spokeswoman Kerri Kupec. Within minutes of that delivery, the report was transmitted upstairs to Barr.”

“Around 4:35, White House lawyer Emmet Flood was notified that the Justice Department had received the report. About a half-hour after that notification, a senior department official delivered Barr’s letter to the relevant House and Senate committees and senior congressional leaders, officials said.”

“One official described the report as “comprehensive,” but added that very few people have seen it.”

“Even with the report’s filing, Mueller is expected to retain his role as special counsel for a wind-down period, though it is unclear how long that may last. A small number of his staff will remain in the office to help shut down the operations.”

“The investigation is complete,” said Kupec.

“White House spokeswoman Sarah Sanders said the next steps “are up to Attorney General Barr, and we look forward to the process taking its course. The White House has not received or been briefed on the Special Counsel’s report.”

See:  lawfareblog.com/Very Quick Thoughts on the End of the Mueller Investigation