Just like the republican President Donald Trump, his cronies in the White House and the US Congress have been doing their level best to white wash the 3/22/2019 FBI’s Special Counsel Robert Mueller’s final report based on the FBI’s 22 month Trump-Russia probe with the mantra that it exonerates the president, they are working overtime to do reputation damage control on behalf of the former US House’s Intelligence Committee’s Chairman, Rep. Devin Nunes. They are experiencing little success on both fronts.

On 3/28/2019, the GOP members of the House Intel Committee failed in their recent attempted coup headed by Rep. Devin Nunes  to oust their current Democratic Party Chairman, Rep. Adam Schiff.

Every GOP lawmaker on the House Intelligence Committee called on its Chairman Adam Schiff to resign, as they accused him of pontificating on the obviously false narrative that President Trump was guilty of collusion (conspiracy) between him and Russia; and that he has been “undermining” the credibility of the panel.

At the start of the hearing, Republican Rep. Mike Conaway read a letter arguing  that Rep. Schiff has been “at the center of a well-orchestrated media campaign claiming, among other things, the Trump campaign colluded with the Russian government in its attack on the 2016 US election process with the intent to effect the outcome in President Trump’s favor.

Chairman Adam Schiff, who had been blindsided by this bold move from his GOP colleagues as he was about to address a witness, recovered his composure to respond in a forceful manner, listing all the questionable behaviors by the president with the commentary, that he did not define each of these infraction as being okay. He started talking about Donald Trump Jr.’s involvement in the Trump Tower meeting and former campaign chairman Paul Manafort’s sharing of polling data with a Russian associate and then he continued with his litany. 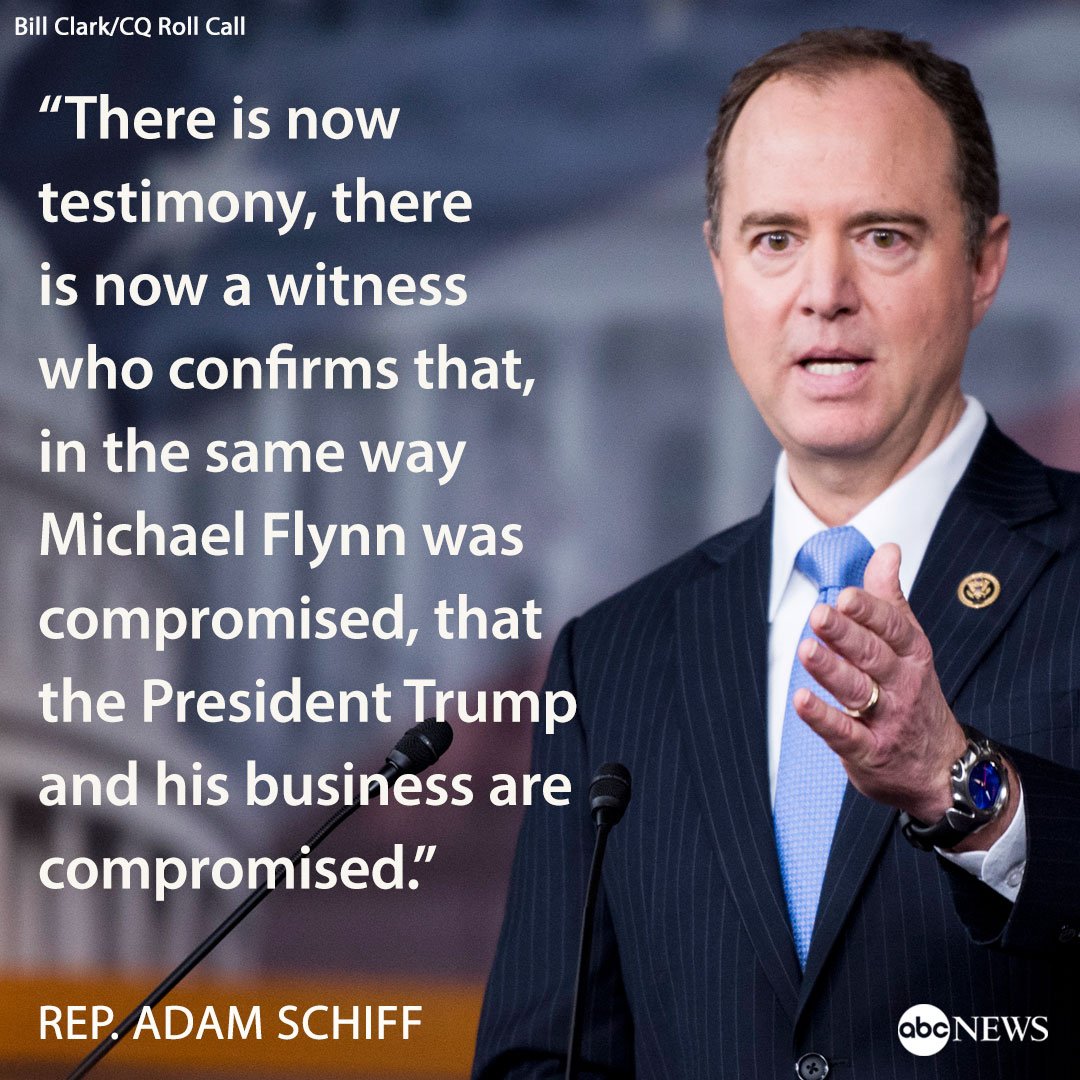 One of my favorite conservative columnist Max Boot has responded with the power of the pen to the GOP efforts to rehabilitate Rep. Nunes’ reputation.

On April 1, 2019 Max Boot for the Washington Post penned the following  opinion piece, Sorry, “Trump fans, but here on Planet Earth, Devin Nunes is no hero”

Devin Nunes was proven correct. That’s what the report says. We should praise him.”

“Congressman Adam Schiff, who spent two years knowingly and unlawfully lying and leaking, should be forced to resign from Congress!”

“We have reached peak stupidity since special counsel Robert S. Mueller III completed his investigation without recommending any criminal charges against President Trump or any additional criminal charges — beyond all of the indictments and convictions he has already secured — against Trump’s aides. Of course, Mueller couldn’t indict the president even if he wanted to. But the president and his amen chorus are using this as an opportunity to pillory Rep. Adam B. Schiff (D-Calif.), the chairman of the House Intelligence Committee, while praising his predecessor, Rep. Devin Nunes (R-Calif.), now the ranking minority member. It’s as if Inspector Clouseau were getting promoted while Lieutenant Columbo was getting fired.”

“The notion that Nunes is some kind of hero can be put to rest by reading the extensive file that the Moscow Project of the Center for American Progress has compiled on his dodgy doings. Nunes is an unscrupulous sycophant and unhinged partisan who is willing to say or do anything to protect the president.”

(See: Timeline From The Website: The Moscow Project Regarding President’s Russian Saga)

“As late as December 2016, Nunes claimed there was “no clear evidence” that the Russians had interfered in our election. Even the short summary of the Mueller report released by Attorney General William P. Barr confirms what was clear back then: that the Russians were behind the hacking of the Democratic National Committee. Nunes also denied that there had been any contacts between the Trump campaign and the Russians. “It’s all a dead trail that leads me to believe no contact, not even pizza-delivery-guy contact,” Nunes told The Post in February 2017. So far, 102 contacts between the Trump campaign and Russian representatives have been publicly revealed. But it’s true none of them involved Domino’s.”

“Rather than investigate Trump-Russia ties, Nunes used his perch at the House Intelligence Committee to promote crazy conspiracy theories designed to distract attention from the allegations against Trump. After Trump claimed that President Barack Obama had wiretapped him, Nunes announced in March 2017 that a “whistleblower” had told him that the Obama administration had unlawfully “unmasked” the names of Trump aides in surveillance transcripts. It turns out that his “whistleblower” was a trio of Trump aides and that there was no evidence of any illegal unmasking. Nunes was accused of improperly disclosing classified information and had to temporarily recuse himself from the Russia investigation.”

“Undeterred, Nunes resurrected bogus claims that Hillary Clinton had sold American uranium to Russia. He then claimed that the FBI had launched its investigation of Trump based on the Steele dossier paid for by Clinton’s campaign. In early 2018, he campaigned to publicly disclose a memorandum making the case, even though the FBI objected that it contained classified information. Nunes got the memo out, but it didn’t prove what he claimed. Turns out the FBI launched its investigation after a Trump foreign policy aide revealed that he knew about the Russian hacking before it became public.”

“Nunes went on to further discredit himself by making false claims that the FBI spied on Trump’s campaign and that the texts sent by FBI agent Peter Strzok and FBI lawyer Lisa Page were evidence of a vast conspiracy against Trump. “These people are really dirty,” Nunes fulminated against the FBI and the Justice Department. He even threatened to impeach Deputy Attorney General Rod J. Rosenstein.”

In April 2018, Nunes and the other committee Republicans put out a report claiming there was “no evidence that the Trump campaign colluded, coordinated, or conspired with the Russian government.” Nunes may think he’s now vindicated, but he’s wrong. All that Barr’s summary said was that Mueller couldn’t prove beyond a reasonable doubt that Trump and his aides engaged in a criminal conspiracy with Russia. That’s very different from claiming there was “no evidence” of “collusion.”

In fact, as Schiff has rightly and repeatedly said, there is copious evidence of collusion. While the Russians were helping to elect Trump, Trump was promoting their findings (“I love WikiLeaks”), encouraging them to hack Clinton, covering up their attacks, and expressing admiration for their dictator. “Schiff was eloquent last week in rebutting the GOP’s misrepresentation of Mueller’s findings after all the Republicans on the House Intelligence Committee disgraced themselves by calling for his resignation as chairman. He tweeted: “I say this to the President, and his defenders in Congress: You may think it’s okay how Trump and his associates interacted with Russians during the campaign. I don’t. I think it’s immoral. I think it’s unethical. I think it’s unpatriotic. And yes, I think it’s corrupt.”

“Schiff is smart, fearless and credible. He is no liar — unlike Trump, who has told more than 9,400 falsehoods in office. Schiff looks especially good compared with Nunes, a bumbling political hit man who can’t shoot straight. Nunes actually sued a fictional cow and is now bottom-fishing for $20 donations with the wacko boast that he “uncovered widespread corruption at the highest levels of the DOJ and FBI.”

“In the real world, Schiff is a serious legislator and Nunes is a laughingstock.”

Adam Schiff: An open letter to my Republican colleagues

Jonathan Capehart: What happened when ‘little pencil-necked Adam Schiff’ took an eraser to Trump and his enablers