The 116th Congress officially convened (in January 2019) with Democrats taking control of the House of Representatives for the first time in eight years.

The Democratic leadership is a diverse slate, representing the record number of women and minorities their new caucus brings to Capitol Hill — Nancy Pelosi is resuming her place as the first female House speaker in history, with four other top positions.

Here’s who you need to know in House leadership for (the Democratic Party) in the new Congress:

Pelosi made history as the first woman speaker ever when she took the gavel in 2007. Now, she retakes it again 12 years later, also making her the first speaker to reclaim the position in more than six decades.

The 79-year-old Hoyer also resumed the same post he had during Democrats’ last turn in the majority, moving up from serving as minority whip for the past eight years.

Pelosi and Hoyer have a had a long, sometimes testy, relationship. She hails from the legendary Maryland D’Alesandro political family, but that hasn’t always endeared the two to each other, though they’ve denied any friction in recent years. Pelosi first beat Hoyer for whip in 2001 and she backed a challenger to Hoyer for majority leader when Democrats last took control in 2006.

As The New York Times, recently wrote, the “Pelosi-Hoyer frenemies dynamic, long a subject of intrigue in the Capitol, is growing ever more complex” as they’re back in power together. But Hoyer has been a political survivor. He’s the longest-serving current Democrat in the House, first elected in 1981. Hoyer is also the only white male in the top ranks of Democratic leadership.

The 78-year-old Clyburn is the highest-ranking African-American lawmaker in Congress. He served as whip when Democrats had the majority from 2007 until 2011, and then served as assistant House Democratic leader while Democrats were in the minority — a post Pelosi created especially for him when Hoyer and Clyburn were competing against each other after the 2010 elections. When Democrats were last in the majority, Clyburn served as chairman of the House Democratic Caucus.

It wasn’t lost on many Democrats this year, though, that the trio at the top of the leadership ranks are all in their late seventies. And there’s a proposal Pelsoi has backed to change that, term-limiting the top three spots to bring change over the next few years.

Lujan was awarded this No. 4 post after leading the Democratic Congressional Campaign Committee for the past two cycles, resulting in a 40-seat gain in November and Democrats flipping control of the chamber. The position makes the 46-year-old the highest-ranking Latino in Congress, and part of a new generation of potential Democratic leaders once the top three leaders eventually step aside.

Jeffries narrowly defeated California Rep. Barbara Lee in caucus elections in November to claim the No. 5 leadership post. Some of Lee’s allies claimed sexism and ageism in the vote, and criticized Jeffries as too centrist. Still, the victory set up the 48-year-old New York lawmaker, once called “Brooklyn’s Barack Obama,” as a possible speaker of the House one day, which would make him the first black Speaker in history if that happens. And his addition means there’s another African-American in Democratic leadership.

Bustos has the tough task of protecting Democrats’ newfound majority, but she brings credentials to the table unlike the others atop leadership — she represents a somewhat rural Illinois district that Trump narrowly carried, not unlike many of the seats Democrats will have to defend in 2020. A political protege of Senate Minority Whip Dick Durbin, D-Ill., the centrist lawmaker even got four votes for speaker from incoming moderate Democratic freshmen.

Here are the House Democrats who support an impeachment inquiry and why, in alphabetical order. Nineteen have joined the call since former White House counsel Donald McGahn did not testify to Congress despite a subpoena. (Rep. Justin Amash (Mich.) is the lone GOP House member to also call for impeachment.) 6.) Rep. David N. Cicilline (R.I.): “If Donald McGahn does not testify [Tuesday], it will be time to begin an impeachment inquiry,” he tweeted May 20.

9.) Rep. Diana DeGette (Colo.): “The president’s actions are clearly beneath the high personal, ethical and legal standards our founders envisioned in the executive branch, and, as such, constitute a prima facie case to trigger an impeachment investigation,” she said in a statement on April 23.

11.) Rep. Veronica Escobar (Tex.): “I personally feel like we cannot tolerate this level of obstruction, that if we do, then we have lowered the bar to the point where any criminal can be president of the United States,” she tweeted May 21.

12.) Rep. Adriano Espaillat (N.Y.): He signed on to articles of impeachment against Trump in November 2017.

13.) Rep. Dwight Evans (Pa.): “The heavily redacted MuellerReport reveals and details repeated disturbing conduct by the president, & it shouldn’t go unnoticed — an impeachment vote would begin the process & allow House Judiciary to have broader investigative availability, which is certainly warranted!” he tweeted in April.

14.) Rep. Marcia L. Fudge (Ohio): She signed on to articles of impeachment against Trump in November 2017.

15.) Rep. Al Green (Tex.): Green is one of the first members of Congress to support impeaching Trump, well before the Mueller report was released.

16.) Rep. Alexandria Ocasio-Cortez (N.Y.): “I cannot see a reason for us to abdicate from our constitutionally mandated responsibility to investigate,” she tweeted April 18.

17.) Rep. Jared Huffman (Calif.): “I think it’s important to call out the impeachable offenses that are taking place and to convey to President Trump and the American people that no one is above the law,” he said in February, signing on to articles of impeachment against Trump. 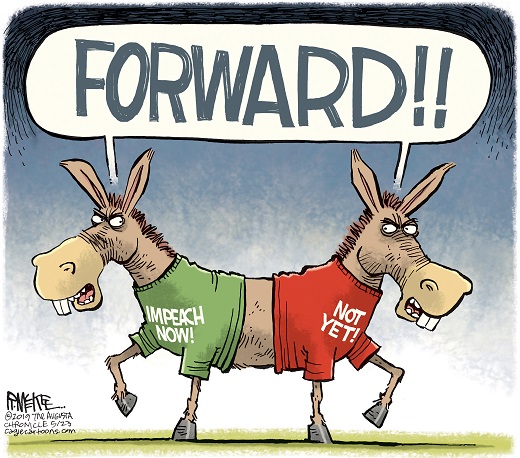 18.) Rep. Sheila Jackson Lee (Tex.): On 5/21/2019, she said she plans to introduce a resolution of investigation to determine whether the House should move forward with an impeachment inquiry.

19.) Rep. Pramila Jayapal (Wash.): “We are now at the point where we must begin an impeachment inquiry,” she tweeted May 21.

21.) Rep. Ted Lieu (Calif.): “This inquiry could lead to impeachment, or it could lead to nothing,” Lieu told The Washington Post on May 20.

22.) Rep. Tom Malinowski (N.J.): “I’ve come to think that it is warranted at this point,” Malinowski told NBC News in an article published May 21.

25.) Rep. Joe Neguse (Colo.): “The findings detailed in the Special Counsel’s report, and the Administration’s pattern of wholesale obstruction of Congress since the report’s release, make clear that it is time to open an impeachment inquiry,” he tweeted May 21.

26.) Rep. Ilhan Omar (Minn.): “We must begin impeachment proceedings and investigate if the president committed impeachable offenses,” she tweeted in April.

27.) Rep. Mark Pocan (Wis.): “Stonewalling Congress on witnesses and the unredacted Mueller report only enhances the President’s appearance of guilt, and as a result, he has pushed Congress to a point where we must start an impeachment inquiry,” he tweeted May 21.

28.) Rep. Ayanna Pressley (Mass.): “There’s a lack of moral fortitude and fitness to even be in this office,” she told Boston Public Radio in April.

29.) Rep. Jamie B. Raskin (Md.): “I do think the logic of an impeachment inquiry is pretty overwhelming at this point,” Raskin told The Post on May 21.

30.) Rep. Kathleen Rice (N.Y.): “Congress has a moral obligation to put our politics aside and take action. We need to start impeachment proceedings,” she tweeted May 21.

32.) Rep. Mary Gay Scanlon (Pa.): “Congress has patiently tried to work within traditional means to get to the bottom of this extraordinary situation. But, we have reached an inflection point,” she said in a May 21 statement.

33.) Rep. Brad Sherman (Calif.): “I am introducing Articles of Impeachment to begin a long process to protect our country from abuse of power, obstruction of justice, and impulsive, ignorant incompetence,” he said in a statement July 12, 2017.

37.) Rep. Norma J. Torres (Calif.): “Everyone should be concerned about preventing and obstructing the rule of law,” Torres told The Post in April.

38.) Rep. Juan Vargas (Calif.): He called for Trump’s impeachment after the release of the redacted Mueller report in April.

39.) Rep. Filemon Vela (Tex.): After the Mueller report was released, he signed on to Tlaib’s impeachment resolution as a co-sponsor.

40.) Rep. Maxine Waters (Calif.): The House Financial Services Committee chairwoman was one of the first members of Congress to call for impeaching Trump. “Mueller kicked the impeachment ball to the Congress. The Constitution gives the responsibility to Congress to impeach an unfit president.’ What more do we need?” she tweeted in April.\

41.) Rep. John Yarmuth (Ky.): He was among the 6 House Democrats who introduced articles of impeachment against Trump in November 2017.

The number is up to 69 of House Democrats who approve commencement of impeachment inquiry.