If Dems Grant House Speaker Pelosi Benefit Of The Doubt, What’s She Really Up To With -I-Word

I like many others have been pondering the question as to why on earth, is the Democratic Party US House Speaker Nancy Pelosi doing everything possible within her power to have the House avoid the commencement of an impeachment inquiry against the republican President Donald Trump to hold him accountable for all his lawless behaviors, which is a power specifically granted to the House by the US Constitution. His penchant for criminal schemes is well documented in the FBI’s 3/22/2019 final report of its 22 months long Trump-Russia probe, led by the Special Counsel Robert Mueller III; and by his own recent slips of the tongue, like his announcing to the world, that he’d be willing to accept assistance from foreign governments to help him win an election.

Based on the FBI’s Mueller report, on 6/7/2019, over 1000 federal prosecutors on a bi-partisan basis, signed a public declaration announcing, that if Donald Trump weren’t president, he would’ve been criminally indicted. There’s s Department of Justice rule that bars a sitting president from being criminally indicted.
****
See: Washington Post report: Trump would have been charged  with obstruction were he not President...
****

The US Constitution was originally drafted with the core purpose to prevent tyranny. Our forefathers didn’t want this country ever again, to be under the thumb of another king. That’s why our US Constitutional framers came up with the idea of distributing power among three branches, the president, the legislative body (the US Congress), and the judiciary/ the courts.

These framers also put in a mechanism within the US Constitution to be a check against an authoritarian president who would attempt to usurp the powers of the other branches of government. Article I, Section 2 gives the House of Representatives the “sole power over the impeachment” process. Article I, Section 3 gives the Senate the “sole power to conduct a trial regarding all impeachments.”

There’s the obvious political calculations where Speaker Pelosi has figured out that those House Democrats from Trump-leaning states could lose enough seats in 2020, where the Democrats would give up its current majority position, and then of course, she would lose her leadership role.

In 2018, there were 46 seats that changed party hands, both open seats and those occupied by an incumbent, and 30 of the 372 incumbent U.S. representatives (8.1 percent) lost their seats in the general election—all Republicans. These are the Congressional democrats who would feel shaky/ vulnerable if Speaker Pelosi gave the okay for the House to start an impeachment inquiry. In total about 26 would be truly vulnerable in 2020.

Another far out theory, could be that Speaker Pelosi is delaying the House’s initiation of the formality of an impeachment inquiry because according to her anti-impeachment ally, the House’s Intel Committee chairman Rep. Adam Schiff, President Trump has been under investigation by the FBI’s counter-intelligence division or by one of the other US intelligence agencies, where a delay is deemed to be beneficial, so the president won’t have his guard up as to what’s happening.

Another possibility could be that the House Speaker Pelosi is following the advice of Paul C. Light,  a Brookings Institution senior fellow in governance and a New York University public service professor who’s delivered lectures and a paper on how the House should investigate President Trump’s wrongdoings.

As per the 3/12/2019 Washington Post report by Joe Davidson, Paul C. Light offers a road map with 10 signposts on how legislators can increase the odds of conducting quality investigations with impact which doesn’t include impeachment, including these:

Length: “The House is currently preparing for a fast start in 2019 — speed is of the essence for establishing the chamber’s reputation as an investigatory juggernaut, but the press for immediate conclusions may lead to narrower probes and less depth.”

Bipartisanship: “Needs no explanation, but don’t expect any.”

Breadth: “Likely to be an early victim of the Democratic demand for results.” 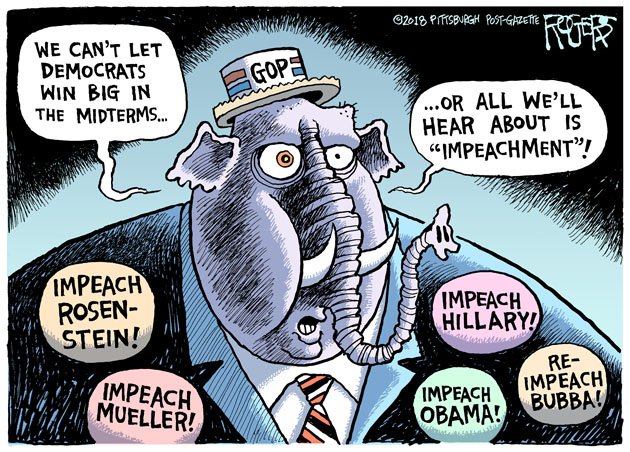 Thoroughness: “The good investigation establishes cause and effect after a deep analysis of the evidence. … Speed is likely to take its toll on investigatory thoroughness.”

Freedom to investigate: “The good investigation is free to investigate every lead and examine any angle without interference from its sponsors, stakeholders, and party leaders.”

Visibility: “The major challenge facing House Democrats in coming weeks is not too little visibility, but too much as committees and subcommittees compete for attention in a turbulent environment. Absent careful priority setting from the Democratic leadership, the packed investigatory agenda may create more heat than light.”

Durability: “The good investigation produces a set of facts and recommendations that exert influence into the future while establishing benchmarks for future oversight.” 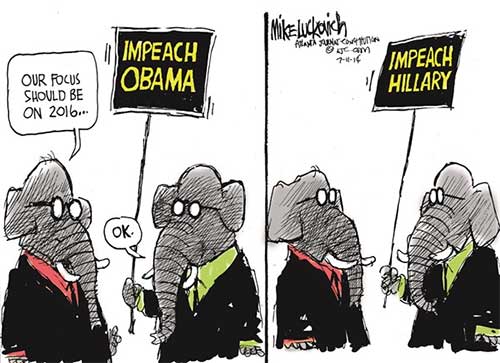 See: Paul C. Light’s new paper: How the House should investigate the Trump ...

Finally, there’s my fantasy of what I wish the House Speaker Nancy Pelosi was accomplishing with her delay/ avoidance of the US House commencing an impeachment inquiry. Let’s say she’s figured out that because of the voluminous amount of alleged misconduct by President Trump and his administration that an impeachment inquiry would last at least one year. This means that if she’s forced to cave into the demand for the House to begin a formal impeachment inquiry because of all the delays in gathering evidence due to the White House’s obstructionist measures, she’d want to time its start towards the end of September 2019.

Right now, it appears that President Trump is framing whatever the Democrats do, to favor himself, like playing the victim card. This is a truism whether or not the House commences the formality of an impeachment inquiry.

Speaker Pelosi needs to grab back the media megaphone, and she does that by making the courageous move of ordering the House to initiate the impeachment inquiry against President Trump. This will help the House members to highlight all of their other legislative work while the media spotlight is fixed on them because of the impeachment proceedings..

“The enthusiastic part of the base (67-76% of Democrats)- who knocked on doors, donated, called – wants an impeachment inquiry to begin and see if articles are merited. That’s why we worked to take the majority (2018)- to put a check on Trump. That will get support”

Here’re some quick benefits with the start of an impeachment inquiry:

The Impeachment inquiry is the one non legislative duty assigned to the House of Representatives by the US Constitution. That’s why the House’s hand is strengthened when it approaches the courts for relief in the collection of evidence and for requiring key witnesses to provide testimony. The committee members are no longer required to demonstrate that there’s a legislative intent underpinning their oversight duties.

Contrary to the president’s wishful thinking, the Supreme Court is barred from interfering with the House’s oversight investigations once it’s covered by the cloak of an Impeachment Inquiry.

The House’s Ways and Means Chairman Rep. Richard Neal would find it much easier to obtain President Trump’s past IRS tax records and other financial documents. Under the status of impeachment, Rep. Neal no longer requires a legislative basis to demand the president’s IRS records. To date, both the DOJ and the Treasury Secretary have argued that Mr. Neal doesn’t have a legitimate legislative reason to access the president’s tax records. The House Ways and Means Committee members plan to fight this claim by the White House in the courts where they’re convinced they’ll prevail.

politico.com/ To get Trump’s tax returns, Democrats must show they have a good reason…

See: Dear Dems, A US House’s Impeachment Inquiry Doesn’t Have To End In Transfer To US Senate