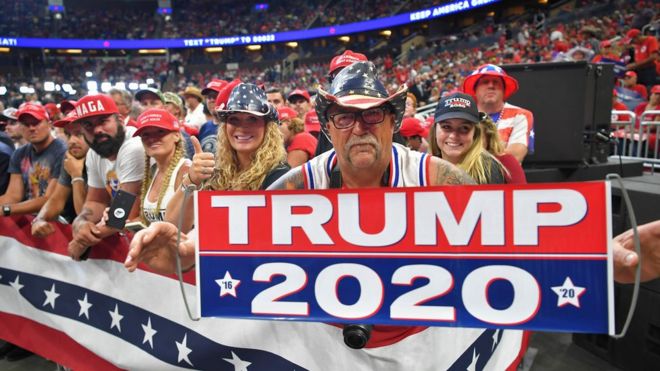 The republican President Donald Trump has planned to launch his 2020 elections’ campaign on the 18th of June 2019 in Orlando, Fl, at a stadium that can seat 20,000 of his die-hard supporters. It has been about 86 degrees in Orlando but it feels more like it’s in the mid 90s with the typical summer sporadic rain showers. But the peoples are lined up for miles. As reporters talk to folks in line, his loyal defenders are thrilled to share comments, like he’s the best president ever, and they ask, why do the reporters accuse him of lying when he’s not a dishonest man.

On the 18th of June, 2019, the Florida local paper, the Orlando Sentinel which is known for being editorially conservative, has made the unprecedented announcement that its Editorial Board will not endorse the republican President Donald Trump, ever, to become the GOP presidential candidate before the 2020 elections. In short, the Orlando local paper isn’t laying out the welcome mat. While the board members aren’t endorsing any presidential candidate yet, they are specifically letting it be known, that they cannot back President Trump, end of story. 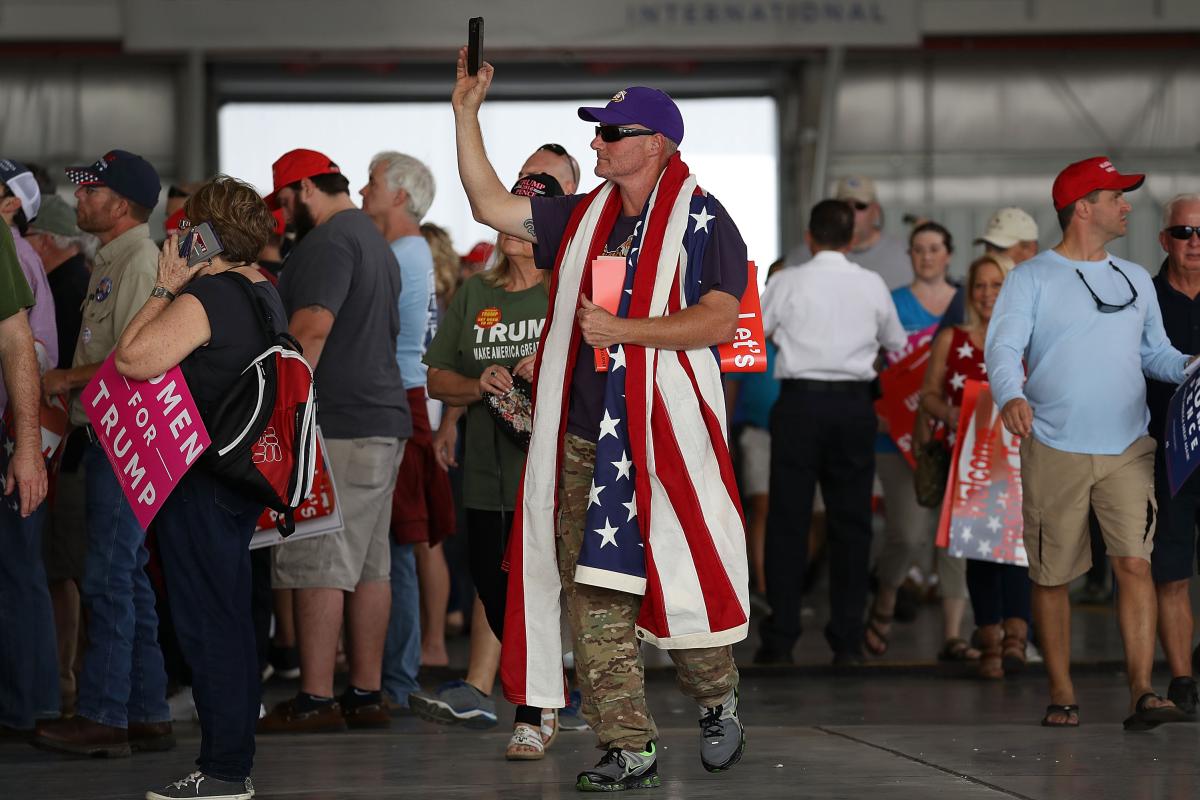 “We’re here to announce our endorsement for president in 2020, or, at least, who we’re not endorsing: Donald Trump.”

“Some readers will wonder how we could possibly eliminate a candidate so far before an election, and before knowing the identity of his opponent.

“Because there’s no point pretending we would ever recommend that readers vote for Trump.”

“Enough of the chaos, the division, the schoolyard insults, the self-aggrandizement, the corruption, and especially the lies.”

So many lies — from white lies to whoppers — told out of ignorance, laziness, recklessness, expediency or opportunity.

Trump’s capacity for lying isn’t the surprise here, though the frequency is.

It’s the tolerance so many Americans have for it.

There was a time when even a single lie — a phony college degree, a bogus work history — would doom a politician’s career.

Not so for Trump, who claimed in 2017 that he lost the popular vote because millions of people voted illegally (they didn’t). In 2018 he said North Korea was no longer a nuclear threat (it is). And in 2019 he said windmills cause cancer (they don’t). Just last week he claimed the media fabricated unfavorable results from his campaign’s internal polling (it didn’t).

According to a Washington Post database, the president has tallied more than 10,000 lies since he took office.

Trump’s successful assault on truth is the great casualty of this presidency, followed closely by his war on decency.

Trump insults political opponents and national heroes alike with middle-school taunts. He demonstrates no capacity for empathy or remorse. He misuses his office to punish opponents, as when he recently called for a boycott of AT&T to get even with his least favorite media outlet, CNN. He tears down institutions, once airily suggesting the U.S. should try having a leader for life as China now allows. He seems incapable of learning a lesson, telling an ABC interviewer last week — just 2 months after Robert Mueller’s report on election interference was released — that he would accept dirt on an opponent from Russia or China. 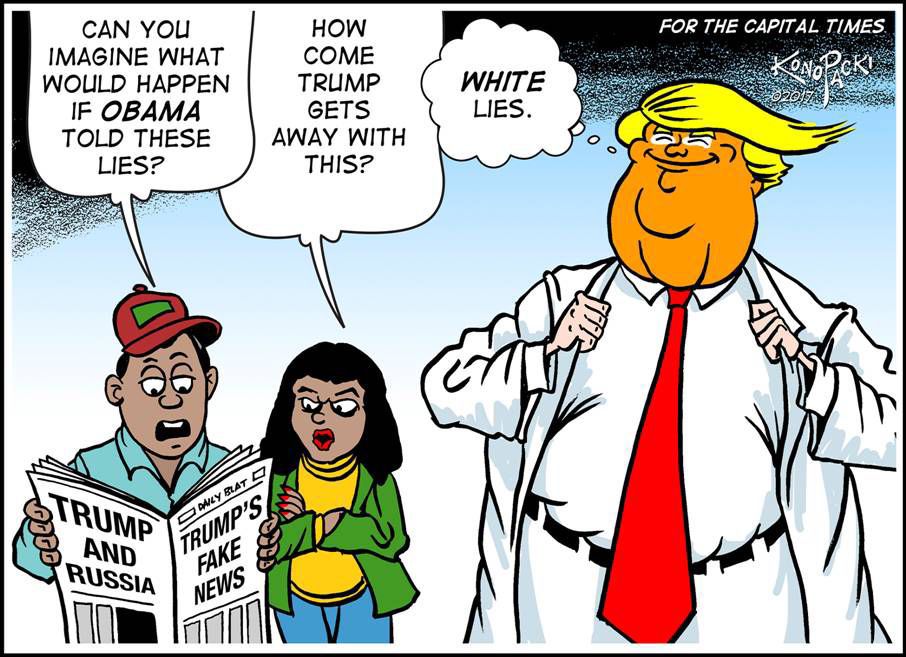 Trump has diminished our standing in the world. He reneges on deals, attacks allies and embraces enemies.

This nation must never forget that humiliating public moment in Helsinki in 2018 when the president of the United States chose to accept Vladimir Putin’s denials of Russian interference in the 2016 election over the unanimous assessment of the American intelligence community.

Such a betrayal by a U.S. president would have been the unforgivable political sin in normal times.

As if that’s not enough, Trump declares his love for North Korea’s Kim Jong-un, a genuine villain who starves and enslaves his people and executes his enemies with antiaircraft guns and flamethrowers.

“But he wrote the president a “beautiful letter.” Flattery will get you everywhere with this president, and that’s dangerous.”

“Domestically, the president’s signature issue — immigration — has moved in fits and starts. Happily, he abandoned pursuing an outright — and unconstitutional — ban on Muslims entering the U.S., opting instead to restrict travel for people from a handful of nations, most of them majority Muslim.”

“He’s tried separating families, sending troops to the border and declaring a national emergency. For all of that, illegal border crossings are, as the president himself calls it, at crisis levels.” 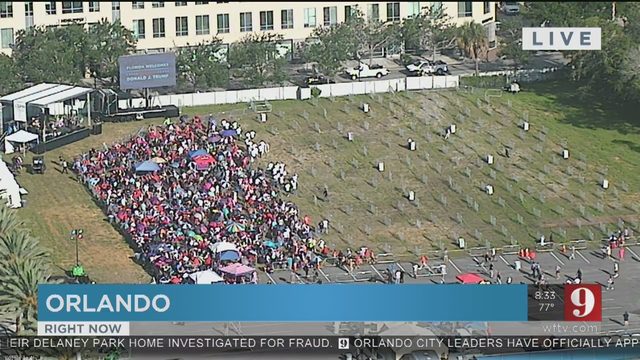 “He blames House Democrats because casting blame is Trump’s forte. But Republicans controlled the House and the Senate for two full years. That seemed like an ideal time to fix what the president believes ails our immigration laws.”

“Even with Democrats now controlling the House, where is Trump’s much-touted deal-making mojo, an attribute he campaigned on?”

“Yes, the market has done well since Trump’s election.”

“The S&P 500 was up about 21% between Trump’s inauguration and May 31 of his third year in office. Under President Obama, it was up about 56% in that same period.”

“Unemployment is headed down, as it was during 7 straight years under Obama.”

“Wages are up, and that’s a welcome change. But GDP increases so far are no better than some periods under Obama. Deficit spending under Obama was far too high, in part because of the stimulus needed to dig out of the Great Recession. Under Trump, it’s still headed in the wrong direction, once again pushing $1 trillion even though the economy is healthy.”

“Trump seems to care nothing about the deficit and the national debt.”

“Through all of this, Trump’s base remains loyal. Sadly, the truest words Trump might ever have spoken was when he said he could shoot someone on Fifth Avenue and not lose his supporters.”

“This non-endorsement isn’t defaulting to whomever the Democrats choose. This newspaper has a history of presidential appointments favoring Republicans starting in the mid-20th century. Except for Lyndon Johnson in 1964, the Sentinel backed Republican presidential nominees from 1952 through 2004, when we recommended John Kerry over another 4 years of George W. Bush.”