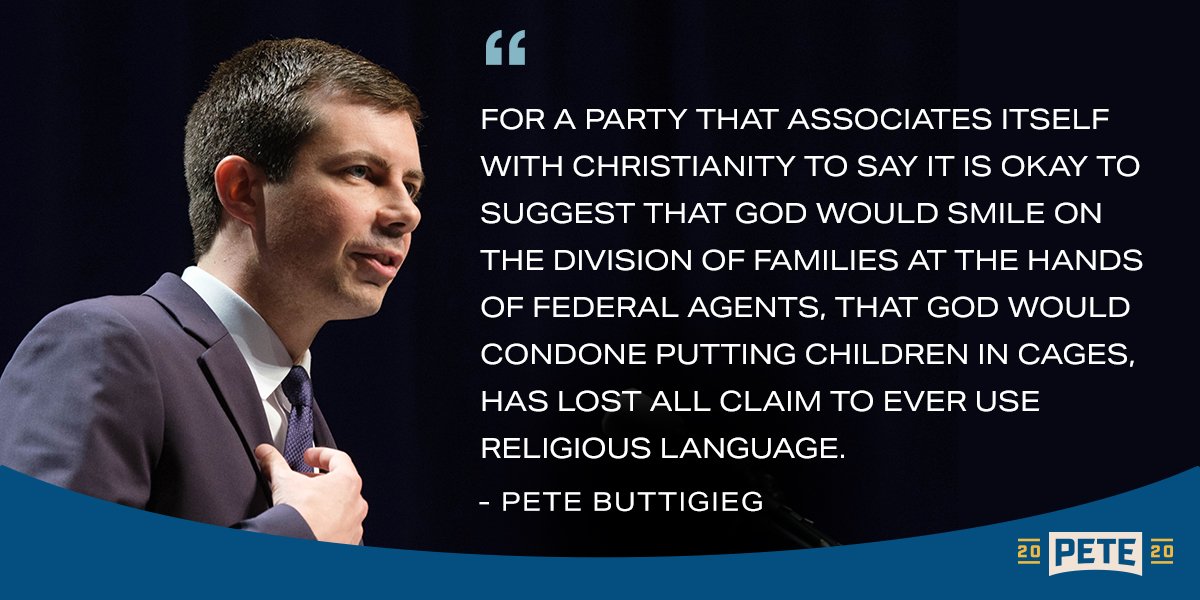 It warms my heart to watch a Democratic Party presidential candidate take on the White Evangelical crowd for their hypocrisy in using the name of “God” to justify their complicity in acts of evil, like the White House’s directive to cruelly treat refugee children whose families have been seeking legal asylum at the US SW border. On the evening of the 27th of June 2019, at the Democratic Party’s 2nd debate for some of its candidates, it was Mayor Pete Buttigieg who took this project on, the questioning of how it is that White Evangelicals back President Trump in overwhelming numbers, without any hesitancy.

If you talk to anyone from this crowd, they will explain how God has sent President Trump to them to champion their causes. There’s even a movie, titled the “Trump Prophecy,” that’s a propaganda piece reinforcing this concept that God is behind President Trump.

Those in the republican President Donald Trump’s close orbit who would be receptive to this concept of him being God’s tool, are the VP Mike Pence, the Secretary of State Mike Pompeo and the Attorney General William Barr.

Keep in mind that many of these so-called Christians helped spread the rumors about the former Democratic Party President Barack Obama,that he wasn’t an American citizen; that he was really was born in Kenya; that he’s not a Christian as he claimed, but a Muslim; that he hates this country; that he’s the Anti-Christ and that he’s an illegitimate president. There’s a definite strain of racism permeating through many of the hearts of these Evangelicals which has nothing to do with God.

Here’s the rest of this story…

The second night of the first Democratic debates focused on the American values that have been corrupted under Trump, in the view of the 2020 candidates.

Pete Buttigieg, the mayor of South Bend, Indiana, called out Republicans for what he described as moral hypocrisy during the second night of the first Democratic presidential debates, in Miami. The conversation had turned to the border, where Donald Trump’s administration has continued to separate families seeking asylum and is detaining children in facilities reportedly without soap or toothbrushes or showers. “For a party that associates itself with Christianity, to say that … God would smile on the division of families at the hands of federal agents, that God would condone putting children in cages,” Buttigieg said, “has lost all claim to ever use religious language again.”

Under Trump, conservative Christianity has come to be singularly associated with the president. White evangelical voters brought him to the White House and continue to give his administration high approval ratings. White Catholics were arguably the swing voters who gave Trump his 2016 victories in states such as Wisconsin and Pennsylvania. And Trump has leaned into this image as the ultimate president for religious voters.

On the debate stage, Buttigieg gave voice to a view that has become common among Democratic voters: Many of Trump’s policies, along with his conduct as president, do not reflect Christian values. “The Republican Party likes to cloak itself in the language of religion,” Buttigieg said. “We should call out hypocrisy when we see it.”

This has been a theme throughout Buttigieg’s campaign. The mayor has spoken openly about his religious faith and rallied religious rhetoric to his advantage: This spring, he called out Mike Pence for his opposition to same-sex marriage, saying, “Your quarrel, sir, it is with my creator.”

“This is a departure from the usual playbook for the Democratic Party. As Buttigieg himself pointed out, “Our party doesn’t talk about [religion] as much.” The reason for this, he said, is that Democrats are committed to the separation of Church and state, and that the party wants to stand for all people, regardless of their religion. But it may also be a reflection of the growing irreligiosity of the Democratic base: The party’s most politically engaged voters tend not to be affiliated with any particular faith. Buttigieg’s knack for speaking in the language of God makes him exceptional within his generation, but it may also be a strength in reaching the swing voters and voters of color whom Democrats so badly need. Of all the candidates onstage, he spoke most directly to the anger that many Americans seem to feel at the way religion has been co-opted by the Trump administration, at odds with the faith they deeply hold.”

Caitlin Flanagan: Christ in the camps

Read: Democrats have to decide whether faith is an asset