House Speaker Pelosi VS. Squad Of 4 Need to Form Truce/ They Can Learn A Lot From Each Other

The political savvy Democratic Party House Speaker Nancy Pelosi has the wisdom and knowledge based on years of experience in the House with the scars to show for it. She has earned the respect she deserves by most in the political arena.

Speaker Pelosi has been laser focusing her ire on 4 Freshmen House members called the SQUAD, who have stretched her patience to a breaking point but the reverse is also true. They are Alexandria Ocasio-Cortez, Ilhan Omar, Ayanna Pressley, and Rashida Tlaid.

Both sides need to be locked in a room until they manage to iron out their differences which are real, to arrive at a truce. Unity should not be translated into whatever the speaker dictates or vice versa. We need both sides to work together to motivate the base to turn out in record numbers in 2020.

But in my opinion, the House Speaker Nancy Pelosi is making the same mistakes that the Democrat leadership did when the Reagan Conservative Revolution era was ushered in around 1980-1987, as a backlash to the more liberal Democratic Party era where its movers and shakers didn’t take the time to listen to their constituents to assess the dissatisfaction that was growing among its ranks. The Democrat leaders paid a big price with the resulting loss of power for years to come because of the hubris shared by them where they thought they knew better about what the voters wanted.

I’m convinced that the House Speaker Pelosi is repeating the missed opportunity to adjust to a changing political climate that the Democrats suffered from the Reagan era. She knows what’s best, and in most cases, she’s probably right on the money.

But this is a  time where she could literally end up ruining the Democratic Party chances for big wins in 2020 by being too worried about protecting the House Democrats from Trump districts, who won by narrow margins and who gave her the majority of Democratic Party seats in the US House of Representatives. Her worry about the possibility of risking this newly acquired House Democratic Party majority in 2020 has merit, but she’s not seeing the bigger picture. The tide is turning where many of the more progressive ideas are becoming much more popular. The Speaker needs to catch that wave and ride with it.

It started on 7/6/2019 when Rep. Ocasio-Cortez’s chief of staff, Saikat Chakrabarti, tweeted and then deleted a reference to centrist Democrats as the “new Southern Democrats” (segregationists) that  “seem hell bent to do black and brown people today what the old Southern Democrats did in the 40s.”

“In the coverage of the debate between Nancy Pelosi vs @AOC, @AyannaPressley, @IlhanMN, and @RashidaTlaib the media is doing a poor job reporting the fact that 95 Democrats opposed the border bill, including the Hispanic Caucus. 129 Democrats joined Republicans to pass it.”

Grace SegersVerified account @Grace_Segers
“House passes unchanged version of Senate border bill: Only 129 Democrats voted for the bill, while 95 Democrats voted against it. It passed with Republican help, as 176 Republicans voted in favor of the bill. Only seven Republicans voted against it.
https://www.cbsnews.com/news/border-bill-house-passes-4-6-billion-senate-bill-for-emergency-funding-along-border/ …”
2:06 PM – 11 Jul 2019

Democratic Party base younger members do think differently than their elders….

It would be helpful if the House speaker would acknowledge importance of young peoples as part of her base in 2020. These are the constituents/ followers of the SQUAD. As per a 1/30/2019 Axios report by Stef W. Kight,  “Millennials and Gen Z will make up 37% of the 2020 electorate:” 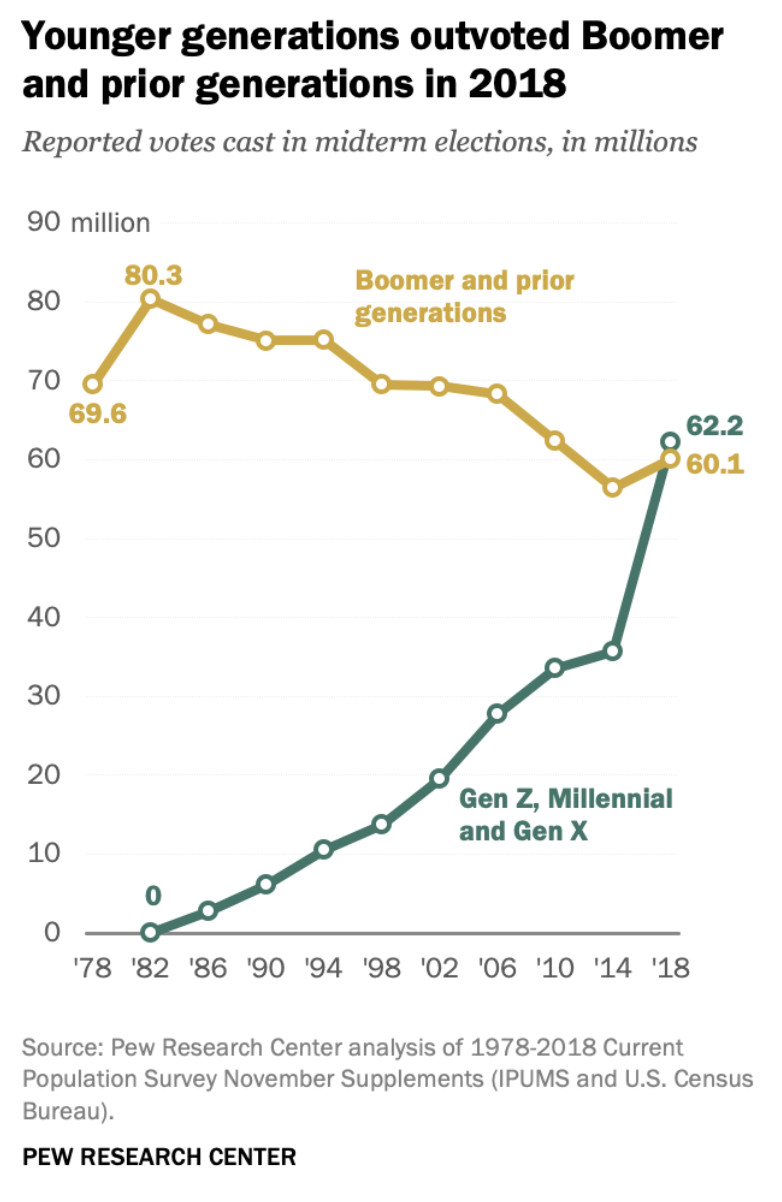 Voters ages 18 to 53, including millennials, Generation X, and young voters, cast more votes than baby boomers and older generations amid a modern record high turnout in the 2018 midterm elections, according to a new Pew Research Center analysis.

Voters younger than 53 accounted for a narrow majority of the total voter turnout by casting 62.2 million votes, while the older generations cast 60.1 million votes, the research said.

s per the 2019 Statista report, “In February 2019, it was found that 38 percent of adults in the US aged between 18 and 29 years used Twitter. This age group was the micro-blogging service’s biggest audience in the United States, followed by a 27 percent usage reach among 30 to 49-year-olds.” In short, Twitter consumers are mostly of the younger generation and that’s why the comments on twitter appear to not reflect the wider thinking of Democratic Party members. For example, only 7% of twitter users are over 65 years old.

As per a recent Cook Political report, President Donald Trump could lose the popular vote in the upcoming November 2020 elections by 5 million votes but still win the electoral college map votes. In short, it is very possible that President Trump will win a second term in 2020. If that happens, her chances are sketchy at best of holding onto her majority of Democratic Party seats in the US House. This is a time for the speaker to consider taking a more offensive posture towards maintaining her majority position by backing an impeachment inquiry/ investigation.

WAPO report: If the latest polls are right, Trump is favored to win reelection 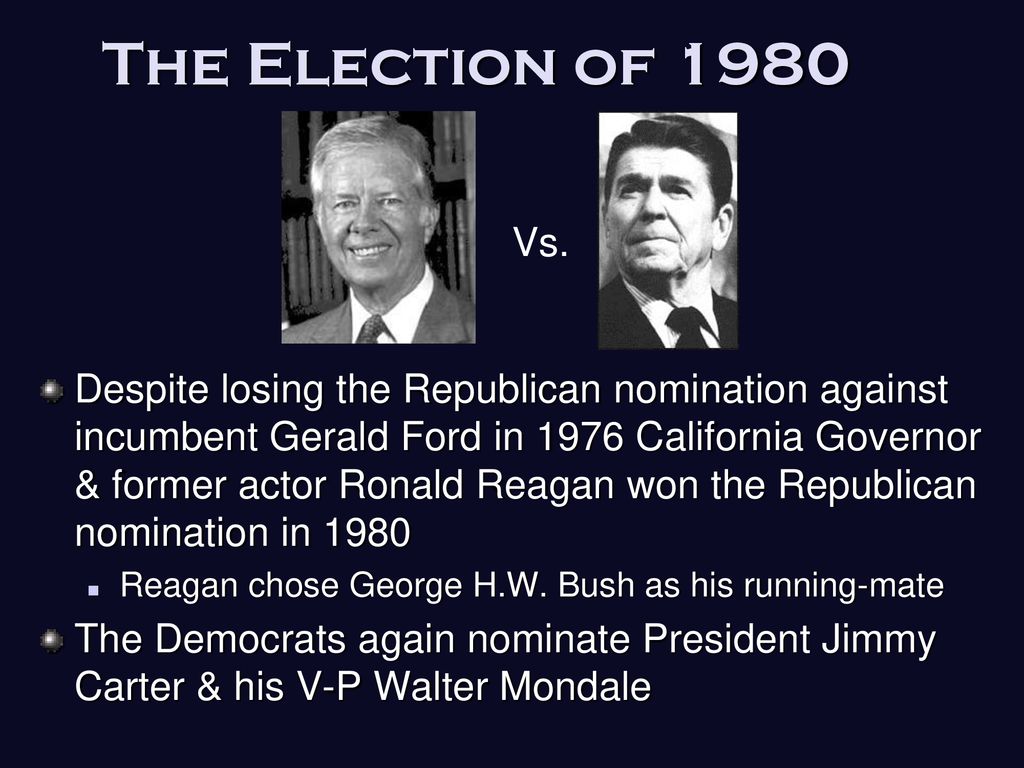 “It’s hard to overstate how traumatizing that 1980 landslide was for Democrats. It came just two years after the rise of the New Right, the Class of ’78 led by firebrands like Newt Gingrich, and it felt like the country was repudiating everything the Democrats stood for. The party that had saved the world from the Nazis, built the modern welfare state, gone to the moon and overseen the longest stretch of economic prosperity in human history was routed by a C-list actor. Reagan won 44 states.”

“That November saw not just Jimmy Carter defeated but a generation of liberal lions poached from the Senate. A net loss of 12 Democrats flipped the chamber to the Republicans. The Democratic nominee for president in 1972, war hero George McGovern, was ousted. Frank Church, first elected in 1956, had been chairman of the forerunner to the Select Committee on Intelligence. In 1976, he was a credible presidential candidate; in 1980, he was out of a job. Same with Birch Bayh, another presidential hopeful who’d served nearly 20 years in the Senate. Warren Magnuson, first elected in 1944, was chairman of the Appropriations Committee and the senior-most member of the Senate. Even Mike Gravel, a hero of the Pentagon Papers battle and a voice of the antiwar left, was beaten in a primary, leading to a fall GOP pickup of his seat. Collectively, the defeated Democrats represented every plank of liberalism — whether it was support for workers or the environment or opposition to militarism or racism. They were the party.” 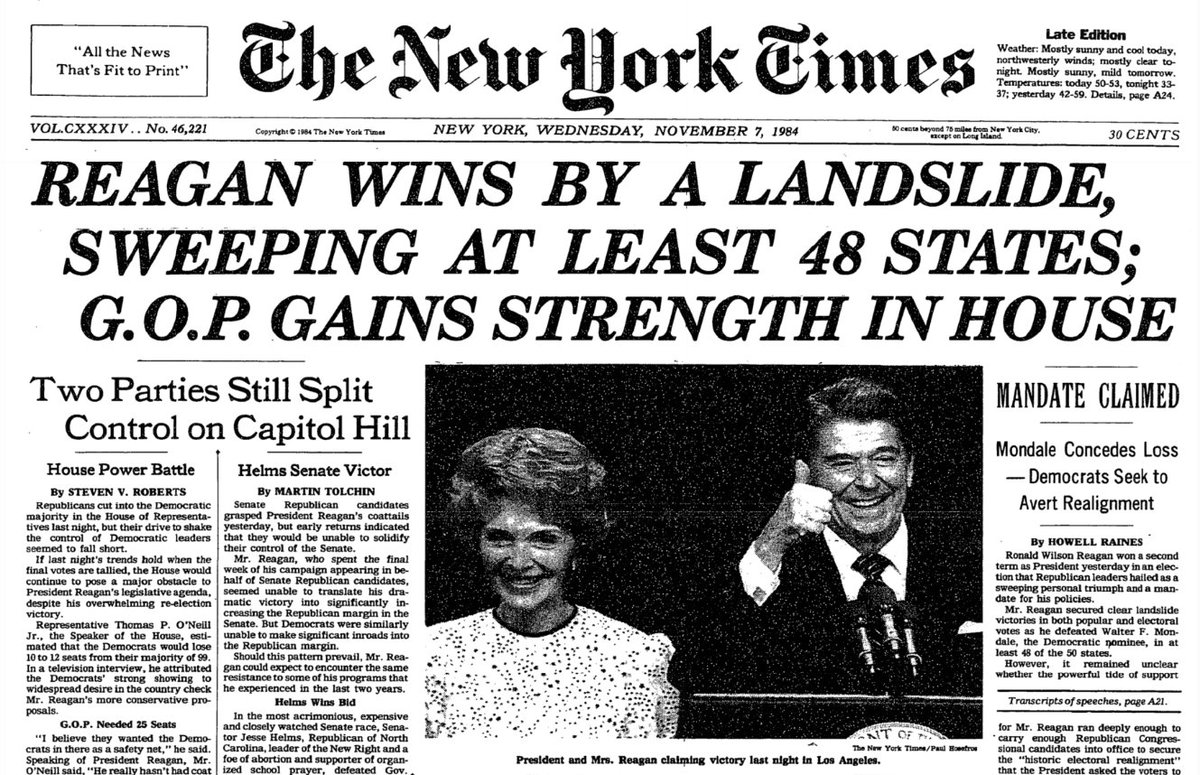 “Politicians like Pelosi, Schumer and Hoyer were just coming into their own. The lesson they took was that the party had gotten too liberal in the late ’60s and ’70s, and the Reagan Revolution was payback. They became convinced that the US was a center-right country and that they had to accede to that unfortunate reality.”

“Democrats have been unable to embrace the new political environment in which the progressive agenda is genuinely popular. Support for Medicare-for-all has been rising, but Ways and Means Committee Chairman Richard E. Neal (Mass.), first elected to the House in 1988, warned Democrats not to mention the phrase during a hearing intended to be about legislation to establish it. Roe v. Wade, meanwhile, has the support of roughly 4 in 5 Americans, while 65 percent of voters in battleground congressional districts back a $15-an-hour minimum wage. But Reagan haunts leaders, even in their vocabulary, which is still infected with the term “Reagan Democrat” — as if a voter who abandoned the party nearly 40 years ago is anything other than a Republican. “Those ethnic, blue collar voters, what we refer to as ‘Reagan Democrats,’ they’re the people we need to turn the Electoral College on Trump,” Larry Rasky, a long-time consultant to Biden, told Politico in April.

Link to article: Haunted by the Reagan era

Speaker Pelosi VS. The SQUAD….

On July 11, 2019, Michael Arceneaux of the Independent penned the following report, “AOC wants to change the world through action. Nancy Pelosi wants to do it through pithy phrases”

“In her column “It’s Nancy Pelosi’s Parade,” New York Times columnist Maureen Dowd argues this week that Nancy Pelosi has “offered a master class, with flair and fire, on how a woman can spar with Trump.” But how true is that assertion?”

“An ageing president with increasing displays of cognitive decline is presently shepherding in a far-right future for the US, complete with concentration camps  reportedly housing migrant children in conditions no human being should have to endure. As Trump does all of this with the sort of bellicosity expected of an entitled narcissistic bigot with a lifelong chip on his shoulder and penchant for grifting, there’s Nancy Pelosi… not even taking a stand with an impeachment inquiry/ investigation.”

“But we needn’t go there to counter the narrative Pelosi’s purported mastery of Trump — just look at her recent handling of $4.6 billion package intended to deal with the border crisis that is an invention of the Trump administration’s incompetence and cruelty.”

“The bill has been criticized for failing to set standards for the humane treatment of migrants held in federal custody. After all, why would anyone trust Trump and co with money designed to benefit migrants not from Norway? When asked about the criticism about the bill — namely that 4 first-time House Democratic women with national profiles voted against it — Pelsoi elected to be dismissive of Alexandria Ocasio-Cortez, Ilhan Omar, Ayanna Pressley, and Rashida Tlaid.”

“All these people have their public whatever and their Twitter world,” Pelosi explained to Dowd. “But they didn’t have any following. They’re 4 people and that’s how many votes they got.”

“As for the president, Pelosi says that on the daily, Trump “practically self-impeaches by obstructing justice and ignoring the subpoenas.” Spoiler: self-impeachment isn’t a thing and Trump has just reached the highest approval rating of his presidency. Pelosi and the Democratic leadership’s shared failure to paint in plainest terms the damage Trump has done to this country to the public — crimes, human rights abuses, corruption, and other malfeasances — is to help normalize them. Merely saying “this isn’t normal” does nothing if one’s actions don’t lend credence to cries of urgency.”

“Meanwhile, the women Pelosi snidely mocked for having “their public whatever and their Twitter world” continued to prove that they are fast becoming the moral compass of the Democratic Party. “

Link:  AOC wants to change the world through action. Nancy Pelosi wants to do it through pithy phrases. I’m bored with the folk tale of Nancy Pelosi in which she drives the aspiring tyrant Trump mad by using ironic turns of phrases”