“Ethnic slurs and other verbal or physical conduct because of nationality are illegal if they are severe or pervasive and create an intimidating, hostile or offensive working environment, interfere with work performance, or negatively affect job opportunities. Examples of potentially unlawful conduct include insults, taunting, or ethnic epithets, such as making fun of a person’s foreign accent or comments like, “Go back to where you came from, ” whether made by supervisors or by co-workers.”

During the month of July 2019, the republican President Donald Trump has been breaking the law as he lobs racist remarks against the Squad, 4 House Democratic Party’s freshmen women of color. He’s knowingly creating a toxic environment for these 4 duly elected US House of Representatives’ lawmakers and women of color.
****

****
This past week of July 16, 2019, the House has passed both a resolution condemning Donald Trump’s racist tweets against 4 House Democratic Party’s freshmen women of color who are, Reps. Alexandria Ocasio-Cortez of New York, Ilhan Omar of Minnesota,  Ayanna Pressley of Massachusetts, and Rashida Tlaib of Michigan ; and “contempt charges” in order to hold Atty. Gen. William P. Barr and Commerce Secretary Wilbur Ross accountable for their refusal to comply with its subpoenas regarding the 2020 census citizenship question.
****
In the meantime, the Democratic Party Rep.Al Green from Texas, for the first time out of 3 attempts since his party took over the majority position in the US House of Representatives, had introduced on the House’s floor, “Articles of Impeachment” based on President Trump’s overt racist movement, which was tabled, as there weren’t enough votes to pass it.

****
What’s surprising is that 95 House Democrats voted on behalf of Rep. Al Green’s resolution, including the House Judiciary Committee’s Chairman, Rep. Jerry Nadler. All the GOP members along with 137 House Democrats voted against it.
****
Personally, I who am pro-impeachment inquiry/ investigation would have voted against it, as he went directly to having the House voting on “Articles of Impeachment (the last step in House impeachment process),” skipping the investigative/ inquiry stage where the House has the opportunity to educate the public as to all the crimes and “abuses of power” that’s he’s been accused of committing, as per the 3/22/2019 FBI’s final report regarding its 22 months long Trump-Russia probe, led by the Special Counsel Robert Mueller III and other evidence.
**** 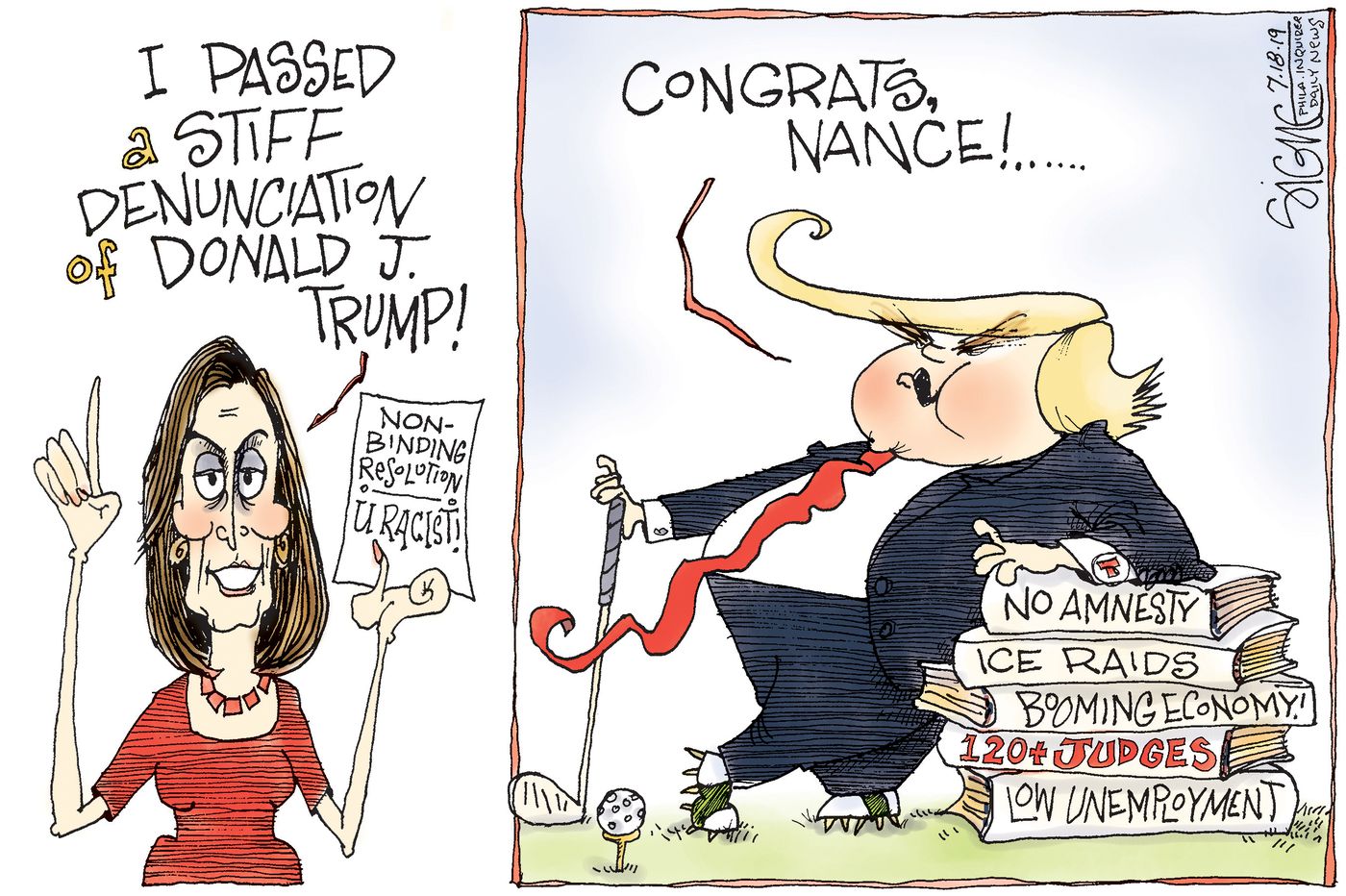 ****
I’m believing that at some point, the House Speaker Nancy Pelosi will have to give into her base’s demands to have the House implement its constitutionally mandated duty to commence an “impeachment/ inquiry against President Trump. Even though, he’ll not be convicted in the US Senate, he’ll be like all the other impeached presidents who are forever marked by the -I-word, despite fact that none were ousted by US Senate.
****
Speaker Pelosi must know that President Trump will claim vindication if he’s not convicted by GOP led US Senate or if she never initiates an impeachment inquiry/ investigation. For example, she can count on President Trump touting the claim that the House didn’t act to impeach because he’s not guilty of any of the accusations being lodged against him and the proof’s in the pudding, because the House never acted to impeach him.
**** 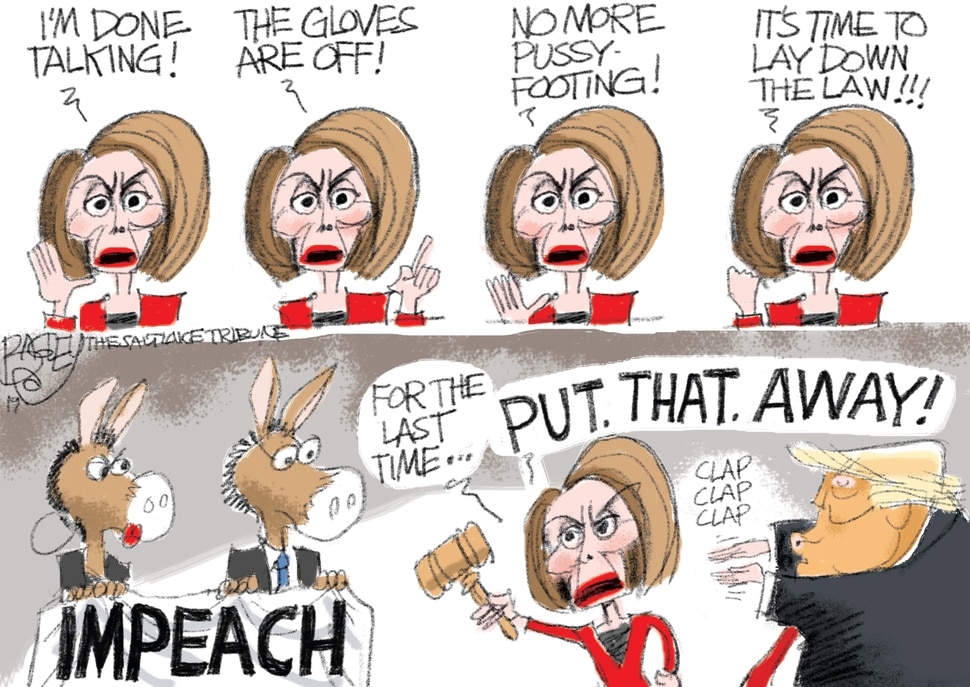 ****
Incidentally, President Trump can be impeached by the US House of Representatives and still face criminal charges when he leaves office in January 2021, but if he wins reelection in November 2020, via the electoral college map, he may never have to face any federal criminal consequences for his lawlessness, ever, because there’s a 5 year “statute of limitations” for the federal crimes he’s alleged to have committed.
****
There are some who suggest that the “Statute of Limitations” can be tolled/ stopped while he’s serving his 2nd term in the White House but that’s not true in criminal law. There’s talk of passing legislation to fix this problem which will never see the light of day as the GOP controlled US Senate will block its passage.
****

There’s a DOJ US Department of Justice’s rule that bars the judicial system from criminally indicting a sitting president while he’s still serving in office. But, in addition, because President Trump has managed to weaponize the DOJ under the leadership of the US Attorney General William Barr, who has proven himself to be the president’s eager and obedient partner in abusing the power of the state to advance the president’s political interests, we already know that he’ll never lift a finger to hold the president accountable.
****
In conclusion, unless President Trump is subject to an impeachment inquiry by the House, he won’t be facing federal criminal charges until after he leaves office, at the earliest, January 2021, and if he’s reelected in 2020, he’s likely to game the system to where he can’t be held criminally accountable.
****
Here’re tweets reflecting recent news:

@rachaelmbade tweeted following on 7/17/2019:
“House Dems are letting @GOPLeader motion to table rather than doing it themselves. (Smart given the unhappy base) This motion to table is expected to pass/be adopted. Some Dems not happy about it, but Dem leaders will basically be working w/Rs to kill this Al Green resolution.”
****

#MarchForTruth tweeted following on 7/17/2019:
@MarchForTruth17
“If you are in favor of an impeachment inquiry, today was a good day. 95 Representatives voted against tabling @RepAlGreen‘s impeachment resolution, including Judiciary Chairman @RepJerryNadler and Foreign Affairs Chairman@RepEliotEngel. It’s subtle- but the tide is turning!”
6:05 PM · Jul 17, 2019 ·
****
@RepAdamSchiff tweeted following on 7/17/2019:
“The Trump Admin misled Congress and the courts about its efforts to add a citizenship question to the Census. AG Barr and Sec. Ross refused to comply with a subpoena because it would expose their corrupt effort to undermine the Census. I just voted to hold them in contempt.”

Los Angeles Times
@latimes
“Breaking: The House voted to hold Atty. Gen. William P. Barr and Commerce Secretary Wilbur Ross in contempt of Congress for refusing to comply with its subpoenas regarding the 2020 census citizenship question. “
7:16 PM · Jul 17, 2019 ·
****
@TimOBrien who wrote President’s book, “Art of the Deal,”tweeted following on 7/16/2019:
“Trump’s first wife, Ivana, told her lawyer during their divorce that Trump kept a copy of Hitler’s collected speeches by his bedside in Trump Tower. When a reporter questioned Trump about the book in 1990, he balked and then said it was a gift.”  https://www.bloomberg.com/amp/opinion/articles/2018-10-24/trump-lobs-a-nationalist-grenade-into-the-midterms…
8:52 PM – 16 Jul 2019
***

“The House on Wednesday (7/17/2019) easily defeated an effort from a Texas Democrat to impeach President Donald Trump in the first vote that Congress has taken related to impeachment since Democrats took control of the chamber.”

“Rep. Al Green was able to force the vote under House rules, in what amounted to the most direct challenge yet to House Speaker Nancy Pelosi’s handling of impeachment.
The 332-95 vote showcased the stark divide among Democrats, who split over the vote to kill the impeachment measure. Ninety-five Democrats — a little more than 40% of the Democratic caucus — voted against tabling it, or to keep it alive.”
****
“Republicans helped Democrats table the resolution to show bipartisan opposition to impeaching the President on the grounds laid out in the Green resolution, according to a senior GOP leadership aide.”
Read: House kills solo Democrat’s bid to impeach Trump…