“We the People” have been hearing the words, that the republican President Donald  J. Trump is the symptom of what’s been permeating the GOP world for decades.

As a former GOP member until 2016, I left because of what I perceived was a party, where racism had become an invasive virulent disease that has been growing within the Republican Party ranks.

I discerned that when President Trump began his campaign to become the 45th US president with his rant against immigrants, based on hyperbole, false data, outright lies that this was code that would not only appeal to the anti-immigration hardliners, but many of whom are racists. When the president gave cover to White Supremacist type groups as he did with the 2017 Unite the Right rally in Charlotteville, VA. by referring to them as fine peoples, he was condoning their behaviors and beliefs, which are mostly Antisemitic in nature. In the USA, the anti-immigration stance against refugees of color and those with Muslim backgrounds equals racism which equals Antisemitism. That’s why after President Trump moved into the White House, hate crimes across the board for all minority communities have spiked.

It’s only logical to question, why on earth would the GOP lawmakers in the US Congress be in the position to recently have to cover for the president’s explicit racist tweets against 4 Democratic Party freshmen House members of color, known as the Squad? He’s been pontificating that if these congress representatives are so critical of him and the USA, then they ought to leave the USA to return to their homes. It mattered little that three of these representatives were born here in the USA and that one was born in Somalia but moved to this country as a 12 year old child before becoming a US naturalized citizen.

Has anyone wondered why there hasn’t been more backlash by the business community regarding the president’s imposition of tariffs on even our neighbors and allies along with the trade war that he’s instigated between the US and China, especially since there’s no sign of a pending trade deal between the two countries. Then there’s the president advertising that he wants to cut back on legal immigration by 50%, which is a policy that’s typically not supported by the business community.

The above scenario only makes sense if the goal has been to establish an authoritarian government in the USA by GOP conservative special interests who have figured out that the future voting demographics favor the Democratic Party, bigly. Does anyone believe that these dark money GOP donors would graciously accept the reality that all the monies they have invested over the years in owning the Republican Party will be for naught? My opinion is that there’s no way that these powerful wealthy conservatives would graciously sit back as they watch their power being diminished.

It’s the same old story…Follow the money…The GOP lawmakers in the US Congress know full well that these big donor monies will dry up if they dare to challenge the president. Then these same donors will fund other more compliant candidates to challenge them when they run for reelection as they ostracize the recalcitrant members, as in the recent case of MI Rep. Justin Amash who just left the GOP and the former NC Senator Mark Sanford.

If President Trump has to cater to the numerous factions of his base with various policies like spouting racist and anti-immigration rhetoric, initiating tariffs against our neighbors and allies, starting a trade war with China, then so be it. He hasn’t acted on any policies that aren’t in his and his rich buddies’ personal best interests and/ or which cater to his base of voters. And if the president’s actions aren’t in the US best national security interests, as per these donors, then so, what?

In March 2019, the US House Democrats passed the election reform bill which requires “dark money” political groups to publicize their donors; and in June 2019 they passed the  Secure America’s Future Elections Act or the SAFE Act to prevent Russia and other nefarious actors from successfully interfering in future US elections, as was done in 2016, but both bills have been declared DOA in the GOP led US Senate.

This is just one more reason that I’ve become a strong advocate for the US House of Representatives using the power granted it by the US Constitution to commence an impeachment inquiry/ investigation against President Trump, based on the the detailing of the president’s numerous felonious acts enumerated in the FBI’s 3/22/2019 final report, regarding its 22 months long Trump-Russia probe, led by the Special Counsel Robert Mueller.

Here’s a link to several articles regarding authoritarian governing in the USA: support for authoritarianism.  Several of these articles are pre-Trump presidency which highlights the reality that this issue was being debated before President Trump moved into the White House. The exception to this is the Jane Meyer book, “Dark Money.”

As per the 4/12/2017 LA Times article, “Jane Mayer discusses her book ‘Dark Money’ and its ongoing relevance” by Kate Tuttle:

“The nature of truth, Mayer makes clear in her book, is very much at stake in our political system these days. “Dark Money” expands beyond the Kansas-based Republican kingmaker Kochs to explore the way a small number of extremely wealthy individuals, over the last several decades, used tax laws designed for philanthropy to construct a network of institutions, media organizations and political action committees to heavily influence — and at times, subvert — our democracy. As Mayer writes, the Kochs are part of “a small, rarefied group of hugely wealthy, arch-conservative families that for decades poured money, often with little public disclosure, into influencing how Americans thought and voted.”

“Vast sums of money in the form of what Mayer calls “weaponized philanthropy” funds battles against taxes, labor unions, environmental regulation, scientific research and civil rights efforts. Secrecy is a big part of the story. “The covert nature of these maneuverings that really caught my eye,” she explained.”

“Mayer said, but after the book came out they found themselves harshly attacked by conservative pundits and writers. “We were kind of early canaries in the coal mine in seeing what it’s like and how rough it can be when political partisans come at you,” Mayer said. “We thought we were just documenting the facts.”

“When it came to the 2016 presidential election, the Kochs’ network raised $889 million for a candidate they wanted to back — and didn’t find one. Donald Trump, Mayer said, “certainly wasn’t the candidate they had in mind.”

“Although the Kochs didn’t work for Trump’s election, there’re many Koch allies with roles in the administration, including Education Secretary Betsy DeVos and EPA head Scott Pruitt. “He’s now got a number of people in his administration who are delivering on many things the Kochs want, particularly on the environment,” Mayer says. Most of the families profiled in “Dark Money” made their fortunes in the gas and oil industry; they fiercely oppose any action to address climate change.”

As per the 11/2/2016 Washington Post report, “Here’s what citizens who vote for authoritarians have in common” by Amy Erica Smith and Mollie J. Cohen, “What do individuals who vote for strongmen have in common? Do Trump’s supporters in the US share core psychological traits with supporters of populist and authoritarian leaders in other countries? We look into that in our new article, forthcoming in Research & Politics. Two measures proved important: authoritarianism and levels of education.”

Racial prejudice, not populism or authoritarianism, predicts support for Trump over Clinton] “In the 5 days leading up to the South Carolina Republican primary I fielded a survey of 358 likely voters, hoping to better understand who supports Donald Trump, why, and what it may mean for the Republican presidential nominating contest.”

“What I found is a trend that has been widely overlooked. A voter’s gender, education, age, ideology, party identification, income, and race simply had no statistical bearing on whether someone supported Trump.”

“Here is what did: authoritarianism, by which I mean Americans’ inclination to authoritarian behavior. When political scientists use the term authoritarianism, we aren’t talking about dictatorships but about a worldview. People who score high on the authoritarian scale value conformity and order, protect social norms, and are wary of outsiders. And when authoritarians feel threatened, they support aggressive leaders and policies.”

“Authoritarianism and a hybrid variable that links authoritarianism with a personal fear of terrorism were the only 2 variables that predicted, with statistical significance, support for Trump.”

“Put simply, Trump won South Carolina because of the overwhelming, unyielding support of authoritarian voters. This chart shows the predicted relationship between authoritarianism and support for Trump. It is statistically and substantively significant — and, as you can see from the upward plot of the line, stunning.”

“For some time, I have studied authoritarian attitudes among Americans. This December, under the auspices of the University of Massachusetts Amherst, I conducted a national poll measuring authoritarianism, along with more typical demographic and political factors. It found that, nationally, only authoritarian attitudes and fear of terrorism — not income, age, education, or even race — predict with statistical significance whether someone will support Trump.”

“Both surveys measured authoritarianism with a simple battery of four questions related to parenting. Political scientists, including Marc Hetherington, Jonathan Weiler, and Karen Stenner, have used these questions since the early 1990s to estimate authoritarianism because of their accuracy in predicting authoritarian behavior.” 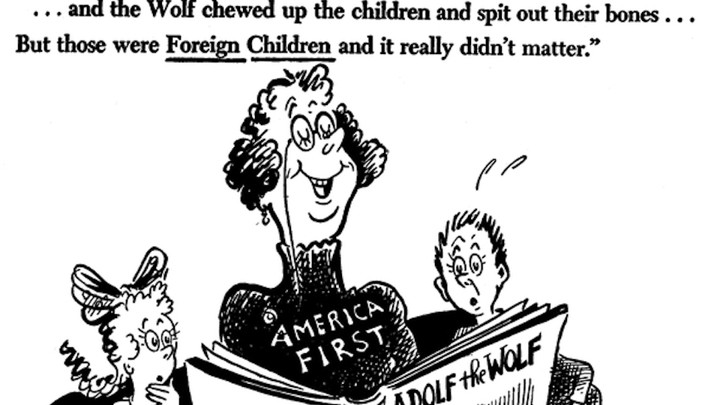 “Individuals with a disposition to authoritarianism demonstrate a fear of “the other” as well as a readiness to follow and obey strong leaders. They tend to see the world in black-and-white terms. They are by definition attitudinally inflexible and rigid. And once they have identified friend from foe, they hold tight to their conclusions. This intransigent behavioral tendency of authoritarians may help explain why Trump’s support can seem, as a strategist for Marco Rubio complained in the NY Times, like “granite.”