On the morning of the 24th of July, 2019, a Washington DC court had ruled in favor of the republican Donald Trump’s administration implementation of his new sweeping changes regarding Central American refugees seeking legal US asylum at the US SW border. The judge was allowing President Trump to act on his new rules while the case wound itself through the higher court systems.

Fortunately, by the evening of the 24th of July 2019, another US court overruled the Washington DC court’s opinion by staying/ not permitting President Trump to continue executing his new, wide sweeping asylum legal requirements.

The Latest on court rulings over the Trump administration’s new asylum restrictions (all times local): 7:30 p.m.:

“A federal judge in California has blocked the Trump administration from enforcing new asylum restrictions for people crossing the U.S.-Mexico border.”

“Wednesday’s (7/24/2019) ruling by U.S. District Judge Jon Tigar in San Francisco came hours after a judge in Washington decided to let the rules stand while lawsuits played out in court.”

“The policy would prevent most migrants from seeking asylum in the U.S. if they passed through another country first.”

“It targets tens of thousands of Central Americans who cross Mexico every month to try to enter the U.S. It also would affect asylum seekers from Africa, Asia and South America who arrive regularly at the southern border.”

“Legal groups argued the proposal was barred by federal law establishing how people can seek asylum.” 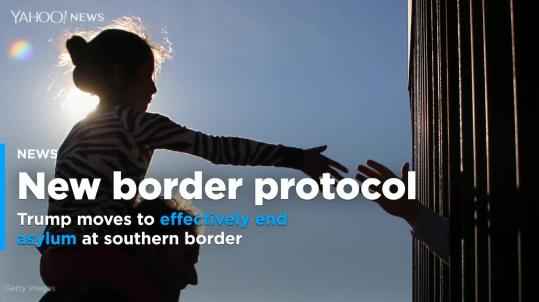 “The Trump Administration announced rules that migrants coming from Central America who have passed through other countries en route to the U.S. border will no longer be able to make a claim for asylum beginning July 16. Immigration attorneys and experts say the rule is a violation of domestic and international asylum laws, and federal judge has sided with the administration in one of two cases brought against the new rule.” 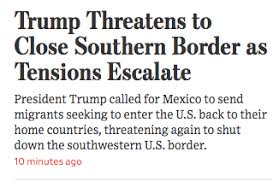 “On July 15, the Trump Administration announced the change to asylum rulesmaking it so that migrants had to have made an asylum claim at a previous country while en route to the U.S. before arriving to the southern border — anyone who hasn’t becomes ineligible for asylum in the U.S.”

“In response, groups working with migrants have been highly critical. Legal experts say the new rule violates both domestic and international law. The ACLU announced on July 16 that it had filed a lawsuit against the Trump Administration. On July 15, an ACLU official told TIME it would seek an immediate injunction.”