Dear Whistle-blowers with access to the White House, if there’re notes regarding any of the conversations between President Trumps and Turkey’s leader Recep Tayyip Erdogan and/ or the Russian President Putin regarding the removal of US military from NE Syria either in December 2018 or in October 2019, where the US military’s best allies in its fight against ISIS, the Kurds, are being abandoned to be slaughtered by the Turks from the North, now’s the time to come forward.

Just for review, its these same Kurds who’ve shed the lives of 11,000 of their compatriots with about 24,000 having been injured from 2014-2019, while they did the heavy lifting in the US military’s fight against ISIS; whereas, during this same time-frame, less than 10 US soldiers were fatally wounded. The Kurds sacrificed their lives to assist Americans with the promise that the US would help protect them from Turks who hate them more than ISIS. The US military was keeping their commitment to the Kurds with less than 3,000 US military special forces on the ground in Syria, directing their efforts until President Trump placed Russia’s national security interests before that of the US peoples.

In addition, the president’s foolishness will significantly increase the security threat levels against the US peoples and its allies. The Kurds have been maintaining over 10,000 hardened ISIS fighters who are trained to kill Westerners, in prisons. If the Kurds are forced to leave their posts to defend its territory and its peoples, these imprisoned terrorists are  likely to escape. Then these terrorists will be free to cause a lot of havoc with a major assist from President Trump.

In addition, no one from other countries will be prone in the future to trust the US promise and word again, whenever it needs help. 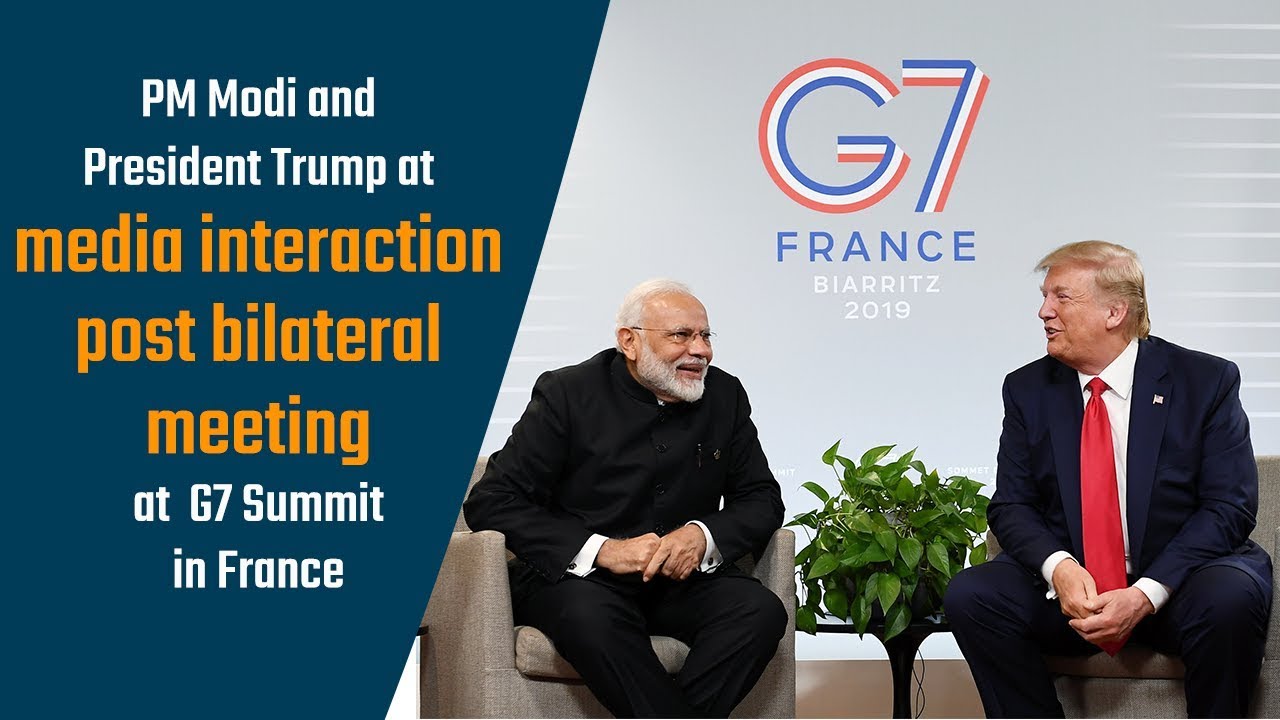 My adult daughter has become convinced that the republican President Donald J. Trump is virtually begging to be impeached. All his actions which includes his public confession regarding the Ukraine scandal where he admitted that his 7/25 phone conversation with Ukraine’s president had included a reference about seeking data on a political rival, VP Joe Biden; and then there was his public demand for China to act, similarly. She believes that President Trump’s self-destructive behaviors reveal, that on at least a subconscious level, he wants out of the White House but he’s conflicted because he can’t see a way to exit his nightmare of a reality show with some dignity.

The entire civilized world has been reacting to America’s sudden abandonment of its most trusted and effective local allies in its fight against ISIS, the Kurds, because of President Trump’s 10/7/2019 orders to the US military in Syria, to stand down and to desert their allies while he granted the Turks, the US stamp of approval for them to invade NE Syria to wipe them out, with the help from Turkey’s new BFF, President Putin of Russia. The US president made this decision based on his 10/6 lengthy phone conversation with Turkey’s president Recep Tayyip Erdogan without consulting any of his foreign policy advisers. his GOP allies in the US Congress or the Pentagon.

I’ve theorized that President Trump, as a Russian asset, hasn’t successfully managed to pay his debt to Russia by the lifting of sanctions imposed against Russia from 2014-2018, with the exception of the oligarch’s Oleg Deriposka case in 2019, or in disseminating the Russian inspired conspiracy theory that it was really Ukraine and not Russia which interfered with 2016 US elections, or in talking US allies into adding Russia back into the G7.

Consequently, Russia has been demanding its pound of flesh for all it did in 2016 to help President Trump win the US presidency.  President Putin has been wanting US military out of Syria for over a year, and so, President Trump has finally delivered.

See: Dear GOP In Congress, The Syrian Kurds Blood Is On You. Impeachment, Anyone?

As per the MSNBC News host Brian Williams of  “The 11th Hour ” on the evening of the 8th of October 2019, there’s reporting by sources on the ground, indicating that Turkey plans to attack by land and air in the very near future, the Kurds in NE Syria while the Russian military will provide support from the South, after the US military personnel have followed the president’s orders to stand down and to leave behind their best allies in the US fight against ISIS.

If there’s any delay in Turkey’s imminent plans to attack the Syrian Kurds, it’s because the GOP US Senator Lindsey Graham has promised to enact legislation as soon as Congress is back in session where he’ll impose stiff sanctions on Turkey, if its military touches one hair of the Kurdish peoples in NE Syria. Senator Graham claims to have ample support from colleagues to pass veto-proof legislation.

As per the 8/25/2019 Guardian report, “G7: Trump’s demands for Russia’s readmission cause row in Biarritz” by Julian Borger:

“Donald Trump has rowed with his fellow G7 leaders over his demand that Russia be readmitted to the group, rejecting arguments that it should remain an association of liberal democracies, according to diplomats at the summit in Biarritz.”

“The disagreement led to heated exchanges at a dinner on Saturday night inside the seaside resort’s 19th-century lighthouse. According to diplomatic sources, Trump argued strenuously that Vladimir Putin should be invited back, five years after Russia was ejected from the then G8) for its annexation of Crimea.”

“Of the other leaders around the table, only Giuseppe Conte, the outgoing Italian prime minister, offered Trump any support, according to this account. Shinzo Abe of Japan was neutral. The rest – the UK’s Boris Johnson, Germany’s Angela Merkel, Canada’s Justin Trudeau, the EU council president, Donald Tusk, and the French president, Emmanuel Macron – pushed back firmly against the suggestion.”

“On that point … it became a bit tense to say the least,” a European diplomat said. “Most of the other leaders insisted on this being a family, a club, a community of liberal democracies and for that reason they said you cannot allow President Putin – who does not represent that – back in.” 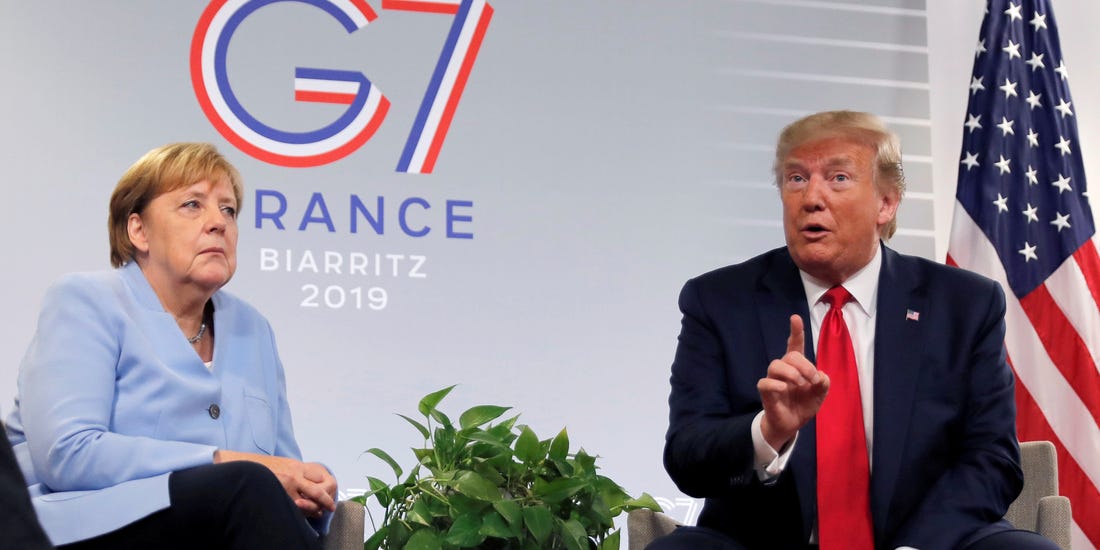 As per the 10/1/2019 VOX report, “The right-wing conspiracy theories behind Trump and Barr’s outreach to foreign leaders” by Alex Ward (The conspiracy theory about Ukraine):

“I would like you to find out what happened with this whole situation with Ukraine, they say CrowdStrike … I guess you have one of your wealthy people … The server, they say Ukraine has it. There’re a lot of things that went on, the whole situation,” Trump said.”

“Trump was referring to a debunked conspiracy theory: Ukraine — not Russia — interfered in the 2016 election, and CrowdStrike covered it up. It’s a belief he continues to hold even though his top aides have repeatedly told him the theory had been debunked.”

“CrowdStrike was hired by the Democratic National Committee in 2016 to look into who hacked into their networks during the election. The firm determined that it was 2 Russian groups with Kremlin ties.”

“What’s more, Trump seems to believe CrowdStrike is a Ukrainian company, not an American one. In a 2017 interview with the Associated Press, for example, Trump said CrowdStrike was “Ukraine-based” — even though its headquarters are in California. “I heard it’s owned by a very rich Ukrainian, that’s what I heard,” he continued.”

“That’s incorrect. The company’s cofounder, the Russian-born US citizen Dmitri Alperovitch, is a senior fellow at the Atlantic Council think tank in Washington, which receives funding from Ukrainian oligarch Victor Pinchuk. But that flimsy connection is a far cry from the firm he started being secretly run by an Eastern European billionaire. “