The republican President Donald J. Trump is desperate for some level of vindication or proof that the US premier law enforcement agency, the FBI had improperly acted when it initiated its counter-intelligence case against his campaign with his alleged ties to Russia which may have prompted his team’s cooperation with Russia’s full throttle attack on US elections infrastructure in 2016, to help him win the presidency.

The president’s attempts in 2019 to garner dirt on his likely rival and to develop proof that it was Ukrainian efforts that accounted for the interference in 2016 US elections versus Russia while he was in communication with Ukrainian officials, has backfired, bigly.

So, now what does President Trump do? Via his lackey, the Attorney General William Barr who heads the DOJ the US Department of Justice and the FBI, he turns the current administrative review over FBI’s handling of its Trump-Russian probe, led by the reputable Connecticut US Attorney/ Prosecutor John H. Durham into a criminal inquiry.

Because the US Attorney Mr. Durham, who had been assigned by Mr. Barr, has a solid reputation via successful investigations of previous high profile cases, I had foolishly thought that the administrative review of the FBI’s handling of its Trump-Russia probe would be appropriately managed. 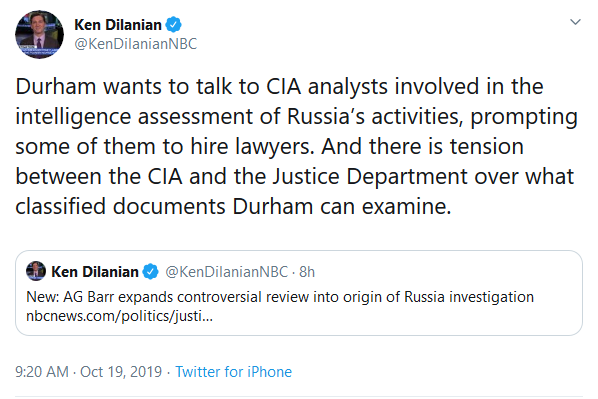 But now I’m worried that Mr. Durham may turn out to be another presidential lackey like Mr. Barr. Originally, the legal community’s consensus was that William Barr had a solid reputation to where he’d represent well the Department of Justice as the US attorney general, but instead he has turned this department which oversees the FBI from a non partisan entity into a political weapon to be utilized by the president against his political enemies or to vindicate him over perceived injustices.

On October 24, 2019, Katie Benner and Adam Goldman of the New York Times penned the following report, “Justice Dept. Is Said to Open Criminal Inquiry Into Its Own Russia Investigation.” (“The move is likely to open the attorney general to accusations that he is trying to deliver a political victory for President Trump.”)

“Mr. Trump’s own Justice Department has opened a criminal investigation into how (the FBI’s Russian-Trump probe) began.”

“Justice Department officials have shifted an administrative review of the Russia investigation closely overseen by Attorney General William  Barr to a criminal inquiry, according to two people familiar with the matter. The move gives the prosecutor running it, John Durham, the power to subpoena for witness testimony and documents, to convene a grand jury and to file criminal charges.”

“The opening of a criminal investigation is likely to raise alarms that Mr. Trump is using the Justice Department to go after his perceived enemies. Mr. Trump fired James Comey, the F.B.I. director under whose watch agents opened the Russia inquiry, and has long assailed other top former law enforcement and intelligence officials as partisans who sought to block his election.”

“Mr. Trump has made clear that he sees the typically independent Justice Department as a tool to be wielded against his political enemies. That view factors into the impeachment investigation against him, as does his long obsession with the origins of the Russia inquiry. House Democrats are examining in part whether his pressure on Ukraine to open investigations into theories about the 2016 election constituted an abuse of power.”

“The move also creates an unusual situation in which the Justice Department is conducting a criminal investigation into itself.”

“Mr. Barr’s reliance on Mr. Durham, a widely respected and veteran prosecutor who has investigated C.I.A. torture and broken up Mafia rings, could help insulate the attorney general from accusations that he’s doing the president’s bidding and putting politics above justice.” 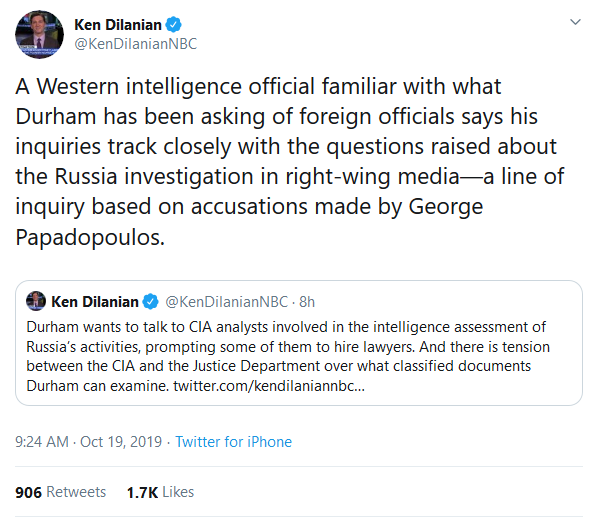 “It was not clear what potential crime Mr. Durham is investigating, nor when the criminal investigation was prompted.”

“Mr. Trump is certain to see the criminal investigation as a vindication of the years he and his allies have spent trying to discredit the Russia investigation. In May, Mr. Trump told the Fox News host Sean Hannity that the F.B.I. officials who opened the case — a counter-intelligence investigation into whether his campaign conspired with Moscow’s election sabotage — had committed treason.”

“We can never allow these treasonous acts to happen to another president,” Mr. Trump said. He has called the F.B.I. investigation one of the biggest political scandals in US history.”

“Federal investigators need only a “reasonable indication” that a crime has been committed to open an investigation, a much lower standard than the probable cause required to obtain search warrants. However, “there must be an objective, factual basis for initiating the investigation; a mere hunch is insufficient,” according to Justice Department guidelines.”

“When Mr. Barr appointed Mr. Durham, the US attorney in Connecticut, to lead the review, he had only the power to voluntarily question people and examine government files.”

“Mr. Barr expressed skepticism of the Russia investigation even before joining the Trump administration. Weeks after being sworn in this year, he said he intended to scrutinize how it started and used the term “spying” to describe investigators’ surveillance of Trump campaign advisers. But he has been careful to say he wants to determine whether investigators acted lawfully.”

“The question is whether it was adequately predicated,” he told lawmakers in April. “And I’m not suggesting that it wasn’t. But I need to explore that.”

Link to  article: nytimes.com/  Justice Dept. Is Said to Open Criminal Inquiry Into Its Own Russia Investigation 2019/…

As per a 9/27/2019 BuzzFeed op-ed piece,  Opinion: Impeach William Barr” by a frequent legal expert guest on MSNBC cable news shows, Maya Wiley “(“As a former assistant US attorney, I thought Barr’s past service as attorney general meant he would respect the rule of law. I was wrong.”)

“At the time of Barr’s appointment, we were comparing him to the ethically challenged and significantly less qualified Matthew Whitaker. Barr had the credentials, having served as attorney general under George H.W. Bush and, presumably, he had an investment both in his legacy and in the importance of the DOJ as a respected institution.”

“But it’s now clear that Attorney General Barr deserves an impeachment inquiry, regardless of the outcome, because trust in government requires it.”

“While we have never impeached a sitting US attorney general, the facts emerging from the national security whistleblower complaint have raised calls for Barr’s recusal from any involvement in DOJ actions around it. But while recusal is necessary, it is also insufficient. As a former assistant United States attorney in the Civil Division, I know that without trust in our laws and their guardians, more people feel justified in breaking more laws, and the government loses its credibility.”

“The whistleblower complaint makes three deeply disturbing charges. First, that President Trump engaged a foreign government to aid his campaign for reelection, second, that White House staff helped to hide the evidence, and third, that White House lawyers participated in some way. We know that Trump asked Ukraine’s president to meet with Barr and the president’s personal attorney Rudy Giuliani, to get dirt on candidate Joe Biden.”

“The Trump-appointed inspector general found this complaint “credible” and “urgent.” So did the president also ask Barr to meet with the Ukrainians? And if he did, how did Barr respond? While the DOJ issued a statement denying that Barr had discussions with the president about Ukraine, Barr and his office were involved in determining whether the president may have violated the law. The public should not be required to take the DOJ statement as proof.”

“When the acting director of National Intelligence received the complaint to send to Congress as required by law, he contacted the Department of Justice. The DOJ made the baffling determination that the complaint was not subject to the law requiring oversight. Was Barr was directly engaged in that decision? It’s difficult to believe the president didn’t ask Barr to contact Ukrainian officials or that, given the president was the subject of the complaint, that Barr wasn’t engaged in discussions of the complaint.”

“We need answers to these questions.”

“And yet, there is more. Federal prosecutors named Donald Trump “Individual 1,” in a campaign finance crime. Yet further investigation into the role of the Trump Organization in hiding hush payments to Stormy Daniels and Karen McDougal, an apparent campaign finance crime, was abruptly dropped, raising eyebrows among former members of that office. Did Barr have a hand in that? And how much did he know about the “pattern of obfuscation” raised in the whistleblower complaint?”