Remember the Flint, Michigan problem that became public around 2015 where Flint’s children tested positive for having high levels of lead poisoning due to GOP government officials not adequately  treating a new water supply source and its pipes.

Five years later, there’s still work to be done even though it appears the project of cleaning up the lead pipe problems is in the final stages.

This means that the former NYC Mayor Mike Bloomberg could have easily swooped in as the hero of Flint, Michigan, by insuring that all the pipes with lead issues have been exchanged with new ones.  It’s the GOP penchant for cutting government spending that caused this lead seepage into its water supply system, followed up by the Democratic Party officials being slow in fixing the resulting mess within the African-American majority community of Flint. Mr. Bloomberg stepping into this picture could have been a hero while acting in sync with his marketing campaign theme that he’s the one candidate who knows how to get things done. In addition, he could have scored high marks among the Black voters.

There are many similar type projects that the former NYC mayor and business man with his high powered team could have taken on, to show by actions how he as an outsider could take on the likes of President Trump. He needed to make up for his past deeds and not just apologize for his history of having supported “stop and frisk” policies when he was NYC’s mayor that has soured those in predominantly in minority neighborhoods.

This memory was on full display when on 3/1/2020, Mr. Bloomberg showed up to participate in a Selma, Alabama reenactment of the 1965 bloody civil right’s event. This is where US Representative John Lewis who’s suffering from 4th stage of pancreatic cancer, delivered an inspiring message at the Brown Chapel AME Church. But while Mr. Bloomberg was speaking at the front, many in the audience turned their backs to him. Great ads will not fix this hurt.

By the way, guess who was the only Democratic Party front runner (top 5) who did not show up to the above event. It was non other than Senator Bernie Sanders.

Mr. Bloomberg cannot hope to win enough delegates to prevail on Super Tuesday (3/4/2020) without more support from the Black community of voters.

In the near future, Mr. Bloomberg needs to face the above reality by figuring a way to exit this campaign in a statesman-like manner.

“Nearly 1,000 residences still need their service lines checked for lead as Flint works through the final stages of its pipe replacement program.”

“Lawyers with the Natural Resources Defense Council, who represented Flint residents in a $97 million settlement to replace the city’s lead and galvanized service lines, said the city still needs permission from roughly 1,000 homeowners to check their pipes before the program wraps up work next year.”

“The city’s economic decline began during the 1980s, when GM downsized.”

“In 2011, the state of Michigan took over Flint’s finances after an audit projected a $25 million deficit.”
***
“In order to reduce the water fund shortfall, the city announced that a new pipeline would be built to deliver water from Lake Huron to Flint. In 2014, while the pipeline was under construction, the city turned to the Flint River as a water source. Soon after the switch, residents reported changes to the water’s color, smell and taste.”
*** 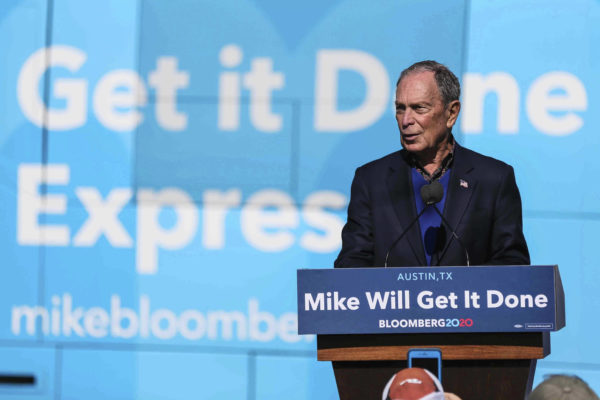 ***
“Tests in 2015 by the Environmental Protection Agency (EPA) and Virginia Tech indicated dangerous levels of lead in the water at residents’ homes.”
***
“Lead consumption can affect the heart, kidneys and nerves. Health effects of lead exposure in children include impaired cognition, behavioral disorders, hearing problems and delayed puberty.”
***
“A class-action lawsuit charged that the state wasn’t treating the water with an anti-corrosive agent, in violation of federal law. As a result, the water was eroding the iron water mains, turning the water brown. Additionally, about half of the service lines to homes in Flint are made of lead and because the water wasn’t properly treated, lead began leaching into the water supply, in addition to the iron.”
***
“Overall, more than a dozen lawsuits, including several additional class-action suits, were filed against Michigan and the city of Flint, as well as various state and city officials and employees involved in the decision to switch the source of the drinking water and those responsible for monitoring water quality. The range of remedies sought included monetary compensation for lead poisoning and refunds for water bills.”
***

March 22, 2012 -“Genesee County announces a new pipeline is being designed to deliver water from Lake Huron to Flint. The plan is to reduce costs by switching the city’s water supplier from the Detroit Water and Sewerage Department (DWSD) to the Karegnondi Water Authority (KWA).”

April 16, 2013 – “On the city council’s recommendation, Andy Dillon, the state treasurer, authorizes Flint to make the switch to Flint River water.”
***
April 25, 2014 – “The switch to water from the Flint River takes place.”
***
August 14, 2014 – “The city announces fecal coliform bacterium has been detected in the water supply, prompting a boil water advisory for a neighborhood on the west side of Flint. The city boosts the amount of chlorine in the water and flushes the system. The advisory is lifted on August 20.”
***

***
September 5, 2014 – “Flint issues another boil water advisory after a positive test for total coliform bacteria. The presence of this type of bacteria is a warning sign that E. coli or other disease-causing organisms may be contaminating the water. City officials tell residents they will flush the pipes and add more chlorine to the water. After 4 days, residents are told they can safely resume drinking water from the tap.”
***
October 1, 2014 – “The Michigan Department of Environmental Quality (MDEQ) issues a governor’s briefing paper outlining possible causes for the contamination issues. Among the problems are leaking valves and aging cast iron pipes susceptible to a buildup of bacteria. The MDEQ concludes flushing the system and increasing chlorine in the water will limit the number of boil water advisories in the future.”
***
October 2014 – “The General Motors plant in Flint stops using the city’s water due to concerns about high levels of chlorine corroding engine parts. The company strikes a deal with a neighboring township to purchase water from Lake Huron in lieu of using water from the Flint River. The switch is anticipated to cost the city $400,000.”
*** 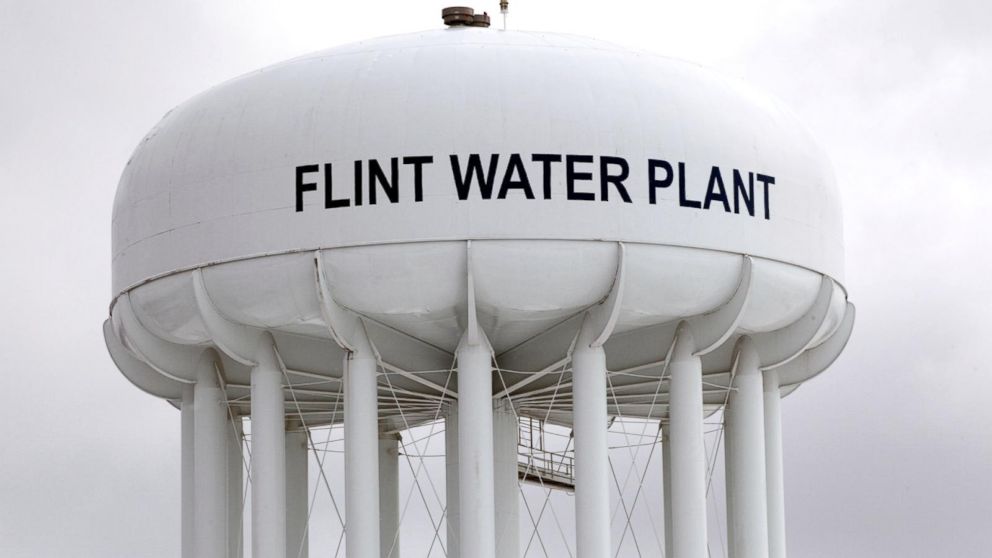 ***
January 2, 2015 – “The city warns residents the water contains byproducts of disinfectants that may cause health issues including an increased risk for cancer over time. The water is deemed safe for the general population, but the elderly and parents of young children are cautioned to consult with their doctors.”
***
January 12, 2015 – “The DWSD offers to reconnect the city with Lake Huron water, waiving a $4 million fee to restore service. City officials decline, citing concerns water rates could go up more than $12 million each year, even with the reconnection fee waiver.”
***
January 21, 2015 – “Residents tote jugs of discolored water to a community forum. The Detroit Free Press reports children are developing rashes and suffering from mysterious illnesses.”
***

***
February 2015 – “The MDEQ notes some “hiccups” in the transition, including a buildup of TTHM, a cancer-causing byproduct of chlorine and organic matter. In a background paper submitted to Governor Rick Snyder, the MDEQ states that elevated TTHM levels are not an immediate health emergency because the risk of disease increases only after years of consumption. Snyder announces a $2 million dollar grant to fix problems in the pipes and sewers.”
***
February 26, 2015 – “The EPA notifies the MDEQ it has detected dangerous levels of lead in the water at the home of Flint resident Lee-Anne Walters. A mother of four, she had first contacted the EPA with concerns about dark sediment in her tap water possibly making her children sick. Testing revealed that her water had 104 parts per billion (ppb) of lead, nearly seven times greater than the EPA limit of 15 ppb.”
***
March 18, 2015 – “Walters follows up with the EPA after another test indicates the lead level in her water is 397 ppb.”
*** 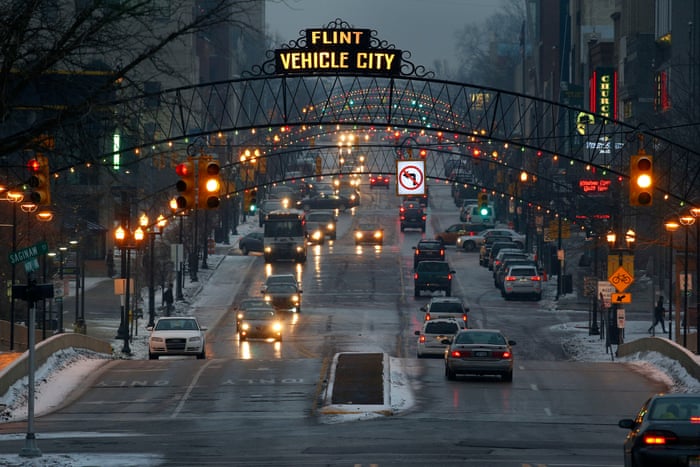 ***
March 23, 2015 – “Flint City Council members vote 7-1 to stop using river water and to reconnect with Detroit. However, state-appointed emergency manager Jerry Ambrose overrules the vote, calling it “incomprehensible,” claiming that costs would skyrocket and that “water from Detroit is no safer than water from Flint.”
***
June 5, 2015 – “A group of clergymen and activists files a lawsuit against the city, charging that the river water is a health risk. The city attorney later says the lawsuit is baseless. The case is dismissed in September.”
***
June 24, 2015 – “An EPA manager issues a memo, “High Lead Levels in Flint,” warning that the city isn’t providing corrosion control treatment to mitigate the presence of lead in drinking water. According to the memo, scientists at Virginia Tech tested tap water from Walters’ home and found the lead level was as high as 13,200 ppb. Water contaminated with 5,000 ppb of lead is classified by the EPA as hazardous waste. Three other homes also have high lead levels in the water, according to the memo. Walters shares the memo with an investigative reporter from the ACLU, Curt Guyette.”
*** 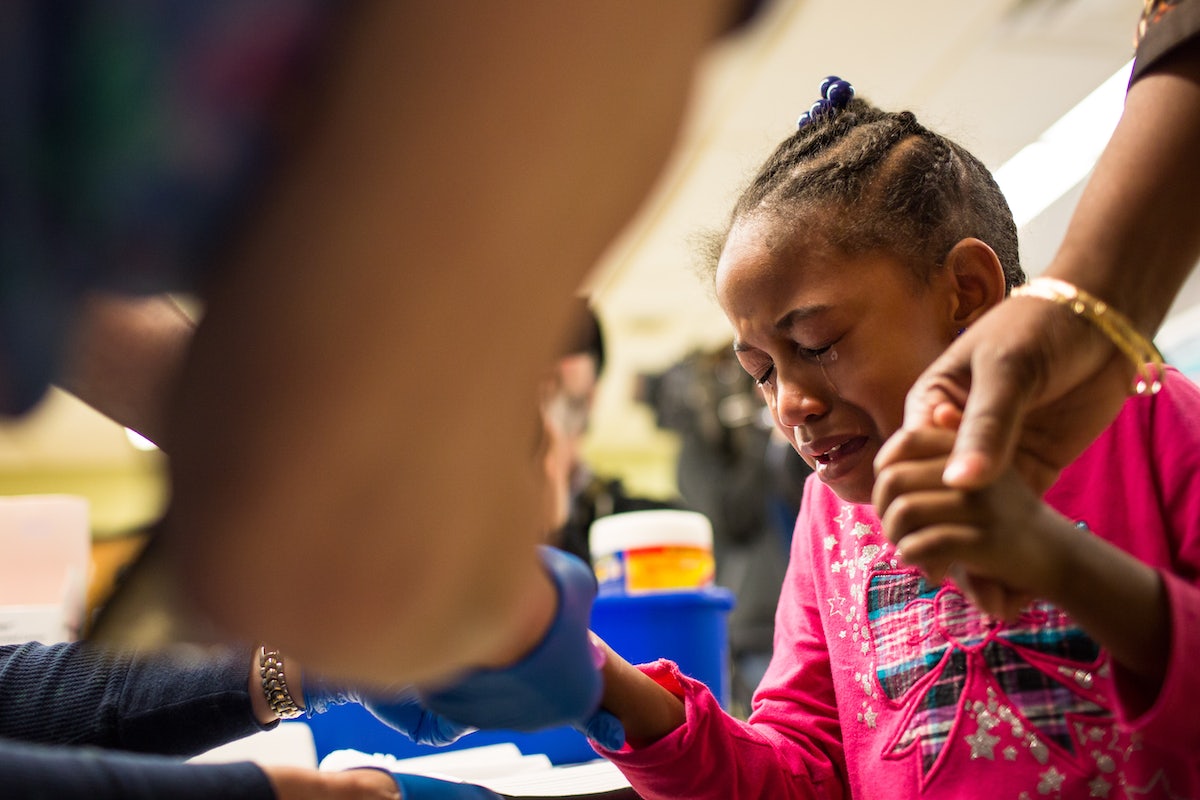 ***
July 9, 2015 – “The ACLU posts a video about the lead in Walters’ water. Flint Mayor Dayne Walling drinks a cup of tap water on a local television report to ensure residents that it is safe.”
***
July 13, 2015 – “After the EPA memo is leaked by the ACLU, a spokesman for the MDEQ tells Michigan Public Radio, “Anyone who is concerned about lead in the drinking water in Flint can relax.” He explains initial testing on 170 homes indicates that the problem is not widespread.”
***
July 22, 2015 – “Snyder’s chief of staff, Dennis Muchmore, emails the Department of Community Health in response to reports by the ACLU and on public radio. “I’m frustrated by the water issue in Flint. I really don’t think people are getting the benefit of the doubt. Now they’re concerned and rightfully so about the lead level studies they are receiving from DEQ [MDEQ] samples. Can you take a moment out of your impossible schedule to personally take a look at this?”
*** 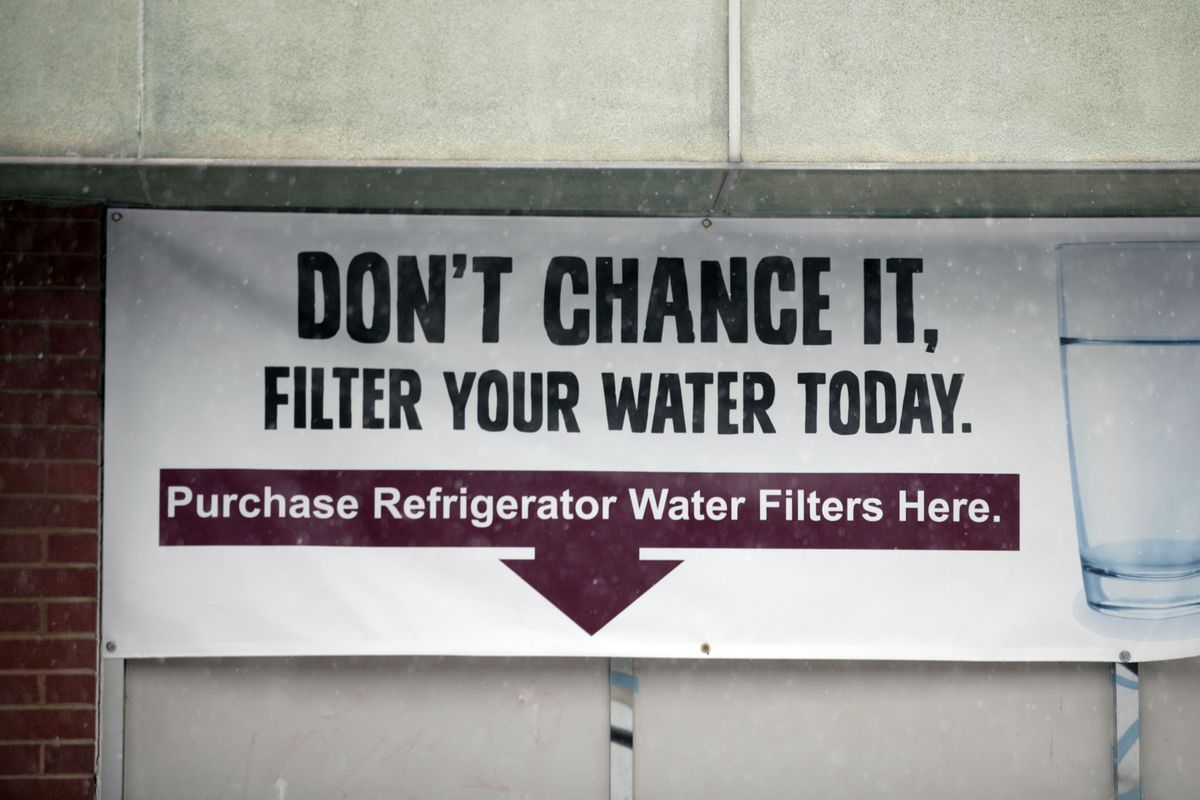 ***
August 17, 2015 – “The MDEQ orders Flint to optimize corrosion control treatment in the water supply after state testing from the first six months of 2015 reveals elevated lead levels.”
***
September 8, 2015 – “A team from Virginia Tech that conducted a water quality study issues a preliminary report indicating 40% of Flint homes have elevated lead levels.”
***
September 9, 2015 – “The EPA announces it’ll assist Flint in developing a corrosion control treatment for the water. The next day, MDEQ spokesman Brad Wurfel tells the Flint Journal the city needs to upgrade its infrastructure, but he also expresses skepticism about the Virginia Tech study.”
***
September 11, 2015 – “After concluding that Flint water is 19 times more corrosive than Detroit water, Virginia Tech recommends the state declare that the water is not safe for drinking or cooking. The river water is corroding old pipes and lead is leaching into the water, according to the study.”
***

***
October 15, 2015 – “Snyder signs a spending bill appropriating $9.35 million to help Flint reconnect with Detroit for water and provide health services for residents.”
***
October 16, 2015 – “The city switches back to Detroit water. Residents are cautioned that it’ll take weeks for the system to be properly flushed out and there may be lingering issues. The EPA establishes a Flint Safe Drinking Water Task Force.”
***
November 4, 2015 – “The EPA publishes a final, redacted version of its report on high lead levels in 3 Flint homes.”
***
November 13, 2015 – “Residents file a federal class action lawsuit claiming 14 state and city officials, including Snyder, knowingly exposed Flint residents to toxic water.”
***
December 14, 2015 – “Flint declares a state of emergency.”