He Saw It Coming But Yes, Trump Was Slow In Reacting To COV-19 Pandemic

Every single day, the republican President Donald J. Trump tells the world in his televised press briefings that he has been doing the best possible job with his handling of the US coronavirus COV-19 pandemic beginning in early January 2020.

The vast majority of Americans aren’t buying the presidents delusional evaluation of his fabulous performance during this Spring 2020 viral pandemic crisis.

As per a 4/18/2020 Hill report by Justin Wise, “Poll: Majority of Americans disapprove of Trump’s handling of coronavirus outbreak”

“A majority of American voters disapprove of President Trump‘s handling of the coronavirus outbreak and believe he did not take the pandemic seriously enough at the beginning of the crisis, according to a new NBC News-Wall Street Journal poll.”

“The survey found that 52 percent of voters disapprove of Trump’s response to the global outbreak, while 44 percent approve of it.”

David Sarokin, a microbiologist who formerly worked for the EPA wrote a letter to the editor which was published on 4/13/2020 by the NY Times, explaining how the USA under the current leadership of President Trump has under-performed when compared to other heads of state.

“Oxford University has been ranking the stringency of government actions in response to Covid-19, comparing the efforts of six countries hard hit by the virus (China, South Korea, Italy, France, the United Kingdom and the United States). Its timeline shows that the United States was one of the slowest countries to respond and was late in ramping up its efforts. Its most recent data (as of April 5) puts the U.S. response in last place among the six nations. As a result, we are now first place in the number of Covid-19 deaths.”

“The United States may well have the best and most experienced cadre of pandemic expertise in the world, and we certainly have the resources to launch a robust effort in preventing the spread of novel diseases. Our poor response to Covid-19 reflects weaknesses in long-term preparation and planning as well as a failure of current leadership.”

“As additional waves of the virus work their way through the population, and as future diseases present themselves, we must either do a much better job of containment or be prepared to face even greater social disruption and an unprecedented loss of life.”

The following NY Times piece details how the president failed miserably on several levels to confront the challenges presented by the COV-19 pandemic that landed on US soil in early January 2020 when he had been amply informed by numerous experts on multiple occasions.

President Trump’s latest move in his blame game has been to point his finger at China and the World Health Organization (WHO) for failing to succeed in fighting back this pandemic when it was his gut which led him to fire a US CDC representative located in China, just before the Chinese were faced with this virulent pandemic, and to discount/ ignore several US scientists who took time to warn him in a timely manner about the seriousness of this imminent danger. 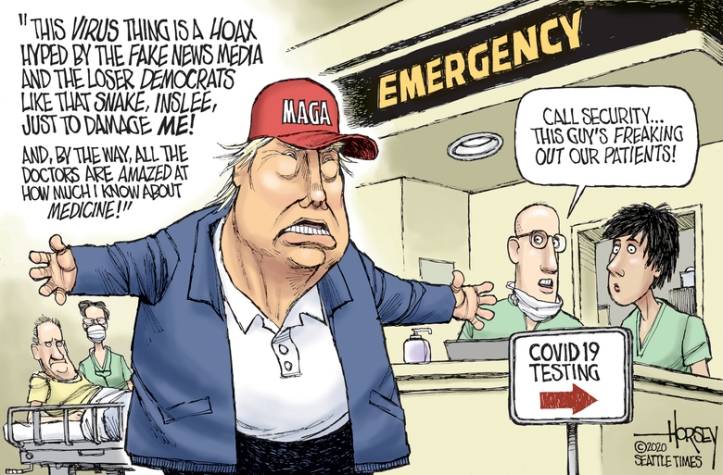 As per the 4/11/2020 New York Times report, “He Could Have Seen What Was Coming: Behind Trump’s Failure on the Virus” by Eric Lipton, David E. Sanger, Maggie Haberman, Michael D. Shear, Mark Mazzetti and Julian E. Barnes:

“An examination reveals the president was warned about the potential for a pandemic but that internal divisions, lack of planning and his faith in his own instincts led to a halting response.”

“The shortcomings of Mr. Trump’s performance have played out with remarkable transparency as part of his daily effort to dominate television screens and the national conversation.”

“But dozens of interviews with current and former officials and a review of emails and other records revealed many previously unreported details and a fuller picture of the roots and extent of his halting response as the deadly virus spread:” “The National Security Council office responsible for tracking pandemics received intelligence reports in early January predicting the spread of the virus to the United States, and within weeks was raising options like keeping Americans home from work and shutting down cities the size of Chicago. Mr. Trump would avoid such steps until March.”

“Despite Mr. Trump’s denial weeks later, he was told at the time about a Jan. 29 memo produced by his trade adviser, Peter Navarro, laying out in striking detail the potential risks of a coronavirus pandemic: as many as half a million deaths and trillions of dollars in economic losses.”

“The health and human services secretary, Alex M. Azar II, directly warned Mr. Trump of the possibility of a pandemic during a call on Jan. 30, the second warning he delivered to the president about the virus in two weeks. The president, who was on Air Force One while traveling for appearances in the Midwest, responded that Mr. Azar was being alarmist.” “Mr. Azar publicly announced in February that the government was establishing a “surveillance” system in 5 American cities to measure the spread of the virus and enable experts to project the next hot spots. It was delayed for weeks. The slow start of that plan, on top of the well-documented failures to develop the nation’s testing capacity, left administration officials with almost no insight into how rapidly the virus was spreading. “We were flying the plane with no instruments,” one official said.”

“By the third week in February, the administration’s top public health experts concluded they should recommend to Mr. Trump a new approach that would include warning the American people of the risks and urging steps like social distancing and staying home from work. But the White House focused instead on messaging and crucial additional weeks went by before their views were reluctantly accepted by the president — time when the virus spread largely unimpeded.”

“When Mr. Trump finally agreed in mid-March to recommend social distancing across the country, effectively bringing much of the economy to a halt, he seemed shellshocked and deflated to some of his closest associates. One described him as “subdued” and “baffled” by how the crisis had played out. An economy that he had wagered his re-election on was suddenly in shambles.” “He only regained his swagger, the associate said, from conducting his daily White House briefings, at which he often seeks to rewrite the history of the past several months. He declared at one point that he “felt it was a pandemic long before it was called a pandemic,” and insisted at another that he had to be a “cheerleader for the country,” as if that explained why he failed to prepare the public for what was coming.”

“Mr. Trump’s allies and some administration officials say the criticism has been unfair. The Chinese government misled other governments, they say. And they insist that the president was either not getting proper information, or the people around him weren’t conveying the urgency of the threat. In some cases, they argue, the specific officials he was hearing from had been discredited in his eyes, but once the right information got to him through other channels, he made the right calls.”

“While the media refused to seriously acknowledge this virus in January and February, President Trump took bold action to protect Americans and unleash the full power of the federal government to curb the spread of the virus, expand testing capacities and expedite vaccine development even when we had no true idea the level of transmission or asymptomatic spread,” said Judd Deere, a White House spokesman.” “There were key turning points along the way, opportunities for Mr. Trump to get ahead of the virus rather than just chase it. There were internal debates that presented him with stark choices, and moments when he could have chosen to ask deeper questions and learn more. How he handled them may shape his re-election campaign. They will certainly shape his legacy.”

“By the last week of February, it was clear to the administration’s public health team that schools and businesses in hot spots would have to close. But in the turbulence of the Trump White House, it took 3 more weeks to persuade the president that failure to act quickly to control the spread of the virus would have dire consequences.”

Despite Timely Alerts, Trump Was Slow to Act