The exact numbers of the GOP MAGA House Freedom Caucus members in the next Congress haven’t yet been finalized. Rep Lauren Boebert is still in a tight race in Colorado’s 3rd district against Democrat Adam Frisch and so is, Representative David Schweikert from AZ 6th district. I expect both to win. What’s amazing is that both of them are from very red districts which should not have been so competitive.

I’m estimating that there will be about 47 Freedom Caucus members in the new 118th Congress. Their power stems from its group’s strategy in maintaining a solid caucus of ultraconservative members who can block any legislation even when proposed by their own party because of the Hastert rule, where a majority of House republicans have to be in 80% agreement before anything can move forward.

Currently, it’s expected that there will be 221 Republican Party lawmakers out of a total of 435 members in the US House. It takes a minimum of 218 members to be in the majority.

It’s time for Dems and moderate GOP members from states which favored candidates who were NOT election deniers to latch on to the lifeline of bipartisanship. They then could eliminate the Hastert rule. Within the next couple of weeks, if House Democrats with non-election denier Republicans don’t figure a work-a-round to this Hastert rule, 2 issues in particular could place our country and its national security interests in jeopardy, the debt limit and aid to Ukraine.

The ending of this one tactic could block the outsized power exerted by a minority group of Freedom Caucus members steeped in Trumpism, supporters of election deniers, traffickers of QAnon conspiracy theories, apologists for Russia, etc. These are the ones who look forward to conducting those circus-like hearings where they can yell, scream, demean witnesses for show, and demand government shutdowns whenever they don’t get their way.

They’ve managed the ouster of 2 former GOP Speakers, Paul Ryan and John Boehner, whom they describe as RINOs. If Rep Mcarthy gets his speakership, the bookies will be taking bets on his tenure.

and Republicans Barely Won the House. Now Can They Run It? 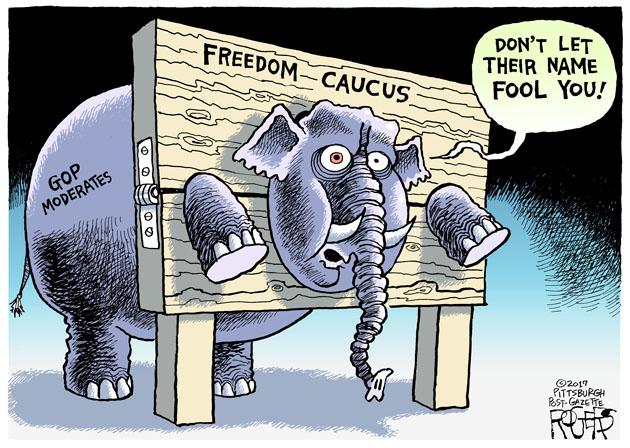 “The caucus originated during the mid–January 2015 Republican congressional retreat in Hershey, Pennsylvania. According to founding member Mick Mulvaney, “that was the first time we got together and decided we were a group, and not just a bunch of pissed-off guys”. Nine conservative active Republican members of the House began planning a new congressional caucus separate from the Republican Study Committee and apart from the House Republican Conference. The founding members who constituted the first board of directors for the new caucus were Republican representatives Scott Garrett of NJ, Jim Jordan of Ohio, John Fleming of Louisiana, Matt Salmon of Arizona, Justin Amash of Michigan, Raúl Labrador of Idaho, Mulvaney, of SC, Ron DeSantis of Florida and Mark Meadows of NC.”

“Following the election of Donald Trump, Mick Mulvaney said “Trump wants to turn Washington upside down — that was his first message and his winning message. We want the exact same thing. To the extent that he’s got to convince Republicans to change Washington, we’re there to help him … and I think that makes us Donald Trump’s best allies in the House.”

Why the Small Freedom Caucus Is a Big Deal

“The Freedom Caucus represents but a small fraction of the 435-member House. But as a voting bloc, they hold sway over the House Republican Conference, which seeks support from at least 80% of its members for any move to be considered binding.”

“Choosing their fights carefully, the Freedom Caucus has certainly made an impact since its formation,” wrote the Pew Research Center’s Drew DeSilver.”

“How does such a small group get to have such a big say? Simple arithmetic: Currently, Republicans have 247 seats in the House to 188 for the Democrats, which would seem to be a comfortable majority. But if the 36 (or more) Freedom Caucus members vote as a bloc against the GOP leadership’s wishes, their effective strength falls to 211 or fewer—that is, less than the majority needed to elect a new speaker, pass bills and conduct most other business.”

“While the makeup of the House has changed since then, the strategy remains the same: to maintain a solid caucus of ultraconservative members who can block action on legislation they oppose even if their own party, the Republicans, control the House.”

Although House Republicans will be facing a Democratic White House and Senate aimed at limiting their plans to act out in unproductive ways, until January 2023, the GOP MAGA House minority leader Kevin McCarthy is working overtime to be the next House speaker despite growing discontent in his ranks. He knows that the 47 members of the House’s Freedom Caucus represent GOP MAGA voters who are demanding payback investigations into President Biden’s administration. Even with the Republican Party’s very slim majority position in the US House of Representatives, the aspiring speaker intends to cater to this faction.

As per the 11/17/2022 NBC report, House Republicans plan investigations and possible impeachments with new majority by Scott Wong:

“The era of one-party Democrat rule in Washington is over. Washington now has a check and balance. The American people have a say in their government,” McCarthy, flanked by his new leadership team, said Tuesday after he won his race to be the party’s nominee for speaker.

Here’s what the new 118th Congress will look like under House GOP rule:

“Investigations will dominate the new Congress, from the origins of the Covid-19 pandemic and allegations of politicization at the Justice Department to America’s botched withdrawal from Afghanistan. But none will attract as much attention as the GOP’s planned investigation into the business dealings of the president’s son Hunter two years before a potential Biden re-election bid.”

“Rep. James Comer, R-Ky., the incoming Oversight Committee chairman, has said an investigation into Hunter Biden and other Biden family members and associates will be a priority.”

“Republicans allege that Hunter Biden has used his father’s successful political career to enrich himself: He joined the board of a Ukrainian natural gas company in 2019, and an investment firm he co-founded helped a Chinese firm buy a Congolese cobalt mine from a U.S. company in 2016, among other financial endeavors.”

“Hunter and other members of the Biden family have a pattern of peddling access to the highest levels of government to enrich themselves,” Comer said in a statement.”

“At a press conference Thursday (11/17/2022) Comer and other House Republicans made clear that their investigation is focused on the sitting president.”

“We want the bank records and that’s our focus,” Comer said. “We’re trying to stay focused on: Was Joe Biden directly involved with Hunter Biden’s business deals and is he compromised?”

“Comer and Senate Republicans, including Rand Paul of Kentucky, also vow to investigate Dr. Anthony Fauci, the retiring director of the National Institute of Allergy and Infectious Diseases, who became the face of the government’s response to Covid-19 — and a target of the right. Another big thorn in the Biden administration’s side: Rep. Jim Jordan, R-Ohio, a Trump loyalist and former leader of the far-right Freedom Caucus who is poised to chair the powerful Judiciary Committee and will be itching to haul AG Merrick Garland and FBI Director Christopher Wray to Capitol Hill.”

“In a letter to Garland this month, Jordan previewed some of his potential investigations next year, urging the Justice Department to preserve records related to its probe of the conservative group Project Veritas and how it obtained a copy of the diary of the president’s daughter Ashley Biden, the shuttering of the Justice Department’s Trump-era program targeting Chinese spying and the FBI’s search of Trump’s Mar-a-Lago estate in Florida in August.”

“McCarthy has vowed to create a select committee to investigate China. Other GOP members want to form a special panel to investigate the Biden administration’s chaotic and deadly withdrawal of U.S. troops from Afghanistan; a suicide bombing at the Kabul airport killed 13 service members and scores of Afghans.”

As per the 11/10/2022 Newsweek report, “Who Is In House Freedom Caucus? Full List of Members” by Darragh Roche:

Elected Members in the 118th Congress