Dear House Democratic Party Leadership, Do you want to know at least one major reason that the republican President Donald Trump emerged victorious in November 2016 to become the 45th US president? It has to do with only 17% of Americans having any faith left in the concept that their government works for them.

It’s becoming obvious that while Americans aren’t having their needs met on a lot of fronts that our elected US Congressional officials from both sides of the aisle have been more interested in holding on to power than doing what’s right and in the best interests of the American peoples.

Kirsten Gillibrand‏Verified account  tweeted about Flint, MI water problems that have not been resolved by either party after 5 years, as of 7/12/2019:

“What I saw today in Flint is a resilient community that’s still fighting for clean water. Trump may have forgotten about the people of Flint, but I haven’t—and I won’t. “https://medium.com/team-gillibrand/he-broke-it-well-fix-it-91ccfa69d763 … 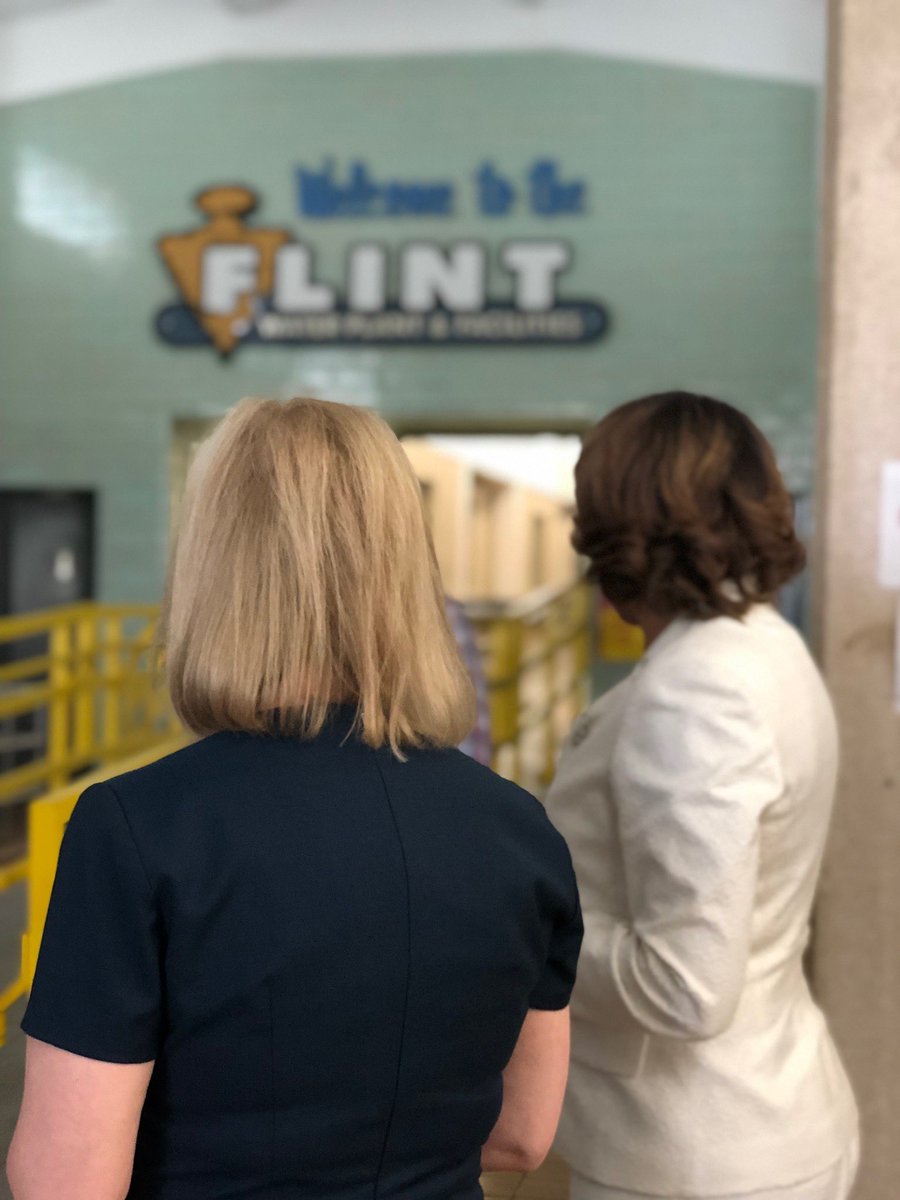 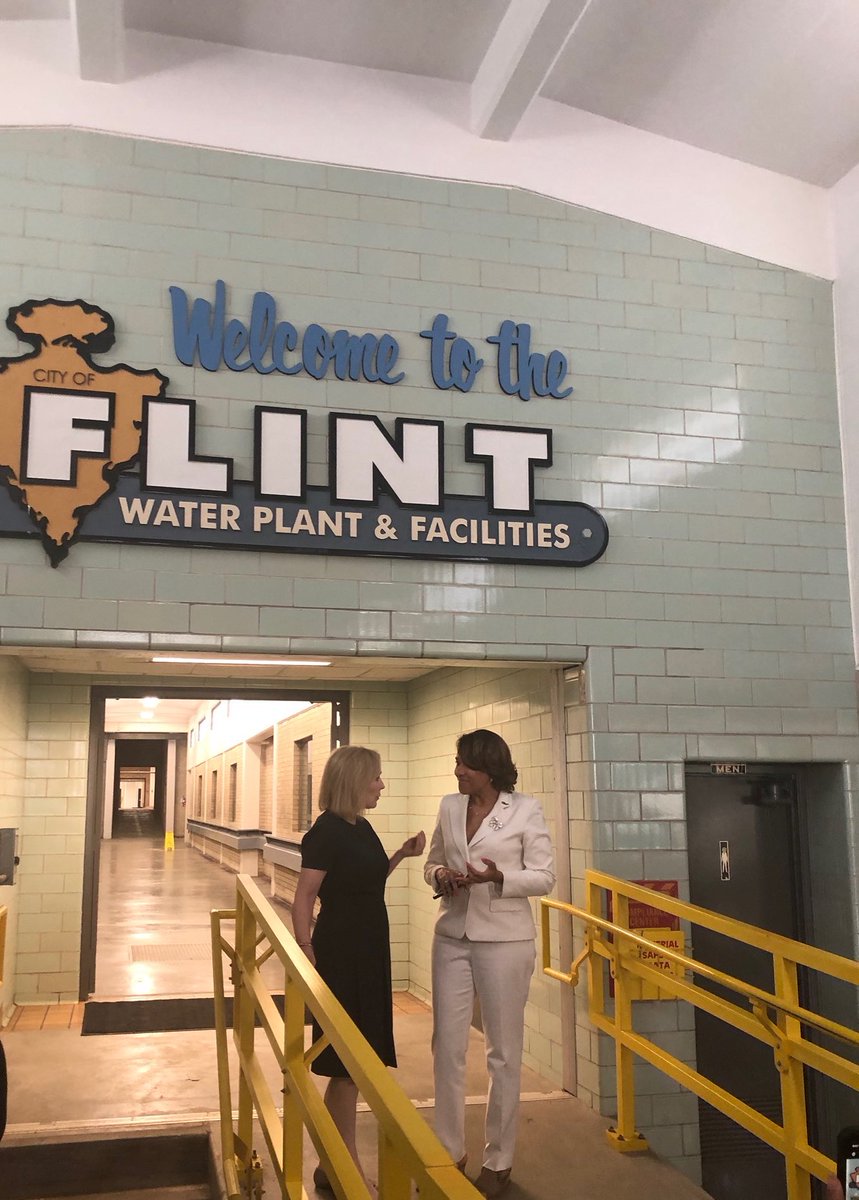 I’ve just reviewed a lot of great bills that have been crafted and passed by the US House since January 2019, but all of them are DOA in the republican controlled US Senate.

There’s this one and only non-legislative tool granted to the US House of Representatives by the US Constitution which doesn’t require the Senate’s input, which is the power for it to initiate an impeachment inquiry/ investigation to hold our lawless president accountable for his numerous crimes, as detailed in the FBI’s 3/22/2019 final report regarding its 22 months long Trump-Russia probe, led by the Special Counsel Robert Mueller III, but the House Democrats are being blocked from acting by their leadership team.

History is watching.  This is the time/ the moment that defines for all time, the action or inaction where the House Democrats, either take the courageous, moral stand or they cower in fear, in standing up to a tyrannical head of state, because of political expediency. “We the People” would like to have our faith restored in a functioning, efficient and effective governing body with a consumer responsive attitude. Please listen to us. 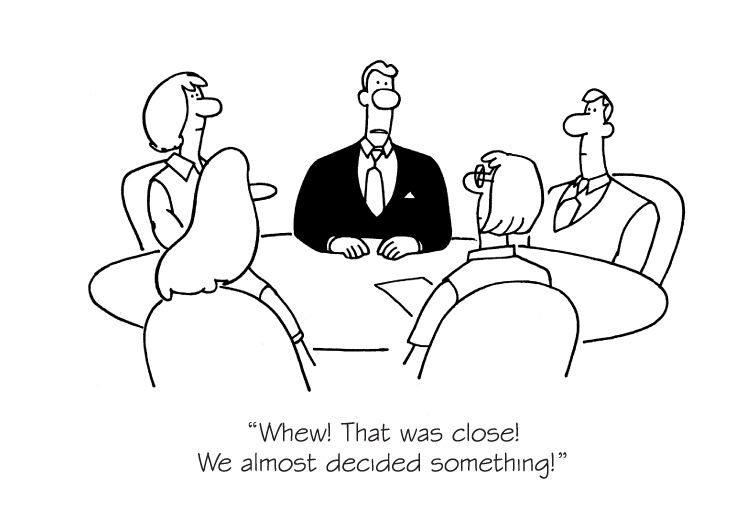 With the current level of House oversight committee hearings not garnering any where near the level of media coverage that the banner of an impeachment inquiry/ investigation would engender, the president is experiencing record high approval ratings.

The House Speaker Pelosi’s chances of maintaining her tenuous Democratic Party majority will be a moot issue if President Trump wins reelection in 2020, which’s a real possibility. While the House initiating an impeachment inquiry/ investigation is a risky move for Speaker Pelosi, her not acting is even a riskier tactic. 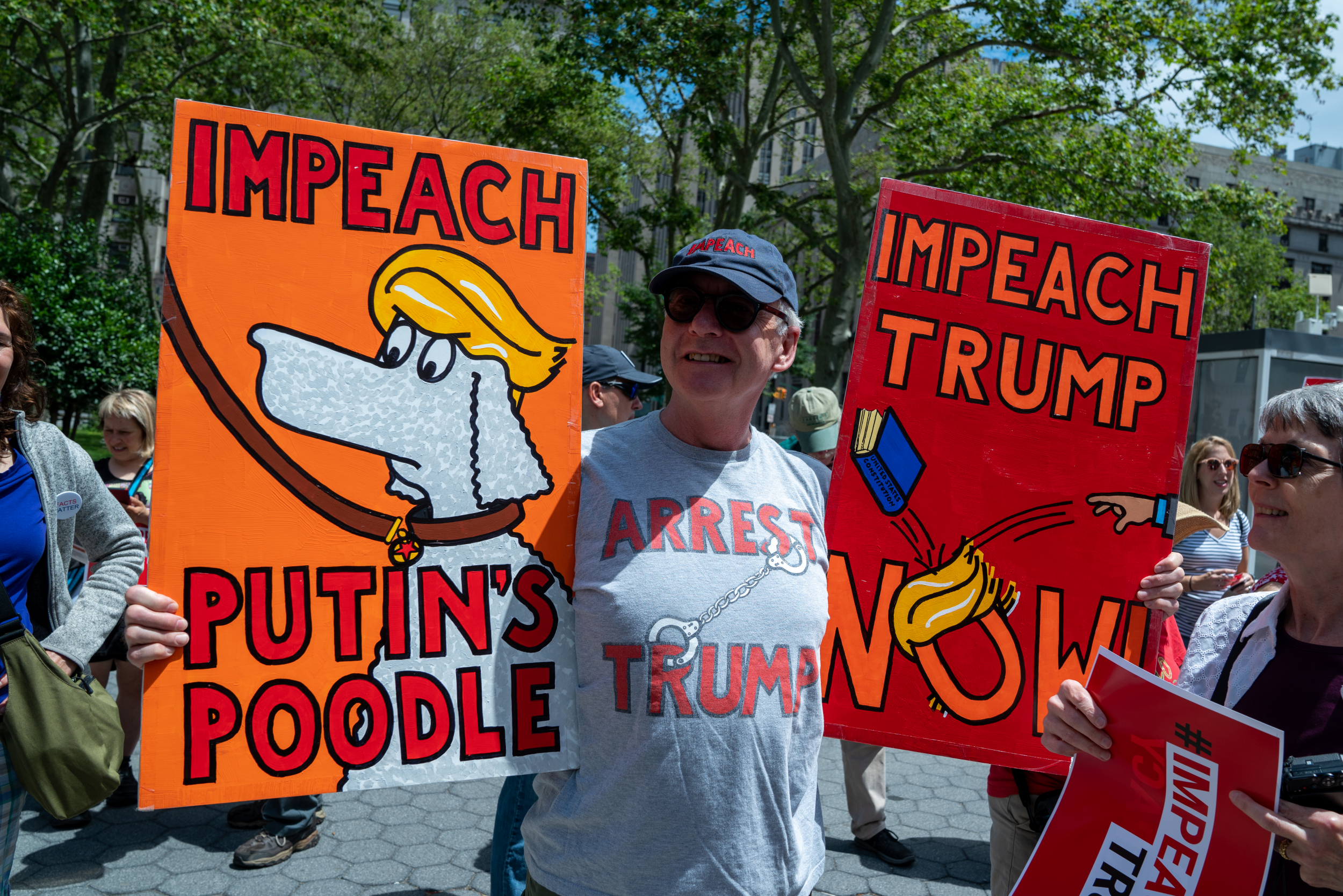 “When the National Election Study began asking about trust in government in 1958, about three-quarters of Americans trusted the federal government to do the right thing almost always or most of the time. Trust in government began eroding during the 1960s, amid the escalation of the Vietnam War, and the decline continued in the 1970s with the Watergate scandal and worsening economic struggles. Confidence in government recovered in the mid-1980s before falling again in the mid-1990s. But as the economy grew in the late 1990s so too did confidence in government. Public trust reached a three-decade high shortly after the 9/11 terrorist attacks, but declined quickly thereafter. Since 2007, the share saying they can trust the government always or most of the time has not surpassed 30%.”

“Currently, 21% of Republicans and Republican-leaning independents say they can trust government, compared with 14% of Democrats and Democratic leaners. Throughout Obama’s tenure, more Democrats than Republicans reported trusting the government, though that has flipped since Trump’s election. Since the 1970s, trust in government has been consistently higher among members of the party that controls the White House than among the opposition party. However, Republicans have been much more reactive than Democrats to changes in political power. Republicans have expressed much higher levels of trust during Republican than during Democratic presidencies, while Democrats’ attitudes have tended to be more consistent.

On July 11, 2019, Eugene Robinson of the Washington Post penned the following opinion piece, “An impeachment inquiry is risky. Not opening one is riskier.”

“House Speaker Nancy Pelosi believes opening an impeachment inquiry into President Trump’s misdeeds would be risky. She needs to realize that not doing so is beginning to look riskier.” 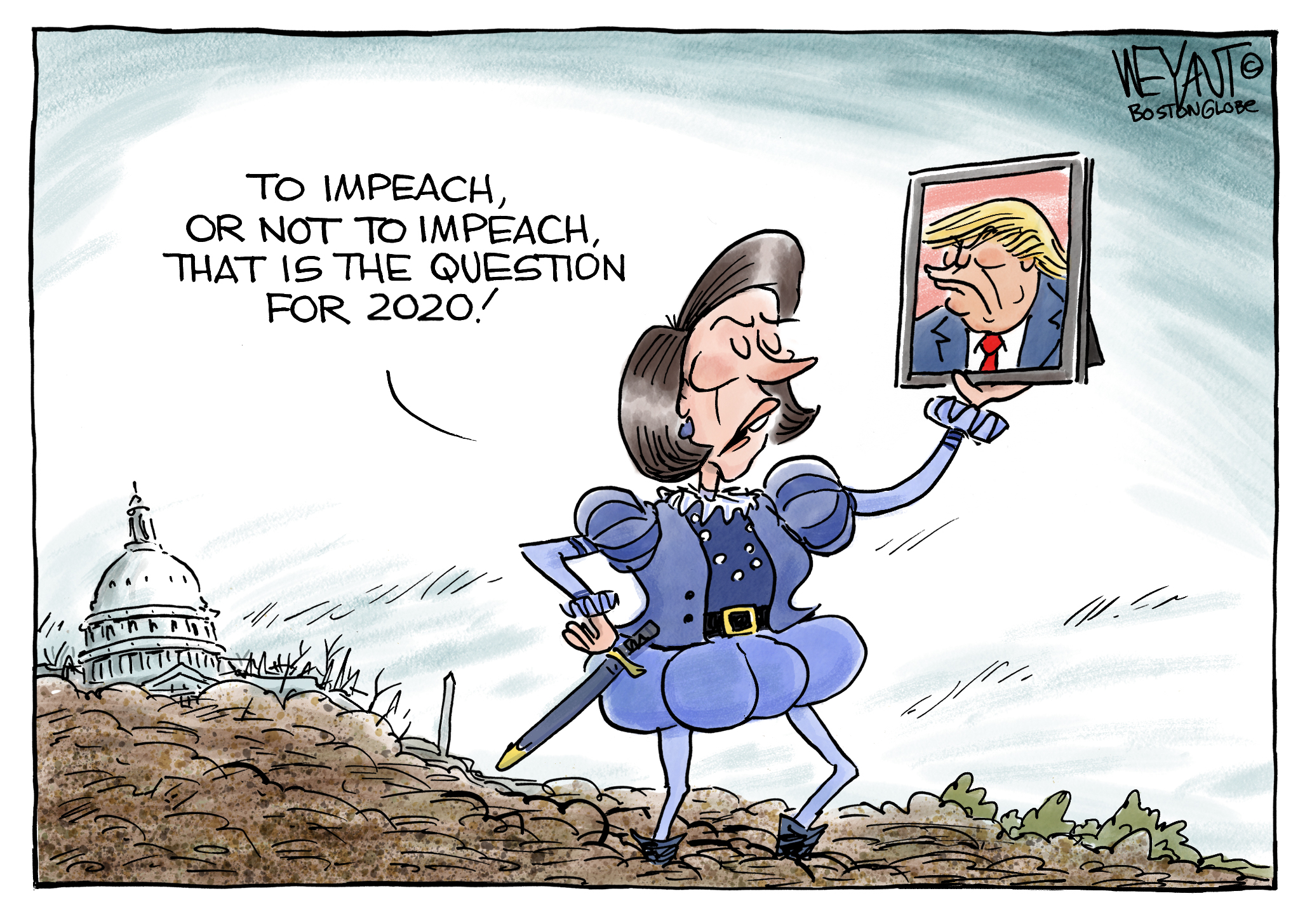 “Next week, after former special counsel Robert S. Mueller III testifies before Congress, the impeachment question will demand an answer. Even if Mueller manages not to stray beyond the boundaries of his report, the evidence of impeachable presidential misconduct that his investigators found is clear and compelling. Hearing from Mueller’s lips what amounts to a criminal indictment of the president will surely have more impact than Mueller’s dry and lengthy tome, which few have actually read.”

“Meanwhile, Trump’s abuse of presidential power, including his open defiance of the judiciary, becomes ever more brazen and alarming. The Supreme Court has no army to enforce its rulings. Only Congress has the power, and the duty, to check a president run amok.”

“I think Pelosi, a Democrat from California, is wrong when she warns that Trump is trying to bait House Democrats into impeachment. I don’t believe for a minute that Trump really wants the stigma and shame of being just the third president to be hauled into the dock. There’s no way he wants yet another asterisk next to his name in the history books.”

“I’ve great respect for the speaker’s political acumen. But after Mueller’s high-profile testimony, what does she imagine Democrats are going to do for a next act? The House Judiciary Committee voted to issue a passel of new subpoenas Thursday, including one for Jared Kushner, the president’s senior adviser and son-in-law. But does anyone think the White House is going to let Kushner testify without a long, drawn-out fight? The administration’s policy of stonewalling congressional demands for documents and testimony may be unlawful, but it’s effective. Getting the courts to intervene takes months. Convening a hearing with an empty chair at the witness table might be an effective public relations ploy — once. After that, it begins to look pathetic.”

“In terms of using public hearings to command attention and educate the nation about Trump’s misdeeds, Mueller’s testimony may be as good as it gets — unless the House opens an impeachment inquiry. That could change things dramatically. Congress’s power to investigate would be at its height, and courts would recognize the obvious need to act speedily to enforce properly constituted subpoenas.”

“If Pelosi’s strategy is to build public support for impeachment with a series of didactic, consciousness-raising committee hearings, it seems to me she’s putting the cart before the horse. Only an impeachment inquiry is likely to produce the kind of witness testimony and documentary evidence that is vivid and compelling enough to shape public opinion.”

“I know Pelosi worries that impeachment might damage the reelection prospects of the moderate House Democrats who won last year in districts that Trump carried in 2016. The speaker’s concern may be justified. But she should also worry about the overall effect on the Democratic Party — including its eventual presidential nominee — of the House appearing to spin its wheels impotently while Trump continues to do whatever he pleases, trampling constitutional norms in the process. In a contest against the most image-conscious of presidents, I don’t think that’s a good look.”

Beyond the political calculation, there’s also the question of what Congress is obliged to do, like it or not.

Mueller’s report provides ample evidence that Trump committed multiple acts of obstruction of justice. Whether Mueller characterizes the report as a road map for impeachment, that’s effectively what it is. Pelosi and other Democrats keep saying that no one is above the law, including the president. But the Justice Department’s view that a sitting president cannot be made to face criminal charges means that Trump is indeed above the law — unless the one body that can hold him accountable, Congress, does its job.

Doesn’t the lawmaking branch of our government have a sacred obligation to uphold the rule of law?